Coffeeland: 8 "Starbucks in Disguise" Inside Disney and Universal Parks 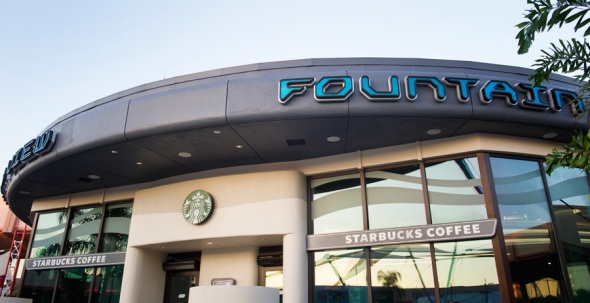 When EPCOT Center opened in 1982, the Sunrise Terrance restaurant was prominently featured in the parenthesis-shaped Communicore West building. After shifting menus over three decades selling fried chicken, then Italian food, then espresso, then ice cream, the restaurant – by that time called Fountain View for its prominent location overlooking Epcot's Fountain of Nations – had developed a very '90s style of neon lights, metallic accents, and saturated color tiles. It was a look that pulled Future World into the past. 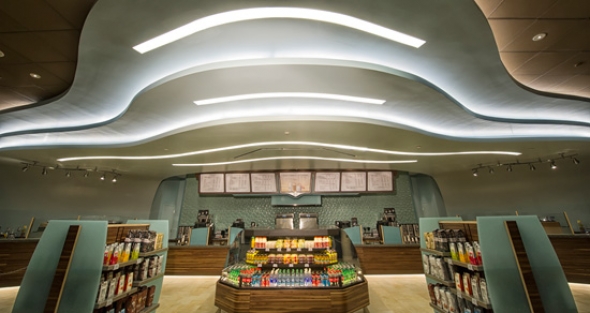 That's why Starbucks' arrival in Epcot wasn't fretted over, but celebrated. True to expectactions, Starbucks' touch massively modernized Fountain View. The building's walls were pushed out (more or less eliminating the restaurant's outdoor seating with its eponymous fountain view) but the reward was a sleek, colorful, and – dare we say? – futuristic spot for a morning coffee. The new Starbucks featured a glowing wave ceiling with glass and wood accents throughout.

While California Adventure and Magic Kingdom's historic, story-based Starbucks use an old-school vintage brass logo, Epcot's went just the opposite direction, adapting a specially-approved transluscent version of Starbucks' fabled siren. It was a cool, smart way of identifying the brand amid Future World's stylized aesthetic. 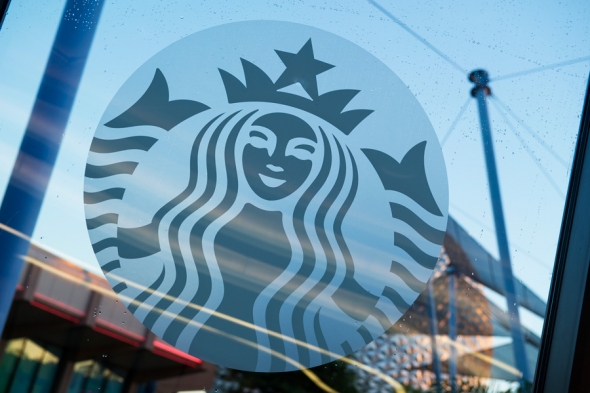 At the bi-annual D23 Expo in 2019, Disney announced an ambitious reimagining of the style and substance of Future World. The transformation would include the unfortunate removal of the iconic Fountain of Nations, which would leave Fountain View without a fountain or a view. That's fine, of course, since all of the Innoventions West building would be torn down, too.

On September 7, 2019, the third Disney Parks Starbucks to open became the first to close. Don't worry – Starbucks was relocated to a temporary, walk-up-only spot closer to the park's entrance, opening just in time for holiday crowds in December 2019. Once all is said and done, the new Epcot's "World Celebration" realm will undoubtedly feature a permanent Starbucks in a much more prominent location. 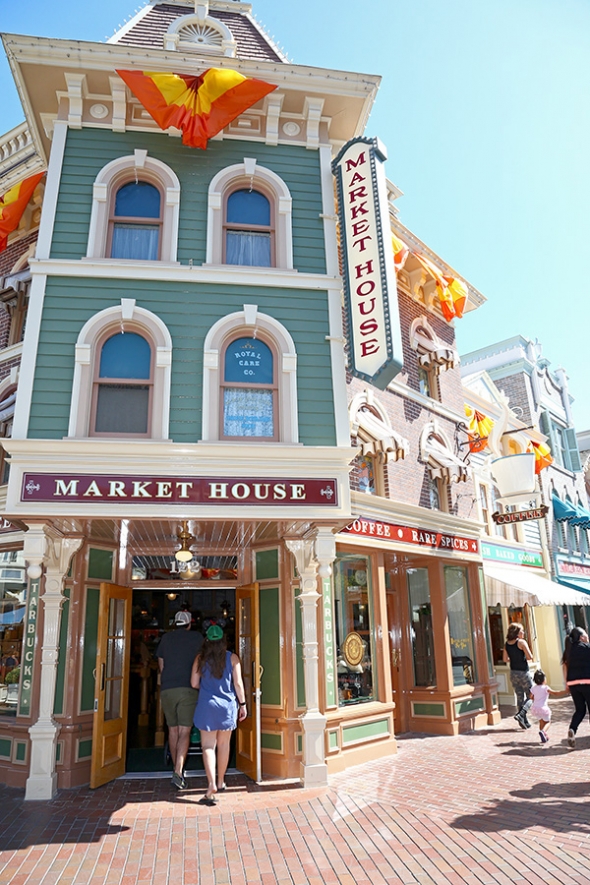 Dropping a Starbucks into Disneyland might've been a major frustration for fans... and not just because the Market House was where Walt's famous 10-cent cups of coffee were. Akin to putting a McDonald's in Frontierland, some fans fought back against the idea of the reality-shattering modern coffee brand being shoehorned into a turn-of-the-century American town. Of course, Disney wouldn't have allowed such an embarassing intrusion, and the transformation of the Market House was done thoughtfully and carefully. 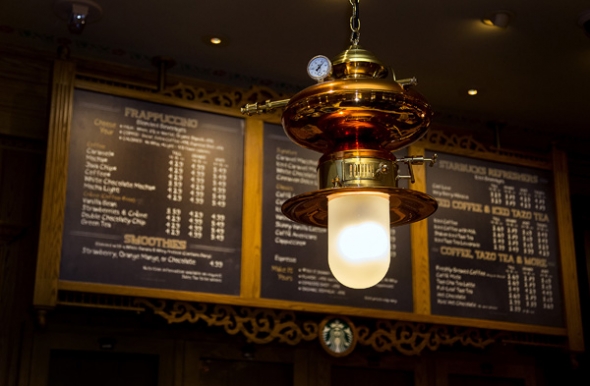 Plus, the Market House was expanded into the nearby Disneyana shop to up the coffee shop's capacity, and in so doing, created a comfortable, warm book nook corner of towering bookshelves that's entirely charming, and completely appropriate for this Main Street. It also means that both Disneyland and Disney California Adventure's Starbucks locations have charming dining rooms to actually sit and relax – a natural fit for the calmer resort compared to the high-capacity, go-go-go Starbucks at Disney World that lack tables or booths. 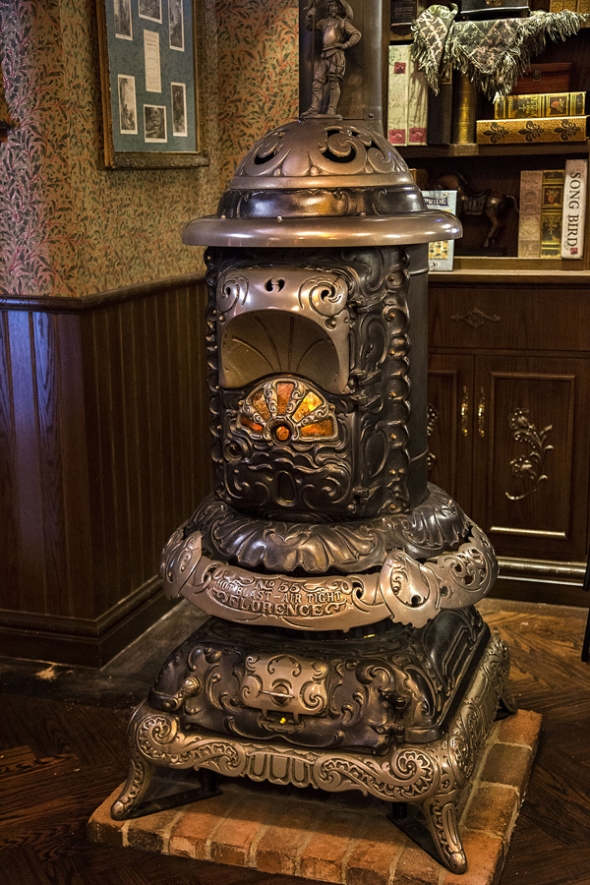 In fact, despite being in the second-busiest theme park on Earth, this may be one of the most attractive Starbucks on Earth, lit by simple brass lamps and encased in a warm, 1900s atmosphere that continues right to baristas' costumes. Smartly, the Market House is located about halfway down Main Street, making it perfectly placed for guests entering, exiting, and circumnavigating the park.

Though Disney didn't open any in-park Starbucks locations in 2014, their competitors did. Just a few miles from Walt Disney World, Universal's Islands of Adventure debuted a Starbucks of its own, in the highly-detailed and beautiful Port of Entry. In keeping with the land's exploratory theme, Starbucks was placed in a beautiful, exotic temple along the park's Great Sea with vines crawling across its northern face and its thick wooden sign.

But once through the ornate entry, guests find themselves in... well... any corporate Starbucks. It's especially unfortunate that Universal wouldn't go the extra mile given 1) that every other shop and restaurant in Port of Entry carefully adheres to the land's ancient and adventurous theme and 2) that Disney was opening its own in-park Starbucks at the same time and using their individualized, park-appropriate theming as part of the draw!

The location replaced Arctic Express, an ice cream walk-up window that opened with the park (and, in a bit of a park history Easter egg, retains a map mural of icy blown winds and swimming penguins on its exterior). It's also perfectly positioned within the land's main entry, but also along the path that circumnavigates the park, giving guests plenty of opportunities for refills.