8 Must-See Theme Park Christmas Celebrations from Across the Country 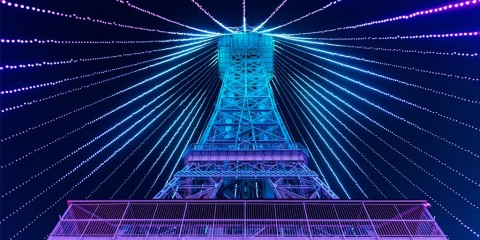 'Tis the season, and across the country, theme parks are ramping up their offerings and appearances for the most wonderful time of the year.

Of course, at Walt Disney World, the festivities are in full swing as guests gather 'round Cinderella Castle and watch it glisten and glow with an icy sheen; sample holiday favorites across World Showcase at Epcot; watch Sunset Blvd. come alive at Disney's Hollywood Studios; step through a glowing alien world of light-up trees at Disney's Animal Kingdom...

But there's more merriment to be had than just at Walt Disney World. Today, we wanted to compile a list of eight must-see seasonal celebrations outside of Walt Disney World that bring the joy, wonder, and light of the holiday season to life. As we embark on our cross-country tour, keep an eye out for giant trees, giant chocolate bars, and giant gingerbread men. What other local, festive theme park celebrations make your days merry and bright? Share your thoughts in the comments below...! 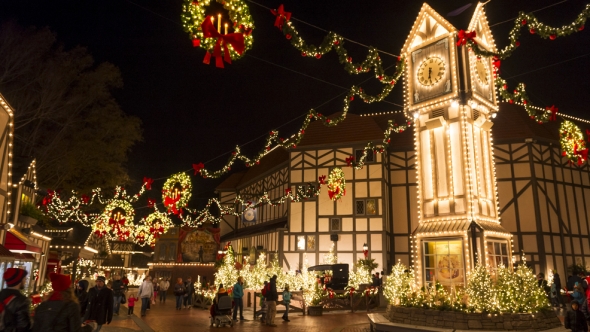 Busch Gardens in Williamsburg, Virginia has always been a park steeped in tradition. What else would you expect from "the world's most beautiful theme park" nearly 30 years running, located just a few miles from Colonial Williamsburg in the densely forested landscape of Virginia? Themed to "The Old Country," Busch Gardens is divided into hamlets dedicated to England, Scotland, Ireland, France, Italy, Canada, and Germany. Busch Gardens has always been the epitome of "quality over quantity," showcasing just a handful of roller coasters (each spectacular) with a real focus on authentic food, world-class entertainment, and sensational atmosphere. 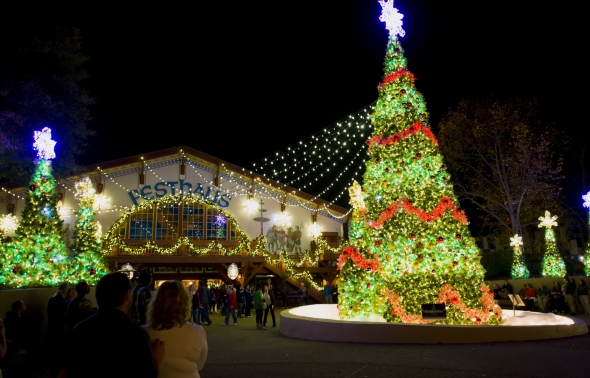 Busch Gardens' ChristmasTown celebration – begun a decade ago – was one of the first modern examples of a regional, seasonal park extended its year with a full-blown holiday event, and it's only grown in the years since. Today, the park's European lands are fully and completely decked out. Projection mapping turns Germany's Wilkommenhaus into a kinetic Christmas glockenspiel; gingerbread, cocoa, and candycanes overtake the park's stores and cafes; seasonal shows become the highlight; and cleverly, the park's Mäch Tower drop ride converts into the leisurely, sight-seeing Nacht Tower overlooking the park's 10 million lights. 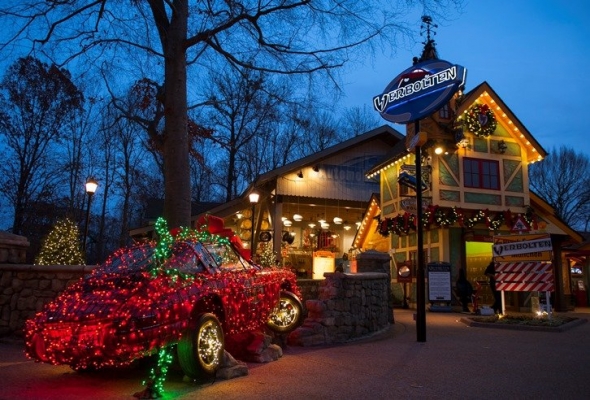 Holiday Highlight: Even during the chilly Virginian nights, the park does operate a few thrill rides like the Modern Marvel: Verbolten, the park's wooden coaster Invadr, and the new VR simulator in Ireland, Battle for Eire. Still, the must-see attraction has to be the park's ChristmasTown Express – a singalong, 1.5 mile steam train ride through the forest, over the Rhine River, and amidst 2 million lights. The park's other highlight during the season is the Mistletoe Marketplace of craftsmen and artisans built around the O' Tannenbaum tree outside of Das Festhaus.

Also see: Busch Gardens' sister park in Tampa, Florida – themed to Africa – features its own ChristmasTown event, though it's included as part of the year-round park's offerings rather than a separately-ticketed, extended-season event. 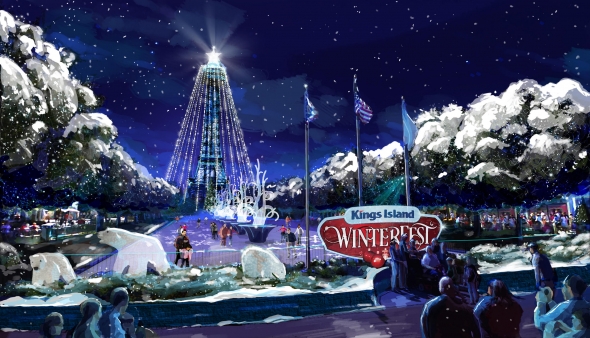 For a generation of Cincinnattians in the '80s, Winterfest was the place to be, transforming Kings Island into a winter-lovers paradise. The beloved local tradition, though, came to an end in the '90s under then-owner Paramount Parks. When Cedar Fair (the owners of Cedar Point, among many other amusement parks) purchased the Paramount Parks in 2006, they were made to strip cinematic ties leftover from the movie studio, and quickly began redefining Kings Island as a thrill park by supercharging its coaster count – a hallmark of Cedar Fair's parks. Given the blatant shift toward adrenaline junkies, fans assumed that Winterfest was truly gone for good. 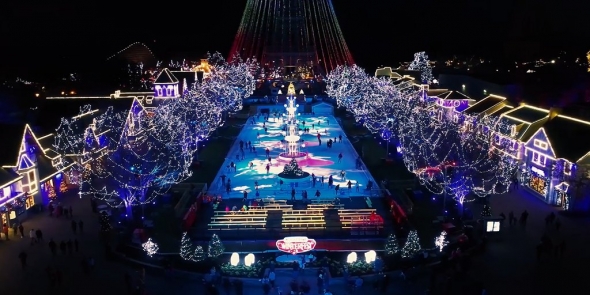 But voila! In 2017, WinterFest made its grand return to Kings Island, bringing over 5 million lights. To make up for the closed coasters in a park that's – at its core – a thrill park, Kings Island went big on nostalgia. Kings Island's Christmas event offers entertainment and a healthy spread of festive food (turkey dinners, roasted nuts, churros, and baked potatoes), and even a hot cocoa flavored (and colored) as a companion to the park's signature blue ice cream. 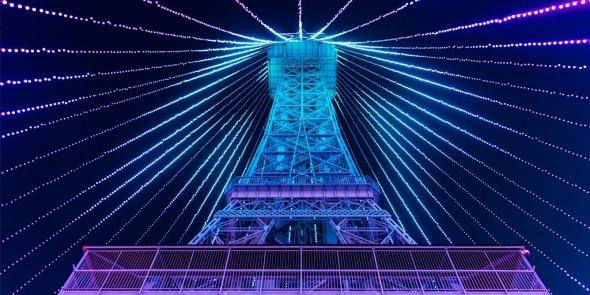 Holiday Highlight: While two of the park's coasters (the new Mystic Timbers and the indoor Flight of Fear) are running alongside the park's Planet Snoopy (reimagined as Charlie Brown's Christmas Town), the most iconic element of WinterFest must be the transformation of the park's central icon – a 315-foot tall, seafoam green replica of the Eiffel Tower – into one of the world's largest Christmas trees and the Royal Fountains at its base transformed into a truly astounding ice-skating rink.

Also see: Cedar Fair first prototyped the modern WinterFest at California's Great America and at Carowinds before its reintroduction at Kings Island. This year, the event spread to Richmond, Virginia's Kings Dominion, as well! 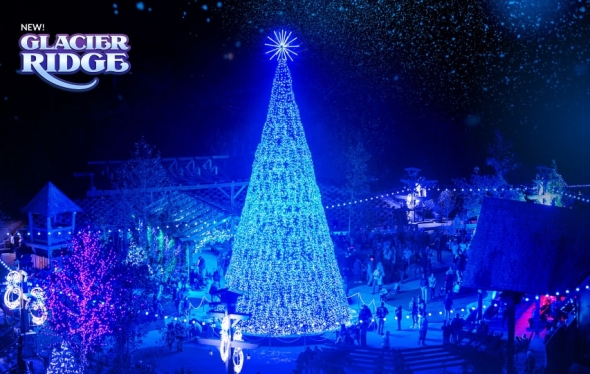 Set in the scenic Great Smoky Mountains of southeast Tennessee, Dollywood is a must-see theme park that serves as the tourism hub for Pigeon Forge and Gatlinburg. Though it's named for (and certainly celebrates) the living legend country singer Dolly Parton who was born and raised in the region, Dollywood is – at its heart – a celebration of the people, the stories, and the products of the Smokies. Dollywood and its namesake are beloved in the area for the way they intentionally hire tradespeople to keep regional crafts alive – like blacksmiths, candlemakers, and more. 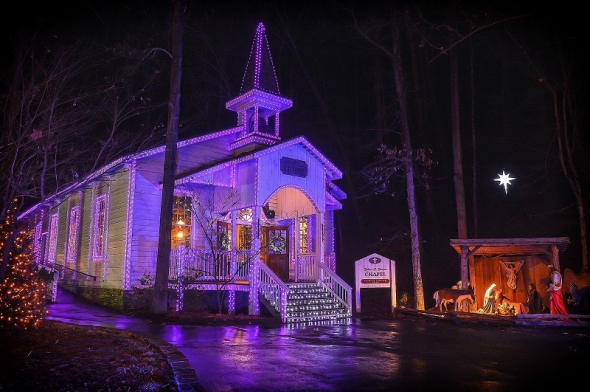 A rustic theme park with modern thrills, Dollywood's transition to wintertime is effortless, with the park's musical medleys shifting to Christmas tunes. Entertainment – already the heart of the park's offerings – abounds with singers on-hand to perform " Christmas in the Smokies," "It's a Wonderful Life," and the Parade of Many Colors. and its bakers working overtime to craft as much cinnamon bread as the state of Tennessee can eat.