The Rise and Fall of Disney's "Event" Parades 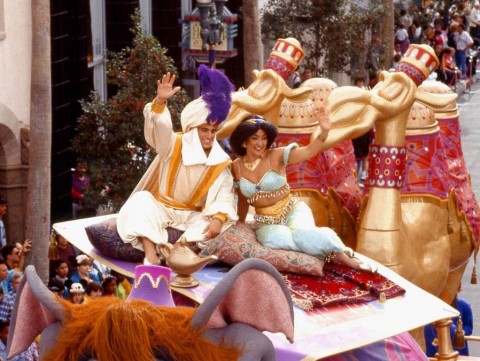 These days, just about every aspect of Disney Parks entertainment is shinier, fancier, and more innovative than ever before. When Paint the Night Parade made its auspicious debut during 24-Hour Day in May 2015, it boasted a full-LED set-up, over 1.5 million lights, and smartphone-synching technology—a spectacle that blew the park’s existing parade, Mickey’s Soundsational Parade, clean out of the water.

Of course, it’s not entirely fair to pit a daytime parade against the parks’ evening entertainment. Disney tends to save its best bells and whistles for Fantasmic!, nighttime parades like Paint the Night, and any number of overblown firework spectaculars. Back in 1997, however, things took a peculiar turn when a new daytime offering, the Hercules Victory Parade, began drawing more sizable crowds than the over-hyped evening parade, Light Magic.

According to the Los Angeles Times, guests came in droves to see the enormous moving mosaic of Zeus, a smoking Hades float (literally), and Hercules standing triumphant atop Mount Olympus. While the parade was only intended to boost sales for Hercules in the months following the film’s release, it quickly became a premier summer event as parkgoers pooh-poohed the $20-million-dollar replacement Disney had slated to replace the much-beloved Main Street Electrical Parade.

The Hercules Victory Parade was a prime example of a promotional parade; that is, a special, often limited-time event that was designed to create more interest around Disney’s latest animated features in the mid- to late-1990s. From Aladdin to Mulan, these parades recreated the best parts of the studio’s immensely popular Renaissance wave—and just as quickly vanished from the parade routes that bisected Disneyland and the Magic Kingdom.

Disney rolls out their first promotional parade: The Love Bug 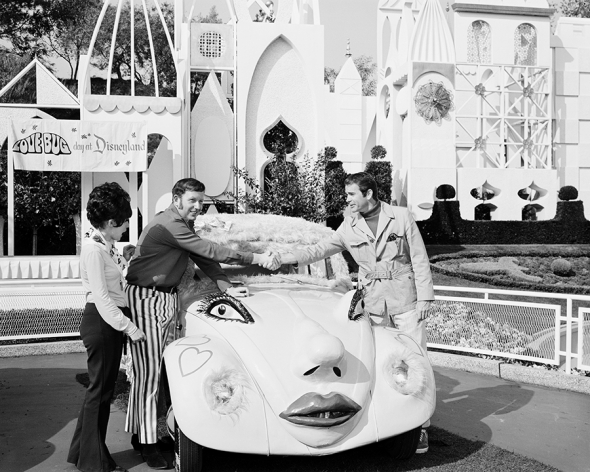 The very first promotional parade in Disney Parks history likely dates all the way back to 1969. Long before the likes of Beauty and the Beast and The Lion King became colossal money-makers for the studio, Herbie the anthropomorphic Volkswagen Beetle rolled down Main Street, U.S.A. to promote his debut on the silver screen. The procession was proceeded by a contest where Beetle owners decked out their cars in all manner of costumes and custom paint jobs in order to win their own Herbie replica.

In 1974, Herbie returned to Disneyland for his second procession. In an attempt to drive up box office numbers for the sequel Herbie Rides Again, the mischievous Love Bug scooted his way down Main Street yet again. He was also spotted during the Christmastime Fantasy on Parade, this time flanked by Chip and Dale in miniature Volkswagens, dancing chimney sweeps, the Three Caballeros, and an accordion player, among other characters and performers.

Promotional parades served a twofold purpose. While they were primarily designed to hype up Disney’s latest theatrical releases and inflate box office numbers, they also succeeded in attracting bigger crowds to the company’s theme parks. Creating brand-new parades may have been taking in-park marketing measures to the extreme, but consider this: It was Walt’s idea to name Disneyland’s iconic castle after a movie that, in July 1955, was still four whole years away from being released in theaters.

From promotional parades to pre-parades… and back again 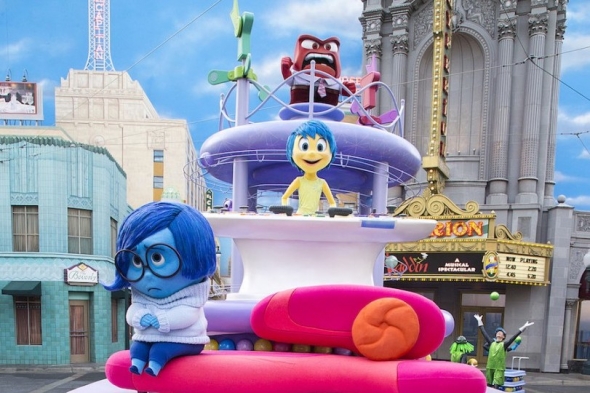 By the late 1970s, a new fad had caught on. The Love Bug Parades had certainly captured parkgoers’ interest (although winning a customized Beetle may have had more to do with that than anything else), but Disney wasn’t prepared to engineer a new parade with every release and re-release. Rather than developing more full-blown promotional parades, the company came up with pre-parades—that is, one or two floats they could tack on to existing processionals in order to pique guests’ curiosity.

Much of the Disney Parks’ past parade footage has been lost to time, memory, and the imperfect home video cataloging system, so it’s unclear exactly when these pre-parades originated. It might have been around 1977, when the Rescuers first landed in theaters, or with the 1978 or 1984 re-releases of Pinocchio. In 1988, a single Oliver and Company float served as the precursor to the Come to the Fair Parade, with the film’s classic tune, “Why Should I Worry?” belted to the top of Main Street, U.S.A. as Jenny, Oliver, Dodger, Tito, Francis, and Bernadette bopped along the street. That pre-parade inspired three others that coincided with The Little Mermaid’s release in 1989 and the re-releases of Peter Pan in 1989 and The Jungle Book in 1990.

Each pre-parade float was structured exactly the same, with a marquee advertising the name of the film above the characters’ heads as a familiar song played on the speakers. Occasionally, as with The Little Mermaid float, one or two fur characters would be sent out ahead of the float as well (just take a second and picture Flounder with feet). As Disney’s animated Renaissance period reached its zenith in the mid-1990s, however, the studio realized they needed to go even bigger. 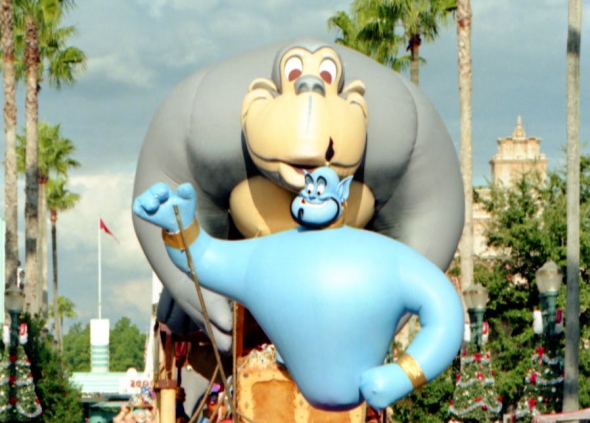 In 1989, The Little Mermaid heralded one of the most famous and successful periods in Walt Disney Studios history. The “Disney Renaissance,” as it would later be known, spanned 10 films from 1989 to 1999 that were responsible for reviving the popularity and commercial success of feature-length animation. Some of the studio’s most well-known work emerged during this era: The Little Mermaid, Beauty and the Beast, Aladdin, The Lion King, Pocahontas, The Hunchback of Notre Dame, Hercules, Mulan, and Tarzan included.

It soon became apparent that pre-parade floats weren’t going to cut it anymore. With rumors of an impending recession keeping the usual flock of stateside tourists at bay, the 1990s saw some truly harebrained promotional stunts, from frequent Disney Parks-themed episodes of popular sitcoms (that, in reality, were nothing more than half-hour long commercials for the parks themselves) to a Hercules takeover of the Electrical Parade in Times Square that required eight city blocks to temporarily shut down, lights and all. By the time Disney realized what a gold mine they were sitting on, they were ready to go all-in with their new animated hits. They ditched the simplistic pre-parade floats and started to think outside the box. Starting with 1992’s Aladdin, every animated feature formed the centerpiece of a brand-new promotional parade, the likes of which hadn’t been seen in 20-some years.

Guests who found themselves wandering Disneyland (or Disney’s Hollywood Studios) from the spring of 1993 through the summer of 1994 might have stumbled across Aladdin’s Royal Caravan Parade, orchestrated by a half-dozen versions of Genie—including a 32-foot inflatable one that easily reached the upper levels of the buildings lining Main Street, U.S.A. Spitting camels, dancing camels, harem dancers, lamp salesmen, a giant ape, and a man perched delicately above a bed of nails formed the bulk of the procession, which was brought up in the rear by Aladdin and Jasmine balanced atop the Magic Carpet. Rather than flying through the air, however, the carpet formed a makeshift saddle on the back of Abu-turned-elephant. Trailing Abu and his pals was Jafar, pushing a golden trash can from which Iago’s screech could be heard inside.

When Prince Ali packed his 95 white Persian monkeys and llamas galore and headed for an early retirement, the parks debuted their second promotional parade: The Lion King Celebration. The film itself had only been in theaters for two-and-a-half weeks before it transformed the Small World Mall into a veritable menagerie of elephants, rhinoceroses, giraffes, crocodiles, monkeys, leopards, and zebras. While the most impressive float by far featured a miniaturized Pride Rock, from which Simba and Nala surveyed their new (human) subjects, there was much more to take in: like the 89 cast members that worked as puppeteers, musicians, acrobatic pole dancers, and stilt walkers, not to mention the first Audio-Animatronics and Puppetronics that had ever been incorporated into a Disney Parks parade. Thanks to its elaborate costumes, technology-enhanced floats, and sheer showmanship, the Lion King Celebration Parade surpassed its initial goal of promoting the film and quickly became a beloved staple of the parks in its own right. It lasted three years before it was eventually phased out in June 1997. 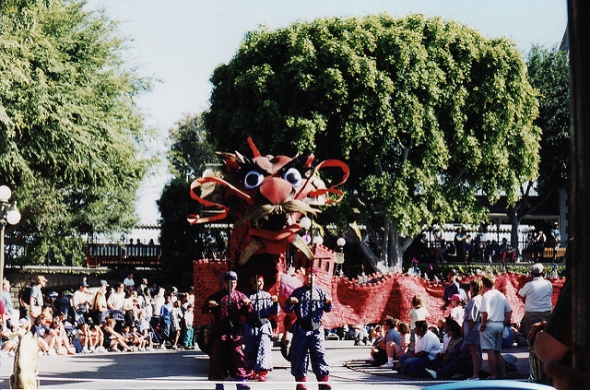 There was no replacing the Lion King Celebration Parade, though Disney tried their hardest to come up with another crowd-pleaser. Over the next three years, they continued to draw on their new releases for inspiration, which resulted in the Hunchback of Notre Dame Topsy-Turvy Cavalcade, a two-float processional that featured the likes of Esmeralda, Clopin, Frollo, Phoebus, and Quasimodo, and helped promote another Hunchback-themed show in Frontierland, and the slightly more popular Hercules Victory Parade, which incorporated smoke effects, a puppet-mobilized Pegasus, a plethora of gods and goddesses, and the film’s titular hero.

The last official promotional parade made its debut in June 1998. As with almost all of their prior movie tie-in parades, Disney didn’t wait to gauge the audience’s reaction to Mulan before planning an extravagant celebration for the parks. In fact, a preview of the Mulan Parade was rolled out in Disneyland a full five days before it landed on the silver screen. Like the Lion King Celebration Parade that had made its mark in Anaheim four years earlier, no expense was spared here, either. The parade snaked around Town Square with twirling pagodas, a hybrid dragon-Great Wall replica, acrobats, plate spinners, Mushu and the Fa family ancestors, a larger-than-life Shan Yu strapped to a skyrocket, and an immense gold and red float featuring Mulan, Li Shang, and Fa Zhou. While Disneyland’s iteration of the Mulan Parade was discontinued in May 1999 to make way for the Parade of the Stars, the version at Disney’s Hollywood Studios remained an integral part of the park’s entertainment schedule for nearly three years.