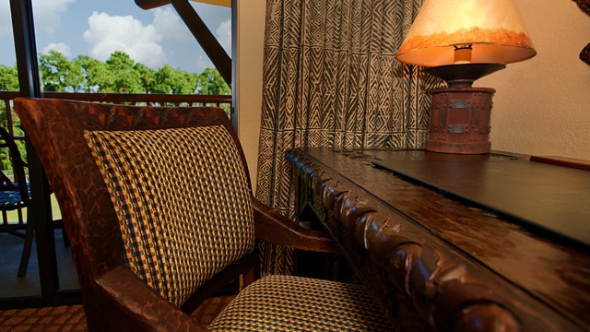 Given that the original vision of Walt Disney was to make his theme part tourists feel transported to a faraway land, the Royal Asante Presidential Suite embodies the culmination of his dreams.

The 2,115 square foot space is less a hotel room and more an oasis that will make you feel like Mufasa, the king of all that you survey. Animal Kingdom’s twin hotels both feature the artistry of several foreign lands. This suite augments the look and style of the park by featuring custom artistry befitting African culture. There are also wall paintings that pay homage to the citizens of the various countries on this continent.

Every little touch in the Royal Asante Presidential Suite reinforces this goal. There are water basins the likes of which you won’t see elsewhere in North America. The living room seating is circular in design to promote communal conversation rather than situate everyone facing an HDTV. And the magnificent ceiling is in the style of a hut roof, adding to the sensation that you’re living not in a premium resort but rather in the birthplace of civilization. Plus, you’ll have one of the best views of the Animal Kingdom Lodge’s other tenants, the animals, from your room.

The best way I can describe this room is as the suite Walt Disney himself would have built to honor Nelson Mandela for a lifetime of public service. It’s truly fit for a king or, more accurately, a president. You can enjoy all the authentic elements of the suite here. For those who want to stay in this suite – and that should be everyone – you’ll pay $2,300 - $2,800 per night. 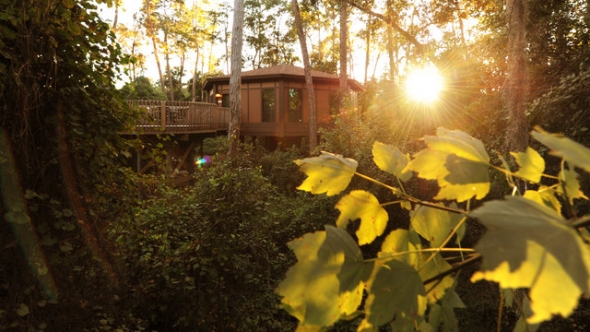 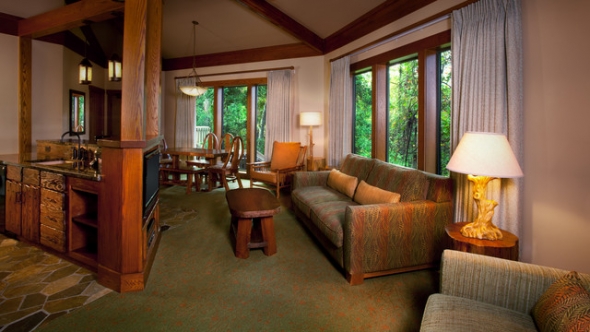 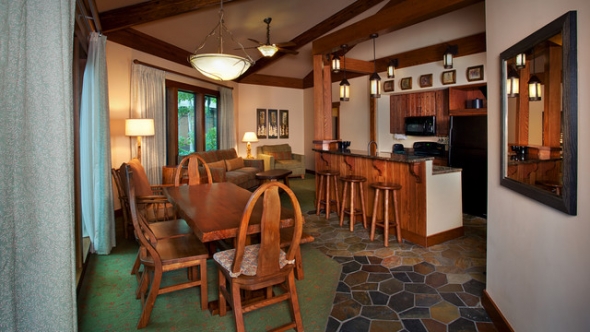 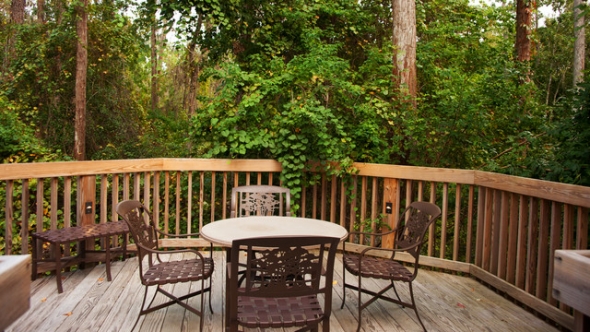 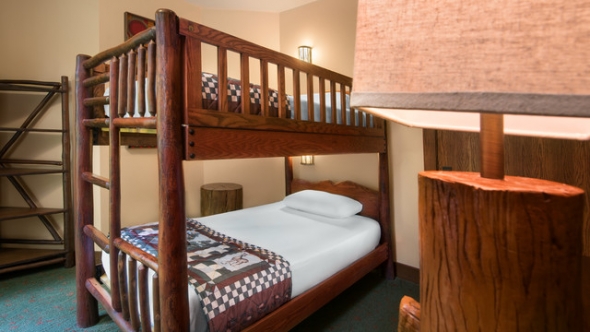 One of the quirkiest for a Walt Disney World suite resides at their property closest to Downtown Disney. The Treehouse Villas stand 10 feet off the ground in an immaculately gardened forest area at Saratoga Springs. They’re also three-bedroom suites, something of a rarity for Disney rooms. At 1,074 square feet, the space is a bit small for a three-bedroom facility.

The sublime design makes the situation tenable, though. The Treehouse Villas are octagonal in shape, so they use space better than your average home. It also makes them look like manufactured homes on stilts, which they kind of are, only the nicest ones you could ever imagine.

When you arrive at the Treehouse Villa, you’ll ascend a set of wooded stairs. Once inside, the first thing you’ll see is a woodsy living room area to your left and kitchen right in front of you. To the right is the third bedroom featuring bunk beds where you can give your children a memorable sleeping arrangement. Alternately, you can punish the group of adults you don’t like as much by forcing them to sleep in the kiddie room.

Just behind the kitchen is a pair of nearly symmetrical bedrooms, one of the primary benefits of an octagonal design. All the four quadrants of the villa divide evenly. All of the rooms feature spectacular woodsy backdrops thanks to the gigantic windows. If you stay here, your Walt Disney World adventure will double as a glamping trip.

The best aspect of the Treehouse Villa is that it’s one of the cheapest suites listed here at $850 a night most of the time. If you’re a Disney Vacation Club member, you can stay at a resort that looks this amazing for as few as 39 points a night. 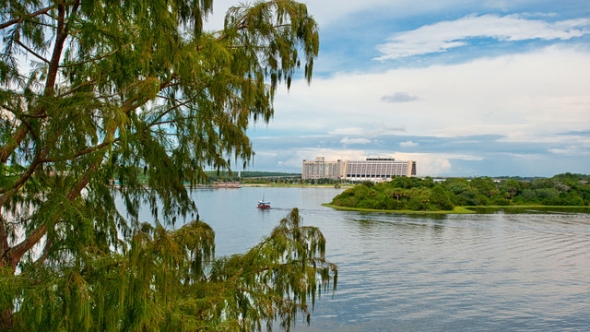 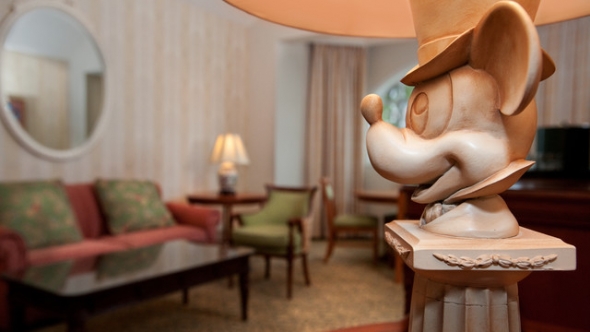 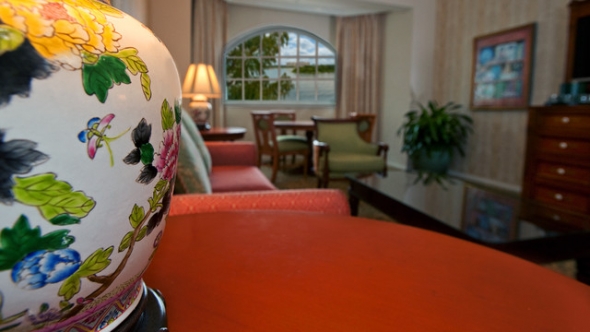 Do you love The Royals? In 1993, the most famous princess of the modern era snuck her two sons, William and Harry, out of the Orlando International Airport. Their destination was Walt Disney World, and Disney officials handled all the details in enabling a pair of young princes to feel like regular kids at the Most Magical Place on Earth, at least for a day. Their mother, whom you know as Princess Diana, engaged in some subterfuge to sneak her boys to their hotel. It was the Grand Floridian, and the room they chose for their stay was this one, the most deluxe option at Walt Disney World’s most refined property. You can read details of the trip here.

The point is that if it’s good enough for the British royal family, it should more than suit your needs. With 2,220 square feet and a pair of bedrooms, it’s one of the most spacious options at any of Walt Disney World’s official resorts. The tasteful, sophistical interior emphasizes southern charm and old world chic. There are high-end finishes everywhere, and the entire suite feels like a Master’s Class in Interior Design. Simply by watching this video, you may get some decorating ideas for your own home.

While the interior appointments are amazing, the showstopper is outside. That’s where five dormer-style balconies enable an exceptional view of several high points of the surrounding area. Depending on where you stand, you can see Space Mountain, the Contemporary Resort, the Polynesian Resort, Seven Seas Lagoon, and Cinderella’s Castle. On a clear day, you can even enjoy Spaceship Earth off in the distance.

Given the inconsistent demand for this suite, its prices fluctuate a great deal. You can occasionally stay here for as little as $2,200, but $2,600 is standard. During peak periods on the calendar, it costs $3,300 a night. Then again, how often can you say that you stayed in the same room as Princess Diana?