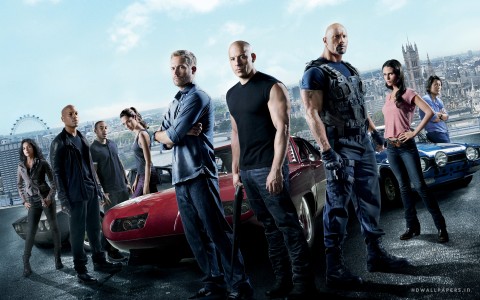 When Comcast first agreed to purchase NBCUniversal from General Electric in December 2009, it wanted absolutely nothing to do with theme parks, even going so far, industry scuttlebutt had it, to contemplate the possibility of spinning Universal Parks and Resorts off into an entirely separate company.

The grand opening of The Wizarding World of Harry Potter – Hogsmeade in June 2010 changed all that.  Suddenly, what was a slowly dying (and thoroughly embarrassing) division became the golden child of NBCUniversal; Hogsmeade made back its $260 million budget in an astounding four months.  The project was a game changer, and Comcast immediately wanted in in a major way.

In September 2013, after it had finally obtained full ownership of Universal, the company made good on its intentions:  it announced in an investors’ call that it was going to spend some $500 million each and every year for the immediate future on all three of its American parks (at both Universal Studios Hollywood and Universal Orlando Resort), getting them up to snuff to take the venerable Walt Disney World head-on.  That translates into at least one new attraction opening up each year for most of the decade – a thoroughly unprecedented feat. 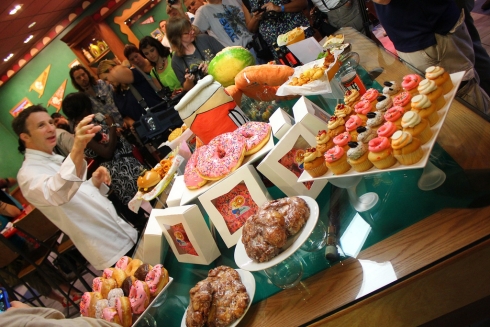 While this resulted in easily-leaked developments in both 2013 (Transformers: The Ride – 3D and The Simpsons’ Springfield) and 2014 (The Wizarding World of Harry Potter – Diagon Alley, Cabana Bay Beach Resort, and the CityWalk expansion), 2015 has long looked decidedly barren, partially due to the fact that Universal, as is its wont, has been even more tight-lipped than ever before, even internally.

This situation is slowly starting to change, and in a major way, thanks to brand-new construction walls going up (yet again) in Universal Studios Florida this past week, substantiating a rumor that’s been whispered for over the past year.  Indeed, with work finally starting to pick up, it’s time to take stock of just what the new year will bring for the ever-changing resort.

Royal Pacific Resort is Universal Orlando’s third on-site hotel, the final one to be a deluxe property (meaning it both provides complimentary water taxi transportation to the parks and offers free unlimited Express Passes to every guest), and, arguably, the most popular overnight destination at the resort, although the recent addition of the value Cabana Bay is certainly giving it a run for its money.

One of the most popular demographics for the hotel, it turns out, is conventioneers, who are just as eager for a stay in the South Pacific as they are for getting free front-of-line passes (Royal Pacific is the largest and most inexpensive of the three deluxe resorts).  And it looks like Universal is keen to attract more and more of them, as the only officially confirmed development for this year happens to be an expansion (the first for a Universal-owned venue) of the hotel’s meeting space:  the already sizable 85,000 square feet of convention rooms will be getting an additional 56,330 square feet tacked on sometime this fall. 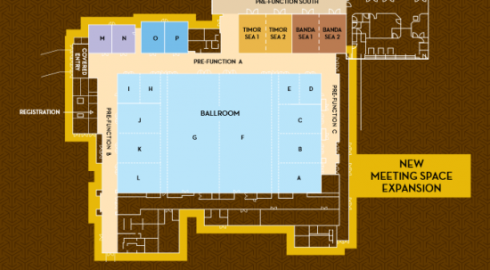 The move may not be particularly exciting for the average guest, but it is nonetheless an important – and telling – one.  With Cabana Bay firmly going after the budget-conscious tourist, maximizing Royal Pacific’s appeal to the convention crowd is the next logical step in filling Universal Orlando’s 4,200 hotel rooms – and, thus, ensuring more foot traffic and cash flow to subsidize the next wave of rides, shows, and restaurants.  (The fact that this new meeting area will connect with the upcoming fifth hotel, Sapphire Falls Resort, is just icing on the convention cake.)