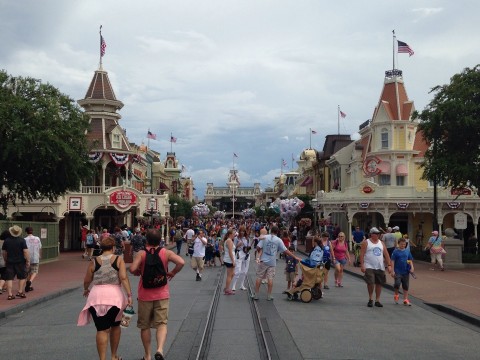 Main Street USA is one of the most iconic sights in all of Walt Disney World. The quaint street takes you back to turn of the century America, when towns were small and neighbors friendly. Despite the period-appropriate accents and careful theming, however, this street is unlike any historic Main Street simply by way of the centerpiece at the end. With Cinderella Castle straight ahead and charming shops to either side, this main drag offers an experience unlike any other.

Though it’s easy to get lost in the excitement, Main Street USA is filled with little extras you won’t want to miss.

1. The sounds of vocal lessons 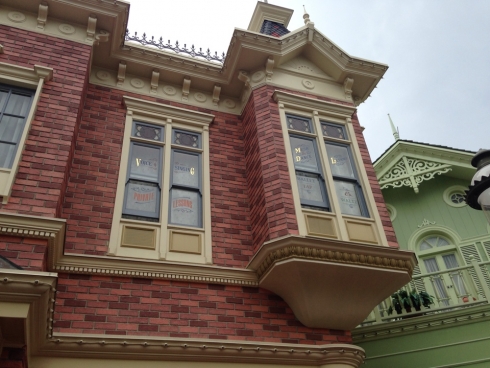 Main Street WindowListen for voice lessons beneath this window.

Though it can be difficult to hear during busy seasons, Main Street has a great hidden gem in its audio. As you’re heading toward the castle, look for Center Street on your right. This isn’t really a full street, as it just dead ends without taking you anywhere, but it gives you a chance to step away from the bustle and strain your ears for this special feature. Look up and you’ll see windows that advertise private voice and singing lessons. Stop and listen here and you’ll hear that some of these lessons are currently taking place.

2. Famous names in the windows 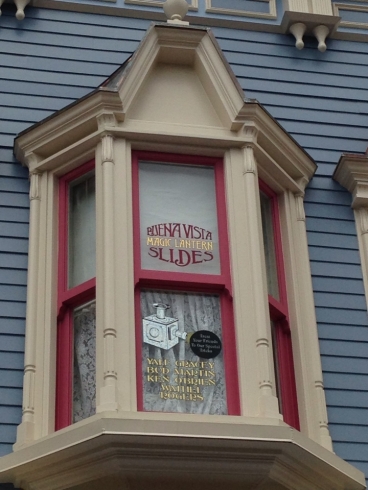 Avid Disney fans know all about the windows on Main Street, but they’re still worth a look. The names on these windows are more than just creative additions to make Main Street seem authentic. They’re the names of some of the most talented people to grace Disney property.

The window for Buena Vista Magic Lantern Slides alone boasts the names of Yale Gracey, Bud Martin, Ken O’Brien, and Wathel Rogers. If you’ve ever enjoyed the special effects of the Haunted Mansion, you have Gracey and Martin to thank. Ken O’Brien was an animator who worked on Pecos Bill, Donald’s Diary, and Winnie the Pooh and a Day for Eeyore. Wathel Rogers worked on audio-animatronics for the Enchanted Tiki Room and Hall of Presidents.

Though it’s not easy to get the whole story in a glance, many windows have a lot to say about the people named on them. The window for former president and CEO Frank G. Wells features “Seven Summits Expeditions” as a small nod to his mountain climbing hobby. This window is also higher than the rest, representing a mountain summit in its prominent location.

If you slow down and look, you’ll find more than a dozen prominent names. As a tribute to the man whose dream is behind it all, Main Street begins and ends with windows for Walt Disney.

3.  Windows that tell a story 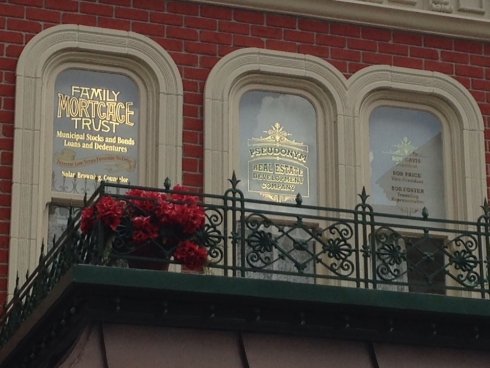 In addition to the important names on the Main Street windows, you’ll also find some notable nods to the story behind how this park came to be. Walt Disney knew that the price of land in Florida would skyrocket once the public caught on to his plan to build his next big theme park there, so he instead purchased the land under several pseudonyms. Two windows offer a nod to this bit of history – one reads “M.T. Lott Real Estate Investments” and the other “Pseudonym Real Estate Development Company.” 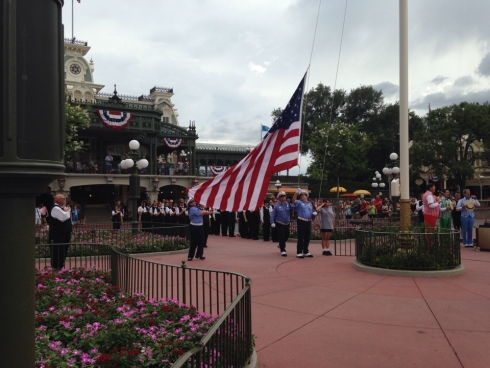 Every day at 5:00, Main Street hosts a flag retreat ceremony. The Dapper Dans quartet sings “God Bless America” and the Main Street Philharmonic band plays “The Star Spangled Banner.” Each day a special veteran is chosen to participate in the ceremony. If you’re a veteran and interested in this opportunity, inquire at Guest Relations as early in the day as you can. The entire ceremony lasts about 15 minutes and often brings viewers to tears. If you’d like to catch this little known event, just make sure you’re in the area around the flag pole at 5 in the afternoon.

You forgot about the old phone in the hat store called The Chapeau. Pick it up and you can here several conversation as if you are listening through an old fashioned switchboard!

Where exactly is the statue of Roy? Would love to see it next time. Walt adored his big brother.

It's near the flagpole when you first walk on to Main St.

It is in the area of the flag pole near the Main Street Station. They move it to the side in front of City Hall when they put up the Christmas tree.