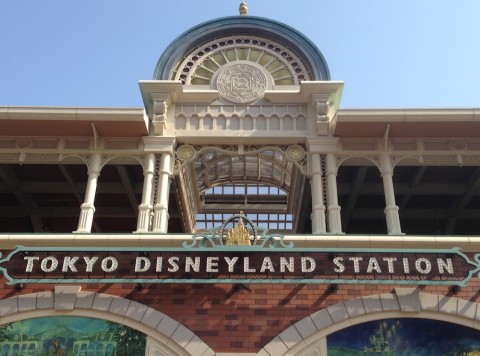 It all started with a mouse. Fast forward a bit, and it began with Disneyland Park in California in 1955, which redesigned the public’s perception of what amusement parks could be. Fully themed, self-contained lands radiating out from a central hub proved easy to navigate, fun to explore, and a great alternative to the long, carnival-style midways popular in the era.

A few decades later in 1971, the blueprint expanded at the Magic Kingdom, the beginning of Walt Disney World in Florida.

On April 15, 1983, the concept proved itself as never before when Tokyo Disneyland opened as the first international Disney Park. Borrowing concepts from both Disneyland-style parks that came before it as well as Epcot, its sibling in-utero (both were designed and planned at the same time by a core groups of Imagineers), Tokyo Disneyland was a wild success. At once, the stories, characters, and settings of Disney films and theme parks became a staple of Japanese pop culture. Visitors poured in, straining the infamously crowded resort to its limits, even as expansion pressed on.

But that doesn’t mean Tokyo Disney Resort is inaccessible to foreigners, or that it’s too scary or difficult to reach. In this special five-part report, we’ll discuss the resort’s history and how to plan a vacation to Tokyo, tour Tokyo Disneyland, then Tokyo DisneySea to answer the question "Is Tokyo DisneySea the best theme park on Earth?" Finally, we'll reflect on the unique experience that these two incredible parks offer.

So how do you plan a Tokyo Disney Resort vacation? There’s nowhere to begin but the beginning.

Tokyo Disney Resort is located on reclaimed land on Tokyo Bay just outside of Tokyo proper. It can be accessed by many means of transportation, simply standardized in Japan's system.

Tokyo Disney Resort is located in Uraysu, Chiba, Japan, roughly 15 minutes outside of Tokyo proper. The entire resort is contained on approximately 500 acres of reclaimed land directly on Tokyo Bay, an inlet of the Pacific Ocean. Arriving at the resort requires use of the East Japan Rail Company (JR), an extensive network of trains that intersect around and through Tokyo. JR offers countless discounts and special passes for foreign visitors, and we were able to take advantage of a pass good on all JR Rail lines for 3-days that costs only US$80.00. This pass allows transportation all across the massive, sprawling Tokyo prefecture and even includes use of select bullet train routes to distant cities.

All of Tokyo's extensive train network is standardized in the same style with English signage prevalent.

For the purposes of arriving at Tokyo Disney Resort, it’s just a matter of arriving at Narita International Airport (code NRT) and taking a bus to the Tokyo Disney Resort area, about an hour away for a cost of $37.00 round trip. If you arrive late in the evening (which may happen due to Japan’s pretty wild time change no matter where you’re departing from), you simply utilize the train system by taking a Narita Airport Express to Tokyo Station, and transferring to a Keiyo Line to disembark at Maihama station.

All of Tokyo’s rail systems are united and standardized together with signs, maps, and narrations presented in both Japanese and English. Of course, this is also a good time to mention the necessity that Disney not be your only stop on a trip to Japan, nor even the majority of it. Japan is an incredible country connected by a transportation network that's easy to understand and massively efficient. To ignore the thousands of day trips possible in Tokyo alone in favor of completely immersing yourself in a "Western" experience at a Disney Park is to deprive yourself of an unforgettable experience. Japan should be your goal - Disney can represent an interest along the way.

Three Disney Hotels are located outside the parks, and a number of Official Hotels are on the outskirts of the peninsula, all accessed only via the Disney Resort Line.

There are countless hotels in and throughout Tokyo that are all accessible to English-speakers (though I did notice throughout that if your first language were something else, like German or French, you wouldn’t find much help). Most rooms are traditional Japanese rooms, meaning that they’re very small, tight, and compact.

The Disneyland Hotel is located across from the entrance of Tokyo Disneyland. It's designed in Victorian style with royal blue towers and scale golden domes.

The resort also has six “Official Hotels” which might be more properly labeled “partner hotels,” which share the peninsula with the resort and have their own dedicated monorail stop. These include the Hilton Tokyo Bay, Sheraton Grande Tokyo Bay Hotel, and other resort style hotels whose names will sound familiar to travelers. Of course, these more reputable hotels provide comfort that at least someone will speak English, though most people working in hotels were at least able to communicate. Believe it or not, they can tell just by a glance whether or not to assume you speak Japanese. These larger hotels are also frequent locations for conventions and traveling families, so English-speakers are tremendously welcome (which, by the way, they are in the rest of the country as well). 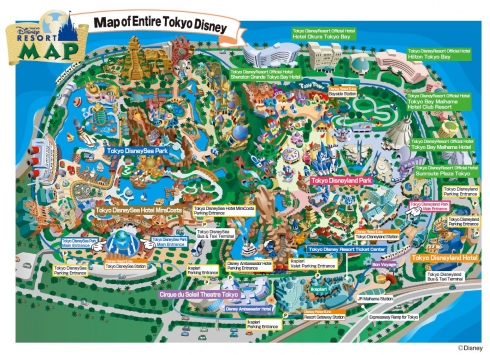 This map displays the layout of the resort's two parks, their respective entrances, the four stops of the Disney Resort Line, and Disney & Official Hotels. (Click for larger) © Disney

Tokyo Disney Resort is roughly comparable to Disneyland in California in that it contains two theme parks, three hotels, and a downtown area. Tokyo’s resort, however, is not so neatly navigable. Tokyo Disneyland and DisneySea are snuggled together, but their entrances do not face each other. Besides walking through massive parking lots, the only way around the resort is via monorail, and supposedly due to Japanese requirements that transportation systems have timetables and fees, you must pay to use it.

The monorail (here referred to as “The Disney Resort Line” and integrated into the Japanese rail system as just another train route) has four stops – first at “Resort Gateway” (where you can connect to the JR Line or Ikspiari), “Tokyo Disneyland Station,” “Bayside Station” (home to the six official hotels), and “DisneySea Station.” Because it’s the only way to access the parks, monorails are speedy and frequent.

Pricing at Tokyo Disney Resort is - of course - subject to the ebb and flow of the conversion rate between the Japanese yen (¥) and one's original currency. During my trip, we were lucky enough to find that the value of the yen had fallen to an unusual low such that the conversion rate was almost exactly US$1 = ¥100 (whereas for years and years, US$1 had consistantly equaled around ¥86). This, of course, made conversion extremely simple. Even if a breakfast bun being ¥300 might initial cause a gasp, this really was almost exactly $3. And in fact, much of the food at the resort was very reasonably priced, owing perhaps to the smaller portions served in Japan, but I certainly felt I'd gotten more than my money's worth each time I ate. 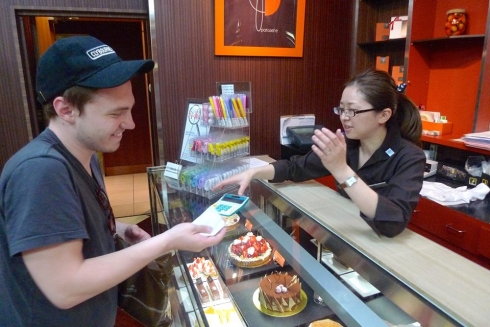 Most transactions happen with coins. Almost all Japanese registers have a calculator or display to show the total, and don't be surprised if it's in the thousands.

While most food service locations and gift shops inside Disney accept credit and debit cards, most of the day-to-day purchases of the country are in cash. And then, much of Japanese currency is in coins. Because the denominations are so large, you won't find a bill until ¥1000 ($10), so a wallet that can safely store coins is a must. As well, ATMs are located throughout the resort, but only a few accept international cards (we frequented one in Ikspiari). Even then, consult with your bank and be aware of charges for using cards internationally. Many banks charge a flat fee for withdrawing from an ATM that they don't own, and then charge a percentage fee on top of that for international withdrawls or transactions. In the US, a Charles Schwab checking account charges no international fees whatsoever, and refunds ATM fees anywhere in the world. 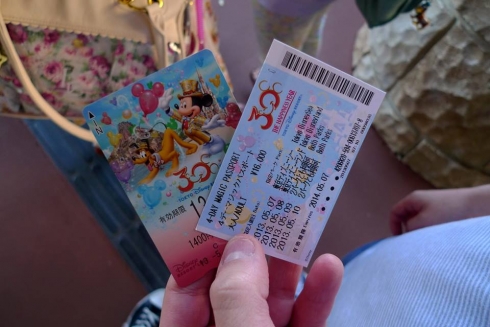 Tickets to Tokyo Disney Resort Parks assign which parks you may visit on each day until the third.

Tickets to the Disney Parks can be purchased at the gates, at Disney Stores in Tokyo, or at Disney and Official hotels. They can also be purchased beforehand online but must be picked up at the Tokyo Disney Resort Welcome Center in Ikspiari. Ticket pricing is unbelievably reasonable compared to the other international parks. Tickets are available in 1, 2, 3, and 4 day options (and the parks also sell Starlight Admission tickets for evening visits). The 4-day ticket cost us US$160, which should shock and amaze anyone who visits Disney Parks regularly. The catch is that on the first and second day of use, you must select Disneyland one day, and DisneySea the other. If you purchase a 3 or 4-day ticket, you may parkhop between the two beginning on day three. This is just another way the resort tries to control the massive crowds that visit every day.

So now, we’re there. We’re checked in. And of course, that 15-hour plane ride couldn’t slow us down. Let’s head into the parks to see what all the fuss is about. Click here to continue to Part II: Tokyo Disneyland.