Not in Kansas any more: Previewing "Oz the Great and Powerful" at Disney California Adventure 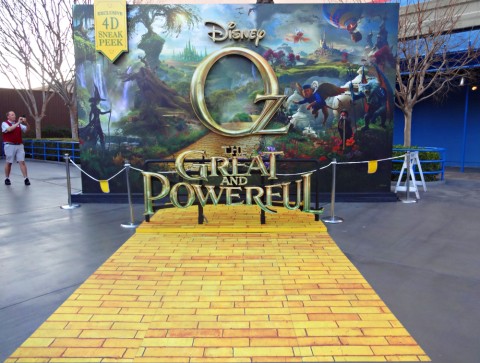 I remember sitting in a movie theater waiting for the last installment of the Twilight saga with my best friend of 17 years. We were chatting and giggling like the high school girls that we were when we first met all those year before. It was nice to catch up and have a frivolous night with a silly movie.

We didn't expect to take much of anything seriously that night, but something stopped us in our gossiping tracks and rendered us absolutely speechless. It was the movie trailer for Oz the Great and Powerful.

We watched with wide eyes as the screen changed from black and white to vibrant color. The trailer promised magic and mystery, a dream cast and fantastic acting. The cherry on top of this Kansas-centric sundae was the ultimate stamp of approval: Disney Studios.

You may remember from this article here on Theme Park Tourist last year that Disney owns the rights to 12 of L. Frank Baum’s classic Oz novels and Disneyland was almost the home to an attraction called “Rainbow Road to Oz”. Walt Disney had a great affinity for Baum’s magical land and always meant to build an Oz empire under the umbrella of his Disney empire. It warms my heart to know that Walt’s dream is finally coming true with the making of Oz the Great and Powerful. 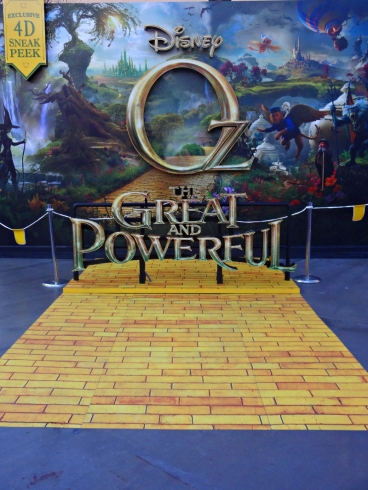 Disney California Adventure is hosting the preview until the end of March.

If you’re reading this article, I have to believe that you’re with me in loving all things Disney. If this is true, you must know exactly how thrilled I was to learn that Disney California Adventure started offering 4D extended sneak peeks of Oz the Great and Powerful as of last weekend and running through March 31st.

The feeling of awe that I had when I saw the trailer for the first time washed over me once again. With the tease of 4D I knew that the experience would be interactive to some extent and I couldn’t help but rush to the park right away! 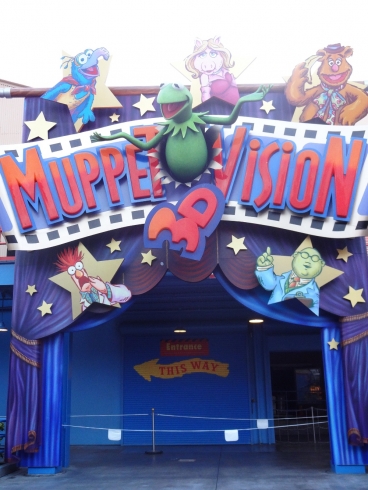 The special extended sneak peek was held at the Muppet*Vision 3D Theater. Guests felt as though they were at a Hollywood premier as they posed with a huge Oz the Great and Powerful backdrop and stood in line for the special 4D experience. I was lucky enough to be first in line where I noticed that we were being held back with a red velvet rope. When the theater was ready for us, we were each handed a pair of purple 3D glasses and made our way to our seats. 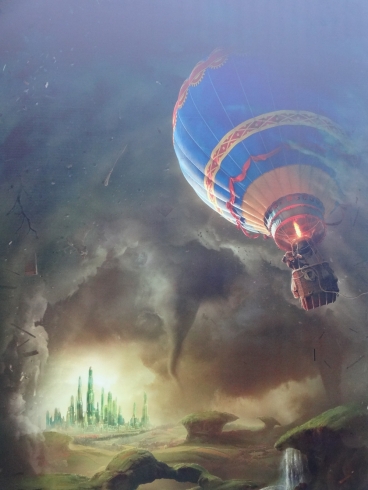 An on-site poster for the upcoming movie.

The ornate theater may have boasted fabulous Muppet architecture, but everyone was abuzz with whispers of Oz that afternoon. With the 3D title screen taunting us as we waited for the theater to fill up, I busied myself by snapping a quick photo through the 3D glasses. Finally, the lights dimmed and the experience began… 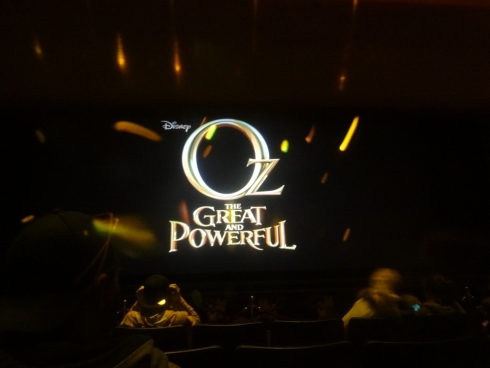 The view through my 3D glasses.

Our hero wanted to be a great man, and so he set off on a great adventure. Great adventures come with great obstacles, which we soon felt throughout the theater as we watched a tornado pick up his hot air balloon and a gust of wind hit us. Shivers. We were practically in that balloon with him!

I used to loathe 3D movies. They promised something that they never delivered, which was the ability to feel as though you were literally in the movie alongside the characters. Not only was the effect less than extraordinary, but the flimsy glasses came with a side order of headache. My opinion of 3D drastically changed when I saw the new Alice in Wonderland movie in an IMAX theater a few years ago. It was a vast change to the 3D of my childhood and I decided to forgive it once and for all. I had no idea that 3D could improve anymore than it already had, yet the extended sneak peek of Oz the Great and Powerful knocked my socks off! I gasped as a top hat practically hit me in the face. I felt a smile set in as iridescent bubbles surrounded me. I jumped when flying monkeys viciously snapped my way. I was on an adventure – my racing pulse told me so!

The entire theater was on the edge of their seats and a collective moan rang out when the sneak peek concluded. It was such an extended trailer that we all seemed to forget that we weren’t watching the full movie. As we returned our glasses and grabbed a complimentary bottle of bubbles, we all started talking about how cool the effects were and how we couldn’t wait for the March 8, 2013 release date. This movie is going to be epic! 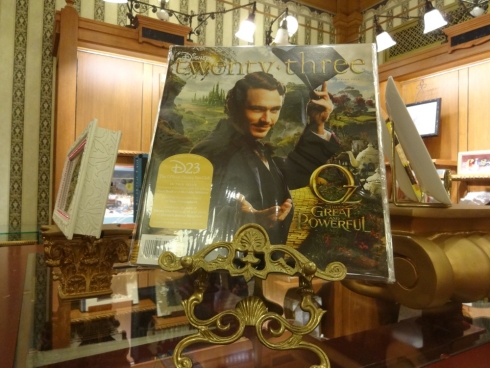 If you choose to see this extended sneak peek in person, you’ll notice that the entire resort has Oz fever! Take a moment to pose with the movie poster on the back side of one of the parks’ ticket booths. Then hop on over to Disneyland’s Main Street to catch a glimpse of the D23 Oz display.

Let us know how excited you are to see Oz the Great and Powerful in the comments below!