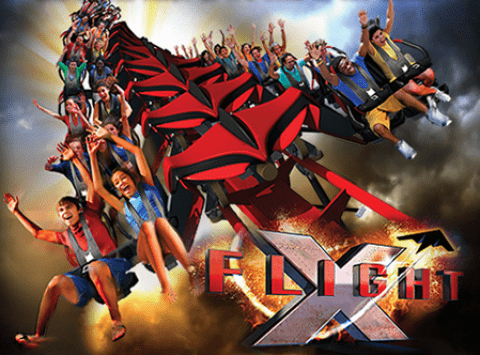 There’s no question that 2012 will be a season of monumental change and innovation in the amusement park world, and no manufacturer is poised to enter this transitional season with such impact as Bolliger & Mabillard of Switzerland. After all, who would have imagined that the company – so known for its reliability and consistency – would finally break the 300-foot barrier with Leviathan at Canada’s Wonderland? And truthfully, who would’ve expected Six Flags Great America’s 21-year-old, B&M stand-up coaster to be re-built in Maryland?

Perhaps most surprising of all, though, is the construction of not one, but three new B&M Wing Rider coasters across the planet, all due to open in the coming year. All three new Wing Riders will follow in the footsteps of last year’s prototype, Raptor, which opened at Gardaland in April 2011, featuring sweeping turns, aerobatic maneuvers, and themes that can’t help but focus on the soaring, freeing sensation of flight.

Of 2012’s additions, The Swarm (set to open at Thorpe Park) will carry a post-apocalyptic, war-torn civilization theme wherein humans battle a flying swarm of predators while Wild Eagle (the more optimistic, Dollywood version of the ride system), will replace The Swarm’s shattered urban backdrops with majestic mountaintop forests.

And at Six Flags Great America near Chicago, Illinois, a happy medium between the two is being born.

The Origin of Flight 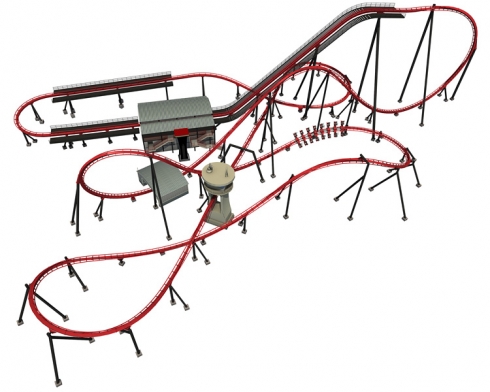 In 2001, Six Flags opened the chain’s first foray into the flying coaster with their X-Flight, a neon green and black Vekoma Flying Dutchman at then-megapark Six Flags Worlds of Adventure in Cleveland. The ride, surrounded by thematic cranes, yellow-and-black warning stripes, and runways, was themed to a government testing facility in which a new system of human flight was being tested. Guests were all too willing to be guinea pigs.

The troubled, too-much-too-soon park was sold to Cedar Fair in 2004, and the ride was removed soon after. Today, that ride operates at Kings Island under the name Firehawk, leaving the Six Flags chain short one experimental flight coaster. That is about to change.

The idea of a top-secret flight apparatus is being reborn in 2012, and it’s even reviving the former name. But this X-Flight will be different.

X-Flight will, of course, use the new Wing Rider design to simulate human flight in a whole new way. With nothing above you but sky and nothing below you but earth, this twisting coaster will invoke a new sense of cloud-bound thrill. The unique Wing Rider trains have a pair of seats affixed to either side of the ride carriage, each suspended off the side of the track. The result is an unsettling style of flight that truly is original. 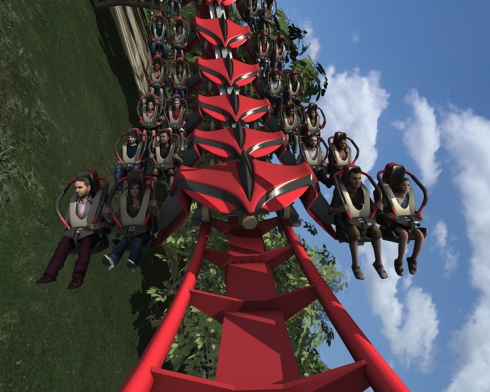 The experience is perhaps most comparable to riding in the outer seats of B&M’s super-wide Dive Machines (with rows that can reach ten seats wide), but even that can’t capture the sensation of zooming along one of these new Wing coasters. The spread seating means that each twist and turn will translate differently for riders on either side of the train, but also that every movement will feel massive and prolonged, with dramatic, wide-radius inversions sure to produce incredible sensations of weightlessness and hang time.

And while the layout of X-Flight is nothing too extreme in terms of sheer height and speed statistics, it does contain five of those prolonged, gliding inversions, 3,000 feet of blood red track, and two of the Wing Rider’s near-virally famous close encounters.

How X-Flight is Different 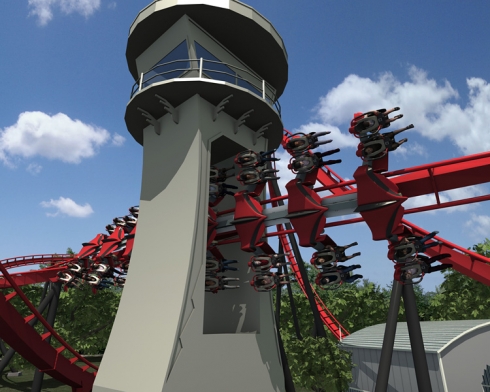 One of X-Flight's most prominent features will be its elegant barrel roll, the train turning vertically to pass perfectly through the keyhole cutout of a watchtower. Image © Six Flags.

Consider Raptor at Gardaland. Located on its own island amid a murky, boggy lagoon, Raptor’s area is littered with devastated government facilities, barbed-wire fences, flashing emergency lights, and more. But this heavy theming isn’t just to increase pre-loading jitters. Rather, it’s built right into the experience. The wide train races through a clawed-up fence, twists seamlessly through precariously-placed supports, glides through a mist-emitting box nearly the exact length and height of the train, and twice, performs elongated barrel rolls to slide through a gnarled, toppling watchtower and a split dead tree.

It’s fun to watch for onlookers, and an incredible visual treat for riders, who duck, shriek, and contort to try to avoid the would-be collisions throughout the ride.

Great America’s X-Flight doesn’t try to outdo Raptor in the set piece interaction department. Frankly, it makes sense. Raptor appears to be built into a thematic environment and not the other way around. In true Six Flags style, attention here is spent on the ride with a few fun details, but nothing extraneously added. That is, no pre-shows, no real sense of immersion, and no large sets with which to interact. The emphasis is on the ride.

That’s not to say the very effective, near miss visual capacity of the Wing Rider coaster style isn’t utilized. Quite the contrary: the ride does skim through a low-hanging tunnel, and performs an elongated, hangtime barrel roll through a keyhole in a flight watchtower. But in a Six Flags thrill park, I suppose the assumption is that visitors care more about the five inversions and the overbanked turns than the full cinematic experience. Sounds right to me.

X-Flight has plenty to offer without the near-misses, including a compact, spiraling layout that couldn’t be more different than Wild Eagle’s, and a hard-to-explain inverting, twisting first drop that reverses direction and places riders upside down at the top of the lift hill. It’s sure to be as much of a visual calling card as the keyhole inversion. 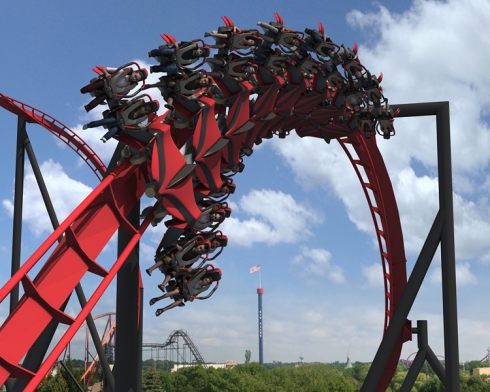 X-Flight will be an incredibly unique attraction, a good fit for Six Flags Great America, and a great springboard for the many Wing Rider coasters surely yet to come. Image © Six Flags.

X-Flight is a unique roller coaster, even if it will presumably lose its “first wing coaster in the US” title to Dollywood's Wild Eagle. It is enough to warm visitors up to the concept of a Wing Rider, while not trying to be the most intense or out-of-control coaster in the world. Indeed, what’s wrong with a mid-sized thrill machine that brings a new concept to the forefront and promises to make the Wing Rider a real success?

And like it or not, the diversity of these first few Wing Riders is key. Some enthusiasts were aghast when Dollywood announced that Wild Eagle would have no extra set pieces added to the ride. Some saw it as a waste of one of the concept’s most unique possibilities. But perhaps now we can see that this is a very versatile design, capable of holding its own with nothing extra or of being incorporated into a themed environment. If every Wing Rider across the country were one or the other, this coaster will quickly die away as a one-trick pony.

Instead, X-Flight seems perfectly poised to be an exemplary model of a really fun, sporty, versatile ride that will doubtlessly catch on in the global coaster market. We can’t wait to ride it.