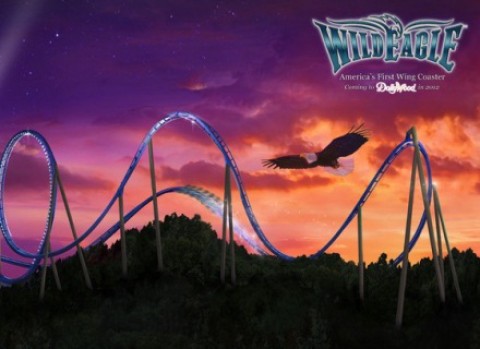 In 2011, the wings of thrill will carry you away on Dollywood's Wild Eagle. What can you expect of the first Wing Rider coaster in America?

It seems like the world is all gloom and doom nowadays. The battle between technology and nature rages on as the dismal, apocalyptic, government-centered, war-torn future seems all the rage in amusement parks. Take, for example, B&M’s new Wing Rider coasters. By 2012, there will be four in existence. First came Raptor at Gardaland, themed to a tremendous, insectoid beast ravaging a military base. Next spring, Thorpe Park is poised to open the apocalyptic, genetically altered, war-zone based The Swarm. Shortly thereafter Six Flags Great America will open X-Flight, themed to a top-secret government flight prototype project.

But at a place like Dollywood, that just won’t do.

There’s no time for twisted steel and screams of terror at Dolly Parton’s Smoky Mountain getaway (except on Mystery Mine), so the creative team at Dollywood decided to take the whole “flight” idea in a different direction – one that shouldn’t have taken three wing-themed coasters to arrive at. Instead of metal wings, gasoline, and fiery thrusters, Dollywood’s Wing Coaster will invite guests to experience the profound, unfaltering, natural flight of a Wild Eagle. 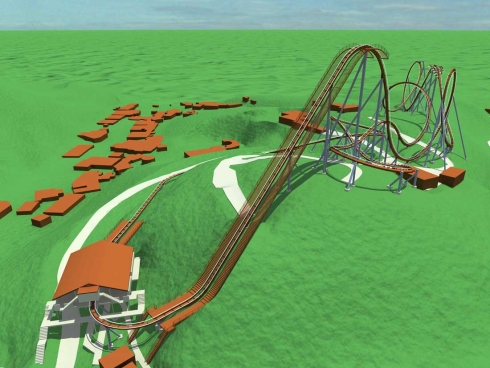 Wild Eagle's layout will focus on large inversions and sweeping turns rather than compact motions and interaction with set-pieces. Image © 2011 Dollywood

Barring any mechanical delays, Wild Eagle will be the first Wing Rider coaster in the United States. The cantilevered, wing-style, edge-riding coaster style that caused problems for Intamin (with their notoriously bumpy Furios Baco coaster) and bankrupted Arrow (with their then-unimaginable X) seems to have finally found a comfortable home with Swiss manufacturer Bolliger and Mabillard, a coaster designer renowned for their reliability and comfort. While Wild Eagle does not launch like the former or have spinning seats like the latter, it does have a few tricks up its sleeve.

The Wing Rider is catching on with similar electric ferocity as the company’s earlier Inverted style did, beginning with Six Flags Great America’s “Batman: The Ride,” and producing such world-famous coasters as Universal’s Islands of Adventure’s Dragon Challenge, Busch Gardens Tampa’s Montu, and Alton Tower’s Nemesis. So while the Wing Rider design isn’t necessary as “tried and true” as the inverted coaster, there’s no denying the versatility of the design.

What is the theme? 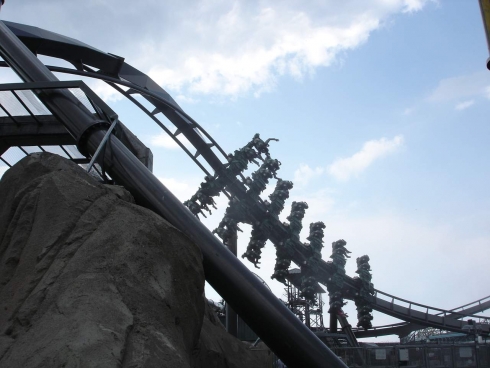 So far, all three of those “apocalyptic” Wing Riders are meant to focus on close encounters. All three present incredible interactivity in the form of “head choppers” and “foot choppers,” visual elements around the track that give the illusion to both riders and onlookers that collision is imminent. It’s the graceful stylings of the super-wide train that really make those would-be interactions succeed, and they’re interesting enough. To watch Raptor turn entirely on its side and effortlessly slide through a cracked-down-the-centre tree is truly riveting, and the image of Great America’s X-Flight gliding through a vertical watchtower in mid-heart line roll is captivating.

But the Wing Rider design is not a one-trick pony. Dollywood has stated that there will be no scenery added to the ride aside from its natural terrain. That means no gnarled fences to skid along, no keyholes to squeeze through, and no airplane wings to slide under. Instead, Wild Eagle, situated quite centrally in the park’s wooded, hilly terrain, will use nothing but nature to extract its thrills. 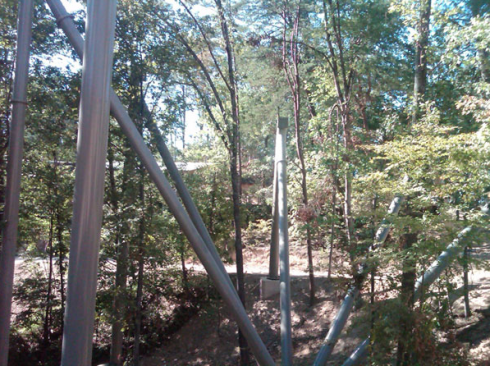 Construction work for Wild Eagle is done with the utmost care to protect the natural environment around it. Image © Dollywood.

Wild Eagle would certainly be classified as a terrain coaster. Part of the lift hill is literally constructed into a hillside, and the combined efforts of B&M and Dollywood have turned to conserving as much of the natural foliage as possible. And instead of low-to-the-ground maneuvers and interactive inversions, the emphasis of Wild Eagle appears to be the freedom of flight. Where the other three Wing Riders focus on tight turns and sharp banks, Wild Eagle is massive, with sweeping turns and giant inversions. Instead of pale gray or black, Wild Eagle is sky blue, which is appropriate – its hilltop image will be silhouetted against the dazzling Tennessee sky, blending in effortlessly.

And it won’t just earn the right to be called America’s first Wing Rider coaster when it opens in March. It will also be the largest investment in Dollywood’s history ($20 million), the tallest coaster at the park (210 feet / 64 m, with a 135 foot / 41 m, terrain-hugging drop), the park’s fastest (at 68 miles per hour / 109 km/h), and the ride at Dollywood with the most inversions (4).

If you’ve had the chance to ride a B&M Dive Machine in the outer seats, you might at least have some idea of what to expect: incredible forces, fairytale smoothness, dramatic swooping motions, and enough speed to pull a tear from your eye.

With a massive vertical loop, a zero-g roll, an Immelmann loop, and a giant flat spin (that’s the action-packed B&M version of a corkscrew), Wild Eagle will have one of the more dizzying, breathtaking layouts of any coaster at the park (which is nothing to sneeze at, since Dollywood is home to both modern and classic coasters with varying levels of interactivity with the environment and thrilling maneuvers).

Wild Eagle at Dollywood may not use the same interactive, close-encounter elements as its three sister rides, but perhaps that’s all for the best. After all, the new coaster is about freedom, speed, and height. It doesn’t try to tell a story about a desecrated government facility of barbed wire, or a war-torn technological future. It’s about flight – the original kind; the kind that takes place in forests and blue skies, with nothing but clouds above you and treetops beneath you.

With the way Dollywood is conserving the natural surrounding areas, it’s hard to imagine that Wild Eagle won’t have a few visual interactions with the foliage around it, but that’s not what this is about. Rather, we’re thrilled to see that the Wing Rider design is being expanded, perhaps even bred into two separate categories. The experience on the massive, weightless Wild Eagle will be decisively different than the ride on the ultra-compact, low profile Swarm or Raptor, after all, and that sort of differentiation is required if the Wing Rider design can really catch on and not turn into a fad coaster.

All-in-all, it looks as though Wild Eagle is poised to bring Dollywood yet another world-class thrill ride that further diversifies its already-fantastic attraction line-up.