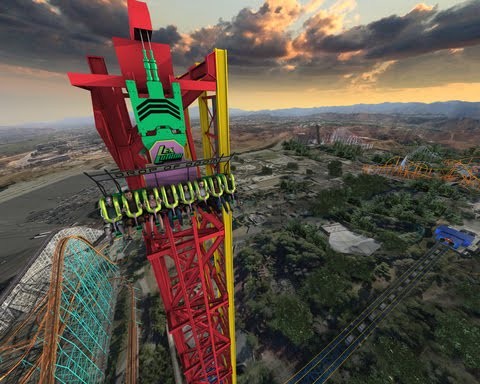 It’s a bird. It’s a plane! It’s... don’t even think about it. The world's tallest drop tower is on its way to Six Flags Magic Mountain. What can you expect?

When it comes to dizzying, death-defying, gravity-strangling heights, Superman is being demoted to silver status. In 2012, Six Flags Magic Mountain in Valencia, California plans to open Lex Luthor: Drop of Doom as the infamous comic book villain finally seems to conquer his Kryptonian archnemesis. And his diabolical Drop of Doom looks like it may truly overtake Superman once and for all. But above and beyond the comic-style turmoil, it’s the staggering statistics and impossible design of this strata-drop tower that may leave you nearly as breathless as the ride itself. 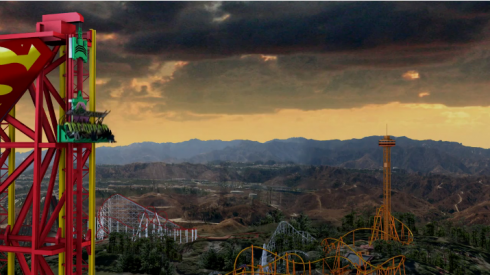 Lex Luthor: Drop of Doom is billed as the world’s tallest vertical drop ride, and all predictions point to that record sticking. Riders on Drop of Doom will be placed in one of two eight-person gondolas situated on either side of the ride’s massive steel lattice tower. Then, the two carts affixed to either side of the tower (moving independently, if the official animation is to be believed) will climb the lofty 415-feet of steel in 95 seconds.

That’s about a minute and a half to soak in what will surely be one of the most serene and incredible views offered at any amusement park, with the rustic Californian hills and valleys all around.

And while you’re up there, pondering the unprecedented, 400-foot, 85 mile per hour, villainous freefall of fate that awaits, you and your fellow riders may feel an unexpected, rapidly passing adrenaline rush or two. But it’s not your own. 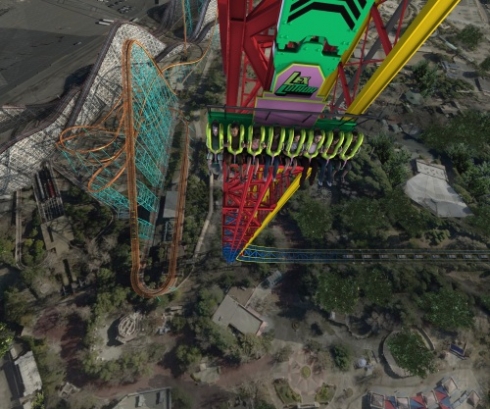 In summer 2011, the world’s most recognizable superhero and his Travel-Channel-favorite roller coaster namesake received a facelift when "Superman: The Escape" was repainted, re-themed, and re-directioned as the backward-launching "Superman: Escape from Krypton". And come 2012, he has yet another reason to make that escape, because "Lex Luthor: Drop of Doom" is being integrated into the existing 415-foot tower of Escape from Krypton.

For them, it means that the two arch-nemeses need to find a way to play nice. For you, it means that, during your ascent, you just may feel the rush of a cart blasting up the massive tower behind you. And if riders on either attraction can summon the strength to scream, you just may feel a false alarm or two as your anticipation-ridden rides merge, if only for a moment, into one massive, unbelievable experience.

The entire ride should last less than two minutes (with the lengthy ascent eating up most of that time), but it's the few glorious, weightless seconds of 85 mile per hour freefall that should really twist stomachs. After all, when one of the world's greatest villains builds the world's tallest drop tower, cowards need not apply. Go Big, indeed.

So what does Lex Luthor: Drop of Doom have to offer the adventure-seeker besides white knuckle thrills? There’s no question that this drop tower’s statistics are impressive enough to stand alone, but given Six Flags’ recent interest in incorporating smart, stylish superhero references into their attractions, we have faith that Drop of Doom will contain a sufficient build-up and storyline.

Take, for example, Doctor Doom’s FearFall at Universal’s Islands of Adventure. Like Drop of Doom, it may look like a carnival-class drop ride to onlookers. But a simply designed queue, a short voiceover spiel during the loading procedure and a few surprises make it an experience that you can really sink your teeth into, and one that nearly holds its own among rides like The Amazing Adventures of Spiderman and Harry Potter and the Forbidden Journey.

It seems unlikely that Six Flags would exert so much effort on the Superman: Escape from Krypton reconfiguration, only to make its second-phase expansion ride a generic, off-the-shelf attraction, especially when even the slightest hint of a storyline or the smallest attention to detail can go a long way with a drop tower, like Busch Gardens Williamsburg’s Mäch Tower.

And since it’s being designed and constructed by Intamin (creators of Cedar Fair’s many Drop Zone: Stunt Towers and the former record-holder, Giant Drop at Dreamworld in Australia), we can rest easy that Drop of Doom will inspire awe and terror in all who experience it (coincidentally, Giant Drop is also constructed into a pre-existing Intamin launched coaster which, just like Superman, was just this year reversed to launch backwards as Tower of Terror II).

Lex Luthor: Drop of Doom should be a massive hit at Six Flags Magic Mountain. It’s almost odd to consider that the park, known so well for its fascinating assortment of prototype and classic coasters, has been without a drop ride since 2004’s closure of the park’s Intamin first generation drop ride, Freefall. And while the removal of the park’s Déjà Vu roller coaster again ties it with Cedar Point in the unofficial “Coaster Wars,” the world’s tallest drop tower is certainly a great replacement.

Of course, we do have our concerns about Lex Luthor: Drop of Doom. With an ascension  time of 95 seconds and only 16 riders at a time, the ride has a theoretical, best-case-scenario capacity of 550 riders per hour – dismally low for a park of Magic Mountain’s size. In comparison, the park’s Tatsu flying roller coaster (a notoriously slow loader) has a theoretical capacity of 1600 riders per hour. Déjà Vu (again, one of the slower loading coasters) maxed out at 870.

So for at least the first few years, Six Flags stands to make quite a pretty penny off of Flash Pass sales stemming from their three newest attractions being very low capacity (Drop of Doom, Escape from Krypton, and Green Lantern: First Flight, also opened in 2011). So maybe that’s all part of the plan.

One thing is for sure, though. Lex Luthor: Drop of Doom will be an unprecedented drop ride, offering a thrill that no other attraction on Earth can. So perhaps an extra wait will be worth it. 400 feet, at 80 miles per hour... Sounds pretty worth the wait to us. We’ll know for sure come Spring 2012.