Dreamworld to open revamped Tower of Terror in September

Dreamworld is to launch an updated version of its Tower of Terror attraction in September, which will see riders traversing the original circuit in reverse.

The ride will close on August 18, 2010 and will reopen as Tower of Terror II four weeks later to coincide with the start of the September school holidays in Australia. The major change to the 14-year-old attraction, which Dreamworld claims has carried over 8 million passengers, will see the cars being switched so that riders face in the opposite direction to the current set-up.

Tower of Terror is a steel shuttle rollercoaster which blasts guests using an electromagnetic launch system at speeds of 100mph up a 377-feet-tall tower. The ride car (dubbed the "Escape Pod") reaches a maximum height of 328 feet, before plummeting back down into the station below.

Currently, guests face forwards on the Intamin-built coaster, meaning that they have a view of the sky as they are fired towards it. In Tower of Terror II, they will instead start facing a "dark void" before seeing the ground rapidly recede away from them. They will then see it rush back towards them as they drop back down into the station, experiencing weightlessness both on the launch and on the fall. 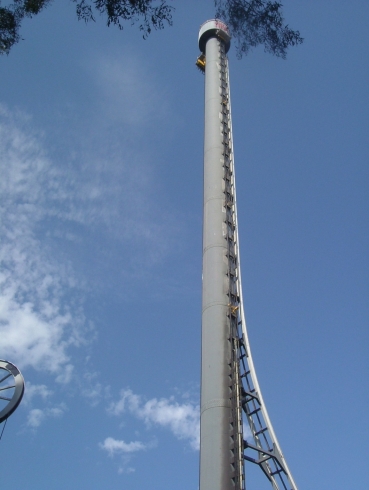 Tower of Terror opened in January 1997 and is one of Dreamworld's headline attractions. Although some rollercoaster fans dispute its status as a "true" coaster due to its short circuit, it is often listed as the fourth fastest rollercaoster in the world. Six Flags Magic Mountain hosts the only other Intamin reverse freefall coaster in the world, Superman: The Escape. That ride is also set for a major upgrade, and is currently closed until Spring 2011.