It was announced earlier that Universal Orlando Resort has extended their theme park operating hours this upcoming Saturday and Sunday, with Universal Studios Florida now opening at 8:00 AM and closing at 10:00 PM and Universal’s Islands of Adventure opening earlier at 8:00 AM this weekend and closing late at 10:00 PM on Sunday. In addition, looking further out Universal Studios Florida has extended its operating hours next weekend as well, due to anticipated large crowds for the Halloween weekend. And while this may sound like great news for Universal fans, an email has been sent out that asks one group to specifically stay away during these extended hours: annual passholders.

This probably isn't all that surprising as for the past two weekends in a row, Universal Orlando Resort has closed to new guests due to capacity, with the resort turning away guests who don't have hotel reservations at the parking garages. And with Halloween only days away, capacity is expected to be reached even sooner on weekend days in the parks. You can read the full email to passholders below, which strongly urges these guests to consider visiting on a weekday rather than the weekend for the next couple weeks: 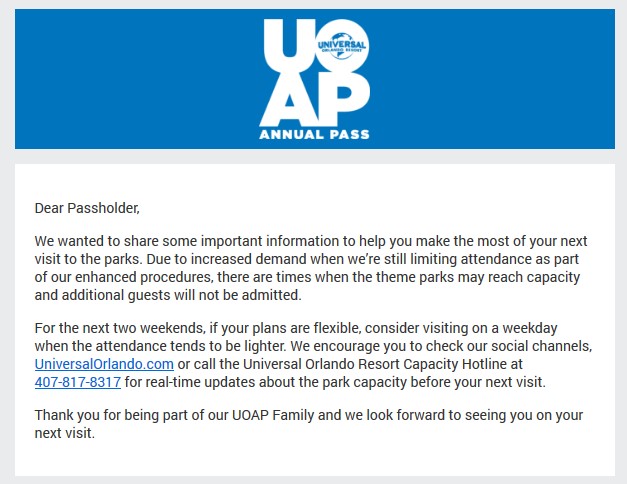 Though the theme parks are expected to remain busy for the foreseeable future, Universal seems to be testing out bringing back nighttime entertainment, as Universal Orlando's Cinematic Celebration night show is currently scheduled for a single performance this weekend: 9:45pm on Saturday October 24, 2020. If this test proves successful, we may see more showtimes added in the near future.

Though Universal Orlando Resort's annual passholder appreciation days are still going on, it looks like, at least for now, the resort is encouraging these faithful guests to keep their distance for the time being.