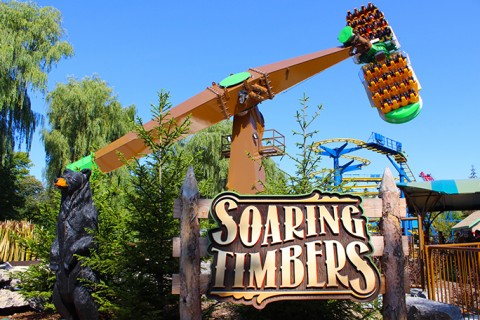 Since the early day of theme parks, flat rides have been a stable of the amusement park experience. Flat rides are defined as non-roller coaster rides that move rides on a plane typically parallel to the ground. Rides like bumper cars or a Ferris wheel are examples of flat rides. While these generally make up most of a park’s attraction line-up, they are typically overshadowed by the roller coasters.

One theme park, however, is leading the charge in offering just as many exceptional and thrilling flat rides as it does unique roller coasters. Canada’s Wonderland in Vaughan, Ontario offers some of the wildest and most unique flat rides of any theme park in North America. You can spin around in a barrel, take to the sky in a pumpkin, or fly in a canoe. But even those rides don’t make our list of the six most unique flat rides at Canada’s Wonderland.  Would you ride these wild flat rides?

Have you ever wondered what it would be like to be on the swinging end of a lumberjack’s axe? Well, even if you haven’t this ride offers just that. Lumberjack opened in 2018 and is one of the most fun-looking flat rides I have ever seen. Riders sit in rows of three facing one another at the end of two large axes. The axes then swing back and forth, eventually making a complete 360-degree loop. Riders are sent head-over-feet up 75 feet in the air. While the swinging and looping style of the ride is not uncommon, the fun theming really sets it over the top.

Riptide was formerly Cliffhanger, and reopened as Riptide in 2007 and combines a spinning, flipping flat ride with a water ride. Riders sit on one of two giant rotating gondolas. The arms of the ride begin to move in a 360-degree motion sending riders flipping and swinging up and over the top and down into a fountain of water.  It looks to make for one disorienting experience and riders are twirled and sprayed with water at the same time, but must be refreshing on a warm day.

Shockwave--built in 2001--is one of the rides on this list that impresses mainly due to the physics of the ride. The ride just looks crazy with its five long gondolas that spin, flip, and twist in every possible direction while the arm of the ride swings and rotates at different angles. It gives the allusion that the ride gondolas are going to hit the ground, but of course, they never do. At its highest point, Shockwave sends riders up in the air over 60 feet high. The way the ride manages to spring and flip and rotate in all different directions without crashing into the ground is a scientific marvel to me. Though, it is definitely a nausea-inducing experience I would rather observe from the ground.

Sledge Hammer was built in 2003 by HUSS Park Attractions. It is the first and only "giant jumping machine" ride. Guests load onto six claw-like arms that hold eight riders each. During the ride, the gondolas spin individually but also spin around the center of the rider. As the arms rotate and spin, they are also sporadically lifted up into the air and then plummeted down toward the ground. It is wild to watch this ride operate and see the arms fly up and down while spinning so even if the ride isn’t for you, you can enjoy the view safely from the ground.

Soaring Timbers is another ride on this list that will wow you with its physics. It was built in 2017 and was the first of its kind in North America. This massive flat ride also gives that near-miss allusion as it sends riders plummeting toward the ground. Riders sit in two gondolas that flip independently of one other. The gondolas are then swung and rotated 360 degrees. The gondolas are lifted into the air over 60 feet. Like Shockwave, it looks to be a truly nauseating experience that some may prefer to observe from the ground.

Skyhawk was also the first of its kind in North America when it was built in 2016. This airplane-themed flat ride allows riders to decide how intense they want their ride to be. Riders can choose to leave their “airplane wings” flat and simply sit while they leisurely swing around the main tower. If that is too boring, riders can instead lift the flaps of their “airplane wings” to induce swinging and even barrel rolls. There is even a challenge to see how many barrel-rolls a rider can achieve in one ride. Did we mention that all of this is happening while riders are suspended 135 feet in the air?

Have you been to Canada’s Wonderland and ridden any of these wild flat rides? Personally, I do not have the stomach for any of these rides, but would you ride them?