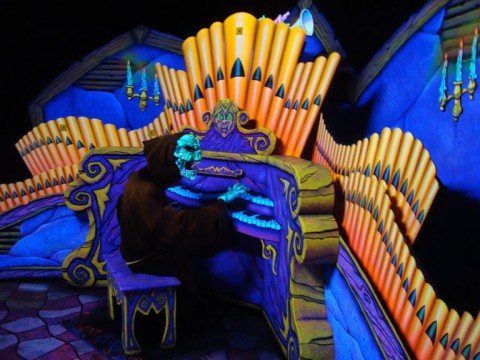 Who doesn’t love a dark ride? One of the longest-enduring and most beloved amusements on Earth, dark rides have existed since before the electric lightbulbs. From humble origins as darkened, waterwheel-powered “Tunnels of Love” and “River Caves,” dark rides have become some of the most technological storytelling tools in theme parks’ arsenals – from ghost blasting to soaring with superheroes…

But have you ever wondered who’s making the magic? Welcome to the Industry of Imagination, a new series in which we’ll peel back the curtains to explore some of the real organizations who design, develop, fabricate, and install the rides we know and love.

One of the more enduring, widespread, and successful design firms in the industry today is known by a single name: Sally Dark Rides. Headquartered in Jacksonville, Florida, Sally has spent nearly five decades creating dozens of dark rides found across the globe. From boardwalk, blacklight ultra-classics to innovative, interactive, tech-driven trackless rides, chances are that you’ve seen a Sally creation firsthand… maybe without even knowing it.

Today, we’ll spotlight this time-tested firm and how it came to be, then highlight a few of our favorite Sally creations both well-known and niche… And whether you’ve heard of Sally Dark Rides before or not, we know your first question….

Given the firm’s name, you might understandably assume that Sally was a company founder. Well... kind of.

Rather, one of the company’s real founders – John Rob Holland – was in school to become dentist. There, according to the firm, a professor in a creative communications class tasked students with developing an unexpected teaching tool. Holland’s was Sally – a hand-made animatronic figure with pre-recorded audio and matching mouth movements.

Holland (who did officially become Dr. Holland) brought Sally home, where a neighbor named John Fox convinced him to use the figure as part of a Halloween display to great success. Suffice it to say that in the 1979, the pair officially launched Sally Unlimited, Inc.

Believing that a programmable, moving, speaking (and most importantly, tireless) model could be a boon to retailers tired of static mannequins and looking for a memorable campaign, a refined Sally was created and brought to the National Association of Display Industries.

At least in part, it worked, with Sallys becoming the spokespeople for a beauty supply company, a line of denim jeans, and even the Women’s Army Corp Museum in the late ’70s.

Soon after, Sally gained a new skill, with a “Sally at the Piano” (above) model that could play for department store audiences without interruption… and was used for exactly that purpose at stores in New York, Chicago, Atlanta, and beyond. But obviously, Sally’s expertise in moving, talking robotic figures would lend itself to more than just retail.

As co-founder John Wood recalled, it wasn’t until Sally sold an animatronic figure to the Kennedy Space Center Visitors Complex (which, in the ’70s, underwent a significant reinvestment in order to match the polish that visitors expected when traveling from the new Walt Disney World) that Sally found its niche: not retail, but entertainment.

That lined up perfectly with the boom of family entertainment centers that spread across the country in the late ’70s, each with animatronic-led musical revue shows. Sally was responsible for many of the animatronic figures that populated Showbiz Pizza Place.

In the early ’80s, Sally was chosen by designer Gary Goddard as a primary supplier for the legendary (and animatronic-heavy) Six Flags Power Plant – an ultra-ambitious, immersive family entertainment center mixed with experiential shows, retail, and dining located in a real turn-of-the-century power plant. A sort of story-centered DisneyQuest and a Meow Wolf progenitor, the Power Plant didn’t last long…

But when the market for family entertainment centers contracted soon after, “We looked around, and said, what do we do now? The obvious choice for Sally Corporation was to follow in Disney’s footsteps. We should attempt to rejuvenate dark rides and the regional theme park market.”

But Sally’s experience there did elevate the company’s standing. And in the mid-’90s, the firm took off running…

In 1995, Sally opened its first dark ride – The Great Pistolero Roundup, wedged into a former Mexican restaurant at Family Kingdom Amusement Park in Myrtle Beach. You have to imagine that Sally’s “interactive dark ride” was truly among the first of its type. Disney’s equivalent – Buzz Lightyear’s Space Ranger Spin – wouldn’t open for three more years.

And really think about that: before Sally stepped up, dark rides were really a thing of the past for most parks; ultra-classic funhouses and ghost trains that flickered out of existence year after year. Only parks on the level of Disney’s and Universal’s invested in the genre, and by the ’90s, even that was in the form of cutting-edge, larger-than-life, “Ride the Movies” installations like the Modern Marvels: Indiana Jones Adventure, Star Tours, and Journey to the Center of the Earth.

But Sally’s innovation suddenly made dark rides achievable for seasonal, regional parks again. Spurred on by the thrill of interactivity, Sally offered an all-in-one design-build service that could ripple across smaller parks, balancing the adrenaline-packed punch of the “Coaster Wars.”

John Wood told Blooloop, “After completing the first design-build, we were pretty much solidly a dark ride company.”

And in fact, Sally’s next big innovation set the course for the last 25 years of dark rides to come out of the company… On the next page, we’ll spotlight a few of Sally’s most well-known and groundbreaking rides right up until this 2022’s jaw-dropping adventure…