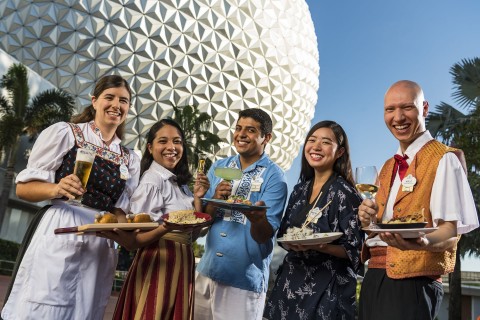 It’s one of the longest persisting rumors in Disney history: is Walt Disney World finally about to add new countries to EPCOT's World Showcase or Disney’s Animal Kingdom?

Disney’s international lands and pavilions have remained one of the most charming elements in Walt Disney World. Mostly represented in Epcot’s World Showcase and Disney’s Animal Kingdom, Disney’s nation pavilions are a beautiful example of fantasy-meets-reality: a thriving world’s fair celebrating the culture, history, cuisine, and landmarks of the diverse nations of the world.

Rumors of new World Showcase pavilions are nothing new—I remember hearing them repeatedly when I was a kid in the ’90s. Many names have been floated over the years as Disney’s next international pavilion: a Switzerland pavilion with a Walt Disney World Matterhorn? An equatorial Africa pavilion to replace the Trading Post? We received some forward movement with the arrival of both Africa and Asia at Disney’s Animal Kingdom but not much has happened since. Disney has dipped a toe into this arena with the inclusion of dozens of different countries in Epcot’s annual festival offering but news of new pavilions has remained stagnant.

In most cases, controversy and practicalities have kept Disney from moving forward on new pavilions for both Epcot and Disney’s Animal Kingdom, but we have to admit, there are a few obvious choices we are surprised they haven’t built yet… and a few Disney considered in years past that we wonder if they will ever revisit.

As of 2021, the rumors are back, and it’s looking increasingly likely that Disney might finally be about to make the long-awaited announcement of a new international pavilion at Walt Disney World. What might it be? Here are some likely (and unlikely) possibilities…

If there’s a European nation that makes sense to add to World Showcase, it’s Greece—to the point petitions have actually been widely circulated to make it happen.

Greece has a character entirely unique within Europe. This beautiful Mediterranean country holds some of the richest histories of any nation on the planet, with vibrant traditions of architecture, dance, food, music, and literature. The entrancing white and blues of coastal towns like Mykonos and Santorini would provide a beautiful contrast within World Showcase, and Disney could replicate famous landmarks like the Acropolis and even distant mountains to provide depth.

On top of this, Greece is an easy choice because Disney already has multiple intellectual properties set in the country—mostly from the film Hercules, which may be getting a live-action remake soon.

Oh, and did we mention the food? There’s no doubt Epcot would be a better place for the permanent arrival of gyros, dolmades, spanakopita, choriatiki, and flaming saganaki. Sure, we can work a road trip to beautiful Tarpon Springs into our next vacation, but we think a Greek pavilion remains a no-brainer for Disney.

In our exploration of potential pavilions for World Showcase, we also wanted to look at some left-field options—possibilities for countries that Disney has actively considered or that fans have long suggested. These aren’t as likely as top contenders on the list, but they come up frequently when people start dreaming about new pavilion ideas.

A good example of this would be an Egyptian pavilion at Epcot. While you could make the argument that Epcot already has Morocco as a north African pavilion, Egypt carries a rich character and history all its own that would certainly stand out amid World Showcase, offering new opportunities for cuisine, culture, and adventure attractions. From the pyramids of Giza to the Nile delta, there are a lot of wonders Disney could explore within such a pavilion.

There are a few things going against an Egyptian pavilion. For one thing, Disney doesn’t have any intellectual properties set in Egypt—their primary competitor, Universal Studios, has maintained this edge with The Mummy. The other issue is one you will see come up a few times on this list—Disney has remained extremely cautious about setting up lands and pavilions highlighting regions that struggle with instability. While an Egyptian pavilion would surely be spectacular, given Disney’s tendency lately to stay ultra-circumspect in this area, Egypt’s troubled political climate is likely enough to convince Disney to never pursue the project.

Of all the choices explored in this list, this one is the biggest head-scratcher for us—why has Disney never added Australia to Disney’s Animal Kingdom?

We’re not the only ones who have asked this question. Imagineer legend Joe Rodhe brought it up recently, citing the idea that the lands of Disney’s Animal Kingdom were designed more to represent biomes and environments rather than specific countries. While this is true to a point, the idea falls a little flat due to the fact that two of the park’s major lands are named after continents—Asia (specifically South and Southeast Asia) and Africa (specifically grassland nations).

Australia is a logical third choice in many ways. For one thing, Australia contains a wide range of biomes including deserts, grasslands, forests (both tropical and subtropical), coastal reefs, and Mediterranean woodlands. Things get even richer if you throw New Zealand into the mix, which adds tundra and mountainous regions as possibilities.

Most importantly, Australia and New Zealand are home to some of the most unique animals on the planet, such as koalas, kiwis, kangaroos, echidnas, frilled lizards, platypuses (Platypi? Platypodes?), and a stunning range of birds and fish. Even if Disney focused on nothing but the Australian outback, it could make for a spectacular land.

Similar to Greece, there’s another factor that makes Australia an easy choice—once again, Disney has an intellectual property set there in the form of The Rescuers Down Under. While that is an older film, it has continued to pop up in Disney parks (particularly for its whopper of a soundtrack). This film alone could provide content for an outback-centered flying attraction, or creative minds could even concoct a new Indiana Jones adventure that could fit in the space.

We can’t do an exploration on theoretical pavilions for World Showcase without talking about the big red bear in the room—Russia.

Russia is unique in the discussion of World Showcase as it is one of the countries that came the closest to having its own pavilion in Epcot. I remember hearing discussions about it as a kid—an epic pavilion appropriate for the largest country on earth. Original plans included a replica of St. Basil’s Cathedral, a sprawling courtyard, a ride based on the tale of Ivan and the magic pike, and a massive animatronics show on the scale of The American Adventure.

Disney got reasonably far into the project before the fall of the Soviet Union in 1991. The dramatic political shift launched the plans into the stormy waters of controversy—an even bigger problem since Disney still relied on sponsors to fund pavilions back then. Since then, the idea of a Russian pavilion has remained shelved and likely will for the foreseeable future.