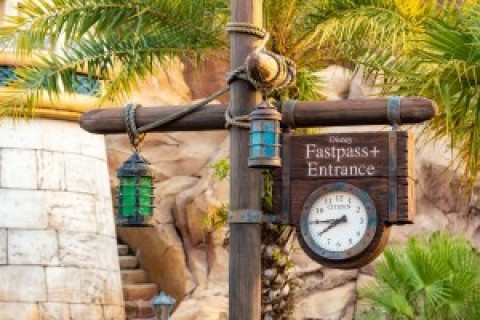 We’ve said it once, and we’ll say it again—it’s been a weird year for Disney fans.

The 2020 pandemic changed a lot of things at Disney parks, instigating lengthy closures, changes in attendance patterns, and the introduction of new policies like required Parks Pass Reservations. Disney is, understandably, doing everything they can to recoup losses and get things back to normal, meaning we’ve entered a new era of company-wide belt-tightening. Perks like MagicBands, the Magical Express, and all-day park hopping have gone bye-bye while upcharges multiply.

It’s not a huge shock that the Fastpass+ system became an early casualty of the season—a shift now been confirmed to be permanent. Though much-loved by guests as a means of lowering waits for a few rides a day, the system came with some significant problems, primarily in the way that it threw off crowd control measures in the park and stand-by queue lengths.

We’ve long known that Disney has been pondering alternatives to FastPass+ at Walt Disney World. That alternative has arrived, and unfortunately, it’s going to cost you.

Starting in October, guests will have access to three new systems in lieu of Fastpass+. The first is a free update to the My Disney Experience app called Disney Genie, a service to help guests plan their days and determine the best rides to head to when (a concept that may end up proving an interesting circus in and of itself).

The other two additions are Genie+ and Individual Attraction Access, and these are where the controversy kicks in. Genie+ is essentially a paid version of Fastpass+, similar to Disneyland’s already-existing MaxPass or Disneyland Paris’ Premier Access. For $15 a day per guest, Genie+ will grant guests access to “Lightning Lanes” for specific rides, one at a time. These queues are essentially a rebrand of the Fastpass+ queues, only you won’t have to reserve your spot months ahead of time.

The key twist is that Genie+ will not grant access to Lightning Lanes for E-Ticket rides—to access those, you’ll need to use a different system called Individual Attraction Access. For a separate fee (that could be anywhere from $4-$50 per guest, per ride), guests can gain access to Lightning Lanes for Disney’s most popular attractions. Disney hasn’t released a list of these rides yet, but it’s safe to say that E-Tickets like Star Wars: Rise of the Resistance and Avatar Flight of Passage will be on the list. Guests will be limited to two Individual Attraction Access purchases a day.

While not as restrictive as the olden days when guests had to buy tickets for individual rides, it’s still a form of pay to play, and it’s fair to see why many guests aren’t happy.

Despite our reservations, we want to give Genie+ and Lightning Lanes a fair assessment. Is Genie+ going to be a boon for Disney parkgoers or a source of all-new problems?

Here are four potential benefits we see, as well as four significant negatives…

1. Pro – Planning a Disney day may get easier

I will admit that as a longtime Disney parkgoer familiar with strategies for reducing waits in line, the concept of Disney Genie (the free planning service) is difficult for me to wrap my head around. Most savvy trip planners go out of their way to do the opposite of what crowds are doing at Disney parks, sometimes using tools like TouringPlans.com as a guide. It’s hard to grasp how encouraging guests to all use the same day-planning system won’t backfire—veteran visitors may ironically be tempted to do the opposite of whatever the app recommends.

Despite this reservation, however, Disney has wowed us before with new technologies, and there are a number of potential benefits to the combination of Disney Genie, Genie+, and Individual Attraction Access.

For one thing, these systems may help make Disney parks easier to navigate for casual visitors. If Disney plays their cards right, they could actually use this system to cleverly encourage dispersing guests more evenly across the parks, meaning you won’t need to be a Disney expert to have some hints on where to go to hit lower queues. We don’t know enough about Genie yet to know how this will play out, but there are potential benefits for parkgoers overall if it is used smartly instead of just as a marketing tool.

There’s no way around this one—for most guests, the arrival of Genie+ and Individual Attraction Access sounds like a real pain in the wallet.

Disney has been rightfully criticized in recent years for pricing out the middle class—families who used to be the bread and butter of park business. It’s one thing when Disney adds upcharge experiences as potential enhancements to a Disney vacation—I’ve enjoyed a number of these on special occasions—but these used to be extras that didn’t affect other guests much.

The problem is that Disney has been solving budget problems by cutting perks for the average guest—the most notable examples have been MagicBands, the Disney Magical Express, and now, FastPass+. Disney tickets, dining, and resort reservations are already expensive compared to other theme park destinations. A free Fastpass system was one of the things that set Disney apart from competitors like Universal Studios.

The truth is that some of the families that could benefit the most from systems like Genie+ and Individual Attraction Access are going to be the ones who will have the hardest time accessing it as raising costs have already stretched vacation budgets to the limit. For Passholders who visit frequently, the cost will be even more difficult to justify.

Another painful pill to swallow when it comes to Genie+ is that it won’t help guests get onto Disney’s most popular attractions, such as Avatar Flight of Passage or Star Wars: Rise of the Resistance. To get Lightning Lane access to E-Ticket attractions like these, guests will have to pay a completely separate fee for the Individual Attraction Access program. While you don’t have to have Genie+ to access this option, the costs will likely rack up quickly for families trying to reduce wait times overall.

We understand that there will be benefits to a paid system like Genie+ and Individual Attraction Access, perhaps even benefits for parkgoers overall, but it’s understandably exasperating for many guests to see more upcharges while perks continue to be removed.