Retro Rewind: Beyond Behind the Scenes - Universal Studios Hollywood 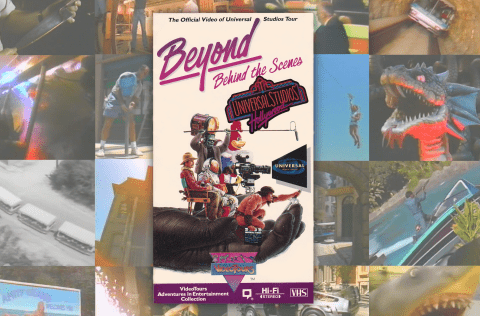 Never again will there be a home video format so universally embraced as VHS. At its peak, the medium was cheap, efficient, and inescapable. Anyone with a VCR, civilian or corporation, doubled as a distribution company. Horror-themed workout tapes. Children’s books turned into narrated slideshows. Beginners guides to self-levitation. Virtual fishtanks. Thrift stores are stocked with these two-reel outcasts to this day, doomed by their pursuit of niches that may or may not exist.

One niche that not only existed but flourished was the educational market. What better way to expose students to the wonders of the world than a field trip that costs $19.95 and a study hall? There’s a reason why entire generations feel warm and fuzzy at the sight of a TV cart. Not all educational tapes were made equal, and an actual movie beat any of them in a walk, but the best examples at least aimed for fun.

The VideoTours series could almost be mistaken for souvenirs. They were grouped by collection - History, Science and Nature, Adventures in Entertainment, etc. - but dedicated to distinct locations. The History Collection took viewers to entire towns - Old Salem - and specific institutions - Mystic Seaport Museum. The Science and Nature Collection stuck closer to zoos and wildlife parks. The Adventures in Entertainment Collection, for lack of a better name, showed off amusement parks.

“If this place seems familiar, it is,” says the narrator over sunny b-roll of Courthouse Square. It’s one of the most recognizable street set in Hollywood history. It starred in its own trilogy, which is likely playing right now on the AMC network. Then the narrator says what everybody’s thinking - that’s right, there’s no mistaking the courthouse from To Kill a Mockingbird.

Beyond Behind the Scenes finds Universal in a contentious lull.

Back to the Future beat a box office slump to become the highest-grossing film of 1985, but none of the studio’s other releases had left as much of a cultural mark. Out of Africa might’ve swept the Oscars, but it didn’t sell t-shirts and certainly didn’t double as an advertisement for the backlot tour. For further contrast, a montage of unforgettable Universal hits page-wipes its way from Miami Vice to Bedtime for Bonzo.

Director of transportation Jessie Sperry uses the Delorean to demonstrate picture cars. Executive art director Raymond Brandt (The Incredible Shrinking Woman) walks down the quaint, fake streets and reveals how they turned one block into two Hill Valleys. The answer is details, so, so many details. “If you end up leaving a piece here and a piece here out of it, it’s like the actor leaving a couple of ‘ands’ and ‘ors’ and ‘buts’ out,” he says, selling his overlooked magic, “Pretty soon, it doesn’t start making sense.”

Two-thirds of the tape is about making that sense.

The 420-acre plot of Universal Studios - city not yet necessary - was, first and foremost, a fantasy factory. As much as the actual tour might show, Beyond Behind the Scenes shows more. It shows the process of production, soup to nuts, though not in the traditional order. The angle here is the pulse, the daily rhythm of backlot work. A single movie or TV show will spend months if not years in these facilities, cycling through the traditional phases, but on any given day, every part of the process is happening somewhere, all at the exact same time. How is that possible? To borrow a borrowed quote from Winston Churchill:  “Give us the tools and we’ll finish the job.”

Beyond Behind the Scenes is worth its weight in nuts and bolts. The camera lovingly zooms its way through buildings park guests could only dream of wandering. The scenic department looks like a Home Depot without the orange aprons. Special attention is given to the sign processor, an infernal drafting machine operated by deceptively simple keyboard. If it hangs and has text on it, at least before the digital age, this is where it came from. The prop department, by contrast, is just an antique mall with a Dewey Decimal system. Workers glide along the aisles with glorified shopping carts, comparing shelves of porcelain horses. All of it is indistinguishable, even the ornate portraits of every era and style. You wouldn’t recognize it if you were staring at it, but you’d certainly notice if it was gone.

“If you believe that we killed somebody,” says knife-wielding prop manager, Burt Cohen, “then we’re doing our job.” He makes his case with a copper blood tube up the back of the blade.

Horror, the genre that more or less made the studio, earns a turn in the spotlight. Through the magic of post-production, the legendary Court of Miracles set is desaturated and terrorized into a facsimile of its most famous appearances. 56 years later and still no contest - Frankenstein looks better. A few of the other monsters make stock photo cameos, but the real star of the spookshow is Alfred Hitchcock, who haunts the backlot in a more literal way. First, as a shaky impression by the tram driver, then as the most famous hell house in film history.