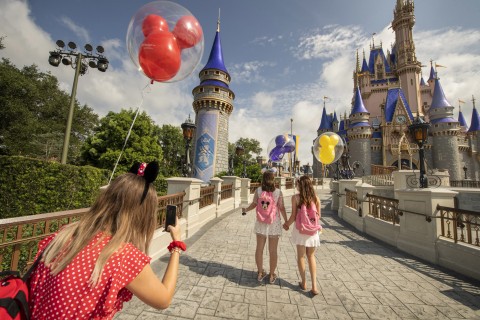 Walt Disney World is a magical place--once you’re inside the parks, it’s hard to think of leaving… Savvy travelers know, however, that there are some needs that are best fulfilled by looking outside of the Disney bubble.

Overall, Disney has done a very good job making their parks convenient places—most of the random things you may need during a day at Walt Disney World—food, gifts, sundries, etc.-- can be found inside the parks.

The problem is that not everything available inside Disney parks is the best quality or value—once inside, guests are usually willing to throw caution to the wind just to buy what’s available for the sake of convenience and not leaving.

In truth, there are some things you’re better off finding outside of Disney parks. Some of these are things that may be hard to find inside the parks without paying a premium price; others are things that are just better quality outside of the parks. Some of these can be most easily procured before your vacation but others are easily accessible by a short trip outside of Walt Disney World resort.

This is by no means an exhaustive list, but here are 7 things we found that you’re just better off finding outside of Disney parks…

If you’re picky about your coffee, a trip to Walt Disney World may test your patience…

Coffee isn’t necessarily hard to find in Disney parks. Coffee is available at most Disney dining locations, and coffee service locations abound, include Starbucks locations in all four parks.

The Starbucks locations in Disney parks offer the usual variety of drinks visitors are used to—Starbucks has gotten better overall at providing a better range of drinks, including some items for discerning coffee drinkers. The rest of the coffee in Disney parks is all from Joffrey’s—most of which are various syrup-glazed concoctions.

I personally am not a fan of Joffrey’s—I just don’t find their coffee to be very good quality. For the most part, I feel the same way about Starbucks (though they have surprised me from time to time). I’ll drink Starbucks or Joffrey’s in a pinch, but if I really want a good cup of coffee, I know I need to look outside the parks.

The best coffee we’ve found on Disney property so far is at the Java Bar at the Swan hotel. Java Bar is able to source its coffee from other companies since Marriot owns the hotel, and their drinks are outstanding across the board. They also offer a range of specialty drinks including ketogenic coffee, collagen coffee, and a pretty good nitro cold brew. I’ve yet to try a drink from Java Bar that I didn’t thoroughly enjoy.

If you’re willing to go a bit further and have transportation, the Four Seasons Orlando is another great stop for a seriously great cup of coffee. Both the resort’s quick service café, Lickety Split, and the PB&G pool bar offer outstanding coffee. As a matter of fact, the pool bar alone is an amazing place to eat.

If you’re planning on making coffee in your room, you may want to take a trip outside of the Walt Disney World resort to pick up some quality coffee (if you don’t have a rental car, Uber & Lift are the most popular choice to get around). Publix, Trader Joe’s, and Sprouts Farmer’s Market are all good options both for groceries and for picking up some great coffee.

If there’s ever a place you may find yourself realizing you need sunscreen at the last minute, it’s Walt Disney World.

It’s not any big secret that Florida is hot for most of the year—the problem is that even when it doesn’t seem that hot, sunburns happen easily at Disney parks. Even as a regular visitor, I often don’t remember I need sunscreen until I’m actually stepping out of my car at the parks and feel my shoulders start searing.

You could make the argument that it’s best to get most sundries overall outside of Walt Disney World—while this is true, a surprising number of things are actually easily available within the resort. Many of the odds and ends you might need from Walgreens in a pinch are available complimentary from Disney First Aid, and if you’re a Disney resort guest, overnight items like a toothbrush, toothpaste, and comb are just a call to the front desk away. Even mosquito repellent is easy to locate in the parks, either at mosquito prevention stations or at First Aid.

Sunscreen specifically remains weirdly elusive… You can buy it at Walt Disney World, but prepare to do some searching around then pay top dollar.

Your best bet for sunscreen is to either bring it with you from home (TSA will now allow you to bring larger bottles through carry on since it’s technically for medical purposes), or to make a trip off-site to somewhere near Walt Disney World like Walmart, Target, or even Publix. In pretty much all of these cases, you will have a better range of choices and save some money compared to buying inside the parks.