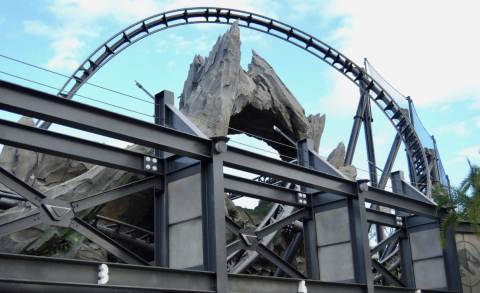 Whether you hate them or love them, roller coasters are among the best avenues to experience thrilling, hair-raising sensations that make riders scream, laugh, and--in certain cases--shiver. You might describe such sensations as weightlessness, dizziness, or roughness, depending on the experience. But what are these sensations...actually? And what does gravity have to do with them? I’m no physics professor or mechanical engineer, but my love for roller coasters has sent me on a quest to better understand what happens to our bodies when we ride coasters, from starters like Big Thunder Mountain to the harrowing Kingda-Ka.

You probably learned about g-force in elementary physics, alongside conversations of laws or motion and Newton’s apple, but you may be underestimating just how much g-force plays into the way you feel when you ride a roller coaster. G-force, the measure of gravitational force on an object, comes in three main subsections when it comes to roller coasters: negative, positive, and lateral. The best coasters in the world seemingly effortlessly blend these forces together to make for a varied and memorable ride experience, one element flowing into the next. Today we’ll be breaking down the distinctions between these three types of force: what they mean, how to recognize them, and which of your favorite rides may feature them.

Positive g-forces have the ability to be incredibly intense, and have been known to cause riders to gray- or black-out (that’s when your vision goes blurry or black completely at the end of a drop or at a roller coaster turn). To understand positive forces, and by extension, all g-forces, we must understand that the standard pull of objects toward the Earth--caused by gravity--is denoted as 1g. This is the force acting on you right now, as long as you’re not reading this while jumping out of a plane or riding SheiKra. Positive g’s make you heavier than you are, thus exerting more gravity on you than Earth’s natural gravity.

So what are some elements and coasters where you can experience positive g’s? Inversions are a great source of positive g’s. Your standard vertical loop, for example, elicits about 3g’s. One of Islands of Adventure’s flagship attractions, Incredible Hulk, pulls 4g’s throughout its seven intense inversions. Another place to find strong positive g’s is at the bottom of a first drop or hill or in helixes (an element where the coaster passes through a circular stretch of track).

Some find positive g-forces uncomfortable, even painful, but others find a thrill in the heavy, intense sensation. Take a Bolliger and Mabillard flying coaster for example, like Tatsu at Six Flags Magic Mountain or Manta at SeaWorld Orlando. The signature element of the flying coaster model is the pretzel loop. This loop slightly resembles an immelmann and sends riders diving face-down into an inversion. This element can actually be painful to certain riders, pushing a tremendous amount of gravitational pressure onto riders’ chests. Others, however, seek after this heavy sensation.

Positive g-forces feel quite empty, however, without the beautiful complement of negative g-force.

Negative g-forces are perhaps the most beloved by the masses. While positive g’s make the rider feel heavier than they are, negative g’s have the exact opposite effect, creating the sensation of weightlessness. Negative g’s more commonly referred to as airtime. This is when you rise out of your seat and feel as though you may fly out of the train. The best place to find negative g’s is at the crest of airtime hills.

Hyper coaster models are known for doing two main things: exceeding 200 feet and heavily featuring airtime. Some popular examples of hyper coasters are Mako at SeaWorld Orlando, Magnum XL-200 (a first of the model and beloved classic), and Shambhala at PortAventura Park in Spain.

A ride featuring large, drawn-out airtime hills creates a weaker and smoother weightless sensation, graciously pulling the rider from their seat. This is referred to as floater airtime. Ejector airtime, floater’s wild sibling, is caused by smaller hills and quick dips, forcefully ejecting riders out from their train seats. A ride with intense ejector moments, like Steel Vengeance at Cedar Point, can leave riders’ legs sore later in the day. Old woodies and newer Rocky Mountain Construction coasters are known for their ejector airtime. The next time you rise out of your seat, either gracefully or aggressively, remember that you’re quite literally defying gravity.