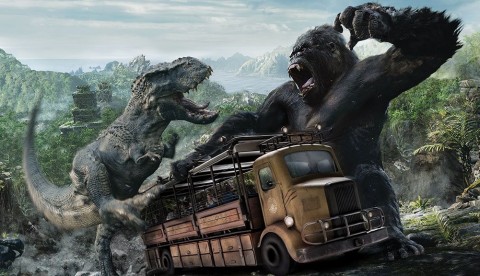 Whether you like it or not, Disney and Universal Parks have evolved. Since at least the 1990s, theme parks M.O.s have been shifting from places to “Ride the Movies” aboard Modern Marvels: Star Tours, Indiana Jones Adventure, and The Twilight Zone Tower of Terror to today’s immersive lands where you can “Live the Movies” by stepping into Hogsmeade, Pandora, Springfield, Radiator Springs, Batuu, or Avengers Campus.

Both Disney and Universal tend to be pretty picky about the films that are afforded permanent, expensive attractions inside their parks… No one wants a ride themed to a box office bomb, after all… However, just because you pick a good, revered, classic, or award-winning movie, you’re not guaranteed a good, revered, classic, or award-winning ride will come out the other end. Here’s our short collection of eight really good movies that somehow got lost in translation, turning into rides that just don’t live up to the film’s legacy.

THE GOOD MOVIE: In Hollywood’s catalogue, there’s no shortage of King Kong films, from the beloved black-and-white 1933 pre-code original to the 1976 color classic starring Jeff Bridges and Jessica Lange. Both, in their ways, inspired Kong attractions at Universal Parks, as we traced in our in-depth Lost Legends: Kongfrontation feature.

In 2005, Peter Jackson (director of the Lord of the Rings film trilogy) crafted his own, epic, three hour adaptation of King Kong, earning three Academy Awards. Jackson’s gritty and stylized take on the character painted his Skull Island home as a hideous world of giant, grisly insects, hostile natives, prehistoric beasts, and an ever-present shroud of fog and darkness. Kong’s next major appearance was 2017’s Kong: Skull Island, which advanced the story’s timeline to the tail end of the Vietnam War. The ‘70s-set film was more of a comic book “fantasy-adventure” than Jackson’s “horror-adventure,” painting a supersaturated Skull Island of vibrant colors and fantastical creatures.

THE DEPRESSING RIDE: When Universal Orlando announced the return of the King in an entirely new attraction set on Skull Island, it was anyone’s guess which interpretation they’d go with. Ultimately, the Islands of Adventure ride (wedged into a small bit Jurassic Park’s expansion pad) opted to adapt Jackson’s take on the tale, focusing not on the inherent fun and comic book style action of King Kong, but on the darkness and horror of Skull Island.

The resulting Skull Island: Reign of Kong isn’t a horrible ride, but it’s not a great one, either. It’s too dark, too grimy, and too gray to feel like a fun romp through the jungle. It doesn’t help that the ride is the umpteenth ride at the resort to read as a permutation of the Modern Marvel: The Amazing Adventures of Spider-Man, or that’s a lumbering-and-largely-screen-based simulator rather than an exciting, high-energy, off-roading adventure. It’s a shame. A well-done Kong ride through a Skull Island that’s pulpy, astounding, and fun could’ve been Universal’s answer to Disney’s Indiana Jones Adventure. Moreover, Skull Island has left many wishing Universal had just used that plot of land for a Jurassic Park Jeep Adventure as was originally intended.

2. Pirates of the Caribbean: The Legend of Jack Sparrow

THE GOOD MOVIE: Originally opened in 1967, Disneyland's Pirates of the Caribbean is often called Walt Disney’s magnum opus; it’s the pinnacle of his time; the best ride of the 1960s; the iconic combination of all the technologies and ride systems Walt and his team had developed to that point. As it happens, it was also Disney’s first substantial hit (between a lot of misses) in translating their theme park rides into movies. Pirates of the Caribbean – today, five films deep – is “the one to beat,” with Disney famously positioning a handful of its recent, franchisable family films as “the next Pirates” to no avail.

THE POINTLESS RIDE: Located in the park’s Soundstage 4 (where a previous walkthrough, “Journey into Narnia” had been), this “interactive” experience loaded guests into a cavernous shipwrecked scene brought to life through projection mapping. In an experience “guided” by the ride’s famous talking skull, gathered guests engaged in such “interactive” moments as roaring back at the Kraken to scare it away, stomping your feet to drown out mermaids’ singing, and call-and-response singing with a Musion-projected Jack Sparrow.

Clearly meant as a showcase of then-emerging texture-mapped projection technologies (which would go on to become “plusses” in many classic rides and anchor nighttime spectaculars), “The Legend of Jack Sparrow” just had no real reason to exist. It was odd that a show with dark and scary moments based on a PG-13 film franchise had to use cringey, Dora-the-Explorer-esque interaction just to have something to do other than watch, but frankly, just a normal ole show would’ve been better than the forced interactivity. This “style” of experience arguably lives on in Lightning McQueen’s Racing Academy across the park, but it’s a much more appropriate IP for the experience.

THE GOOD MOVIE: When Lilo & Stitch landed in 2002, the animated sci-fi family comedy was something Disney wasn't used to in that decade: a hit. To this day, Lilo & Stitch remains one of the few genuine, timeless, blockbuster hits Disney had between 2000 and 2010, when Atlantis, Brother Bear, Home on the Range, Treasure Planet, Chicken Little, and Meet the Robinsons saw Disney fall behind new competitors like DreamWorks and Pixar. It tells the story of a mischievous alien who crash lands in Hawaii and disguises himself as a dog, learning the meaning of ‘ohana from six-year-old Lilo.

In August 2003 – just thirteen months after Lilo & Stitch debuted in theaters! – Stitch: The Movie hit video store shelves. A month after that, Lilo & Stitch: The Series premiered on both Disney Channel and ABC Kids. Two years later, Lilo & Stitch 2: Stitch Has a Glitch went direct-to-video, and less than a year after that, Disney churned out Leroy & Stitch – yet another direct-to-video sequel made of cobbled together episodes of the TV series. For those keeping track, that’s four movies in three years!

THE "WORST" RIDE: Stitch was hot and in 2004, he got his own attraction… Yep, our in-depth Declassified Disaster: Stitch’s Great Escape feature is worth a read for any Disney World fan. Suffice it to say, the attraction is often regarded as the "worst attraction at Walt Disney World." Stitch's Great Escape was just pretty much a miss from beginning to end. Far too scary for kids and far too juvenile for teens, it was a bad overlay that picked just the wrong aspect of Stitch to highlight, and just as his meteoric rise turned to a catastrophic collapse in interest. It’s a shame that a generation of Disney World guests probably know Stitch from his failed Tomorrowland invasion rather than the genuinely-sweet movie he came from.

THE GOOD MOVIE: 2007's Ratatouille was another entry in Pixar's (almost) unending list of films to receive universal critical acclaim (and to this day remains the highest-rated Pixar film on many professional critics' lists). It tells the story of a would-be chef named Remy... who just happens to be a rat – largely, unwelcome in the unscale eateries of his Parisian home. Luckily, Remy teams up with wannabe sous chef Linguini to create masterful dishes that become the talk of the town. Fitting perfectly into Pixar's largely unbroken stream of films that defy traditional plots or narratives, Ratatouille was adored.

More telling, though, is the movie's reception in France, where it was glowingly reviewed for its adoration and appreciation of French cuisine. Unlike the highly-franchised Toy Story, Cars, Incredibles, or Monsters Inc., however, Ratatouille  didn't spawn a film series or much merchandising. Instead, the masterpiece took its place alongside Inside Out, Wall-e, Coco, Up, and A Bug's Life as "one-and-done" settled stories in the Pixar canon...

THE "MEH" RIDE: Which is why it might've seemed odd that – as part of the ongoing evolution of Epcot to be "more relevant, more timeless, more family-friendly and more Disney" – it was announced that a whole new (and very large) attraction themed to the film would open at EPCOT in 2020... thirteen years after the film! While the opening of Remy's Ratatouille Adventure was moved to 2021 due to the COVID-19 pandemic, make no mistake: the new attraction probably won't make any "Best Of" lists...

We know, we know: "Don't knock it 'till you've tried it." Well... we've tried it. Remy's Ratatouille Adventure is an exact duplicate of the Modern Marvel: Ratatouille – L'Aventure Totalement Toquée de Rémy that's sent guests scurrying around Walt Disney Studios Paris since 2014. Frankly, that's a small part of the problem. In the seven years since the ride first opened in Paris, a lot has changed, including the arrival of trackless ride technology in two actually-new Walt Disney World headliners (Rise of the Resistance and Runaway Railway). Not to mention, both Disney and Universal have figured out that guests are tired of screens.

The Ratatouille ride is a fun aside, but it's not a headliner... and it's also not a ride that'll win guests back after COVID. Look, Remy's Ratatouille Adventure probably is the right addition in Disney's quest to make Epcot "more relevant, more family-friendly, and more Disney," but if you're "hyped" for it, maybe lower your expectations a bit. There's a reason Disney's promotion for it only shows the pantry scene of oversized foods... because the rest of the ride is basically made of very large screens that will show showing early-2010s CGI animation. Consider Remy's Ratatouille Adventure to be Disney's now-outmoded take on Universal's Spider-Man, but without the motion and with screens acting less like windows and more like windshields. Just trust us: once the newness of Remy's Ratatouille Adventure has worn off, you may find yourself kinda-sorta wishing Disney had gone a different direction in honoring this really-really-good movie.

Ironically, that's true of another French-inspired Disney attraction... Read on...

Remy's ride isn't meh, it is one of the worst rides on the list. Very little could be worse then Fast & Furious but remy is dull, and lacks heart or excitement the only thing it skates by on is the goodwill of the film it wasn't even the best trackless ride at a Disney park when it opened (Pooh's Hunny Hunt at Tokyo is far superior, thank you for being one of the few sites to see that the remy ride is at best lacking and at worst rubbish.
Kong should never have been a 'fun', the original is meant to be scary, the ride should be too, is it well done? not really does it fit what a kong ride should be? yes.