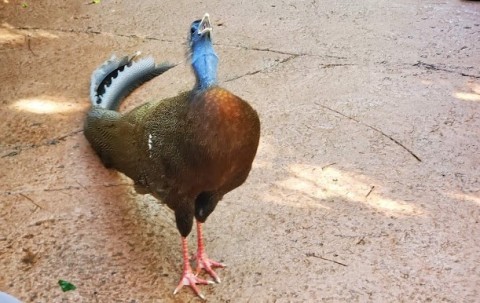 When you walk through the lush aviaries of Disney’s Animal Kingdom, you may not realize you are surrounded by superpowers…

Disney’s Animal Kingdom remains a wonder among Disney parks—more than an elaborate zoo, it is in many ways a living museum of art. From the cheerful streets of Harambe Village to the mystifying bustle of Anandapur, the park is a fantastical love letter to the richest corners of our planet and worlds beyond our own.

Few places is this dynamic of living art clearer than in the aviaries of the park’s two nature trails—the Gorilla Falls Exploration Trail in Africa and the Maharajah Jungle Trek in Asia. Both offer guests the opportunity to get stunningly close to some of the most beautiful creatures on earth, particularly in their sister bird exhibits. Inside these canopied sanctuaries, explore at a pace of your choosing. Most guests pass through these paradises far too quickly on the way to the next thrill, but bird lovers should slow down and take a seat. Stay long enough, and you might just attract the curiosity of some of the aviaries most fascinating denizens.

The birds of Disney’s Animal Kingdom are all beautiful, but some hold surprising secrets—a few of which, you may only be able to learn from the cast members who spend time with them daily...

NOTE: During the time of this writing, The Gorilla Falls Trail is under partial refurbishment, and the aviary is currently inaccessible. Cast members we spoke to expect this project to take about 6-8 weeks. The Maharajah Jungle Trek is still fully open.

It’s not entirely clear if this little beauty is still present at Africa’s Gorilla Falls Exploration Trail (he was previously noted on the bird watching guide for the Pangani Forest Exploration Trail), but this unassuming fellow holds a surprising set of pipes.

Like many birds, the male Snowy Headed Robin Chat like to sing to attract females. In passing, this song is beautiful but doesn’t necessarily stand out from the dozens of other birds around him.

That is until the little guy starts mimicking every other bird in the aviary.

The male’s song is basically one long copycat freestyle of other birds, with a little bit of his own whistling thrown in for flavor. Observers have caught them mimicking whistles, chirps, and coos from humans as well. This symphony of impressions all takes place extremely fast without breaks, resulting in a captivating melody. While his skill doesn’t necessarily match that of infamous mimickers like the lyrebird, his range is impressive.

Bonus: The aviaries at Disney’s Animal Kingdom are home other skilled mimics—particularly the Golden-Crested Mynah at the Maharajah Jungle Trek. This cousin of the starling is known for mimicking a wide range of sounds in the wild, including human voices. If you spot one, don’t expect it to strike up a conversation—mynahs in captivity don’t often utilize this ability.

2. The Nicobar Pigeon is the closest relative of the Dodo (Maharajah Jungle)

The tale of the infamous Dodo bird is a sad example why sometimes we humans can’t have nice things—these large, flightless birds met Dutch sailors on the island of Mauritius without fear and were subsequently hunted to extinction (specifically, a combination of habitat destruction and introduction of new predators sealed the dodos’ doom).

You can’t necessarily meet a dodo at Disney’s Animal Kingdom, but you can meet his closest living relative—the resplendent Nicobar Pigeon.

Ask any cast member who their favorite bird in the Maharajah Jungle Trek is and the answer may be the Nicobar Pigeon. They look like birds begging to be animated and given a charming, bookish personality—perhaps a genteel name like “Cornelius”. They’re friendly, curious, and shamelessly cute. You actually have to watch where you step inside the trail to ensure you don’t accidentally trip over one.

One trait that may surprise you is that Nicobars have something of an iron stomach—they can nosh down the hardest of nuts without hesitation thanks to their powerful gizzards which grind the shells to mush. They prefer to live in flocks and don’t mind humans during the day (though they prefer solitude at night). They also have a curious ability shared with the park’s other pigeons—they can use their beaks like a straw to suck up water straight from the source.

3. The Great Blue Turaco has a pair of really weird toes (Gorilla Falls)

Ever been stuck at a lunch table with that weird friend who can bend their fingers backwards? The Great Blue Turaco is that guy.

Turacos are gorgeous birds that come in a wide variety of colors—at Disney’s Animal Kingdom, you can meet the blue variety. Like the Nicobar Pigeon, the Great Blue Turaco fits right in at Walt Disney World with his vibrant coloring and Elvis-like crest. You would think a bird this fabulous would be a pretty good flyer.

Unfortunately, graceful flying isn’t the Turaco’s game. His round wings make him a bit awkward, only allowing him to glide from branch to branch. Turacos love fruit from high trees like plantains, which could be a problem for a fumbly flyer.

The Turaco has a secret—albeit bizarre—trick to overcome this weakness. One of his outer toes on each side can rotate all the way from the back of his foot to the front to give him a better grip while climbing or landing. It’s easy to miss this feature unless you watch closely, but this unusual adaptation gives the Turaco just enough of an edge to keep a grip on the most twisty branches.

Some time back, I wrote a piece for Theme Park Tourist that referenced the aviaries of Disney’s Animal Kingdom—in particular noting how much fun it is to watch the weaver birds at both aviaries. I was admittedly surprised when some readers pointed out that weaver birds are only found at Gorilla Falls—a strange revelation as I thought I had just seen them at the Maharajah Jungle Trek weeks before.

All weaver birds are stars at nest-building—in the wild, their nests can grow enormous, housing hundreds of birds in one enormous woven home worthy of Pier 1 Imports. You can see White-Headed Buffalo Weavers and Taveta Golden Weavers in action over at the Gorilla Falls trail as an example.

The Metallic Starlings of the Maharajah Jungle Trek, however, give the weavers a run for their money.

Starlings are known for being unusually gregarious and social birds—they have a penchant for building elaborate globular hanging nests out of anything they can find. The Metallic Starlings of Disney’s Animal Kingdom seem to be an unusually mischievous lot. During any given nesting season, you can sit back and watch individuals squabble over nesting materials, even going so far as to steal bits of grass and moss from each other’s nests. Despite operating in flocks of thousands, they don’t necessarily cooperate with each other the same way weaver birds do, and it makes for quite a show.

If you think your massive family has issues, meet the Carmine Bee Eater.

Like starlings, Carmine Bee Eaters like their families big. While their flocks don’t reach quite the size of their starling neighbors, they make up for this in tricky family dynamics.

Bee Eater families are made up of a complex dynamic of four generations connected through specific ways—everyone seems to know everyone else by voice alone, and the whole flock participates in watching over chicks. Their family structure is one of the most complex of any bird in existence. Females join the families of their monogamous mates. Bee Eaters are also master hawkers—they catch insects by launching off a perch, grabbing their prey, then landing seamlessly. As their name implies, they are particularly adept at chowing down on bees—after snatching one out of the air, they’ll whack it on a branch then rub the stinger off before dining. For such a flamboyant little fellow, that’s pretty hardcore…