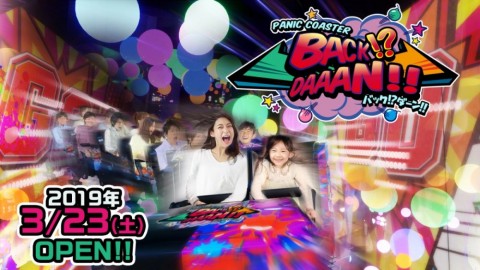 We theme park and roller coaster lovers spend a lot of time discussing the fastest, tallest, longest, coasters in the world--the Fury 325s and Steel Vengeances and Smilers. But what about the wacky coasters, the one-of-a-kind, head-scratching and hair-raising--for lack of a more eloquent phrase--WTF coasters? Today we'll be digging into just one (of many) of these oddball coasters experiences.

There's perhaps not a weirder place to start than Panic Coaster - Back Daaan, found at Tokyo Dome City in Japan. Though Tokyo Dome City is far better known for its larger attractions like Thunder Dolphin, an Intamin Mega Coaster that weaves its way in and out of the sleek buildings of Tokyo, and its first-of-its-kind centerless observation wheel, Panic Coaster is one of the park's newest attractions.

On paper, Panic Coaster is nothing special. It's a Gerstlauer family coaster (Gerstlauer, the manufacturer responsible for rides like Takabisha and the aforementioned Smiler) with a top speed of--brace yourself--about 18 miles per hour. The ride's top height? Less than 15 feet. One may find greater thrills riding the monorail between parks at Walt Disney World. But Panic Coaster has a trick up its sleeve, one that warrants a spoiler warning for the rest of this article. Even photos of this immersive and surprising coaster are hard to come by, cloaking the ride in mystery.

Panic Coaster starts off with a tire launch similar to that of the Incredible Hulk Coaster at Universal's Islands of Adventure, plunging riders into a meandering layout in complete darkness. Though not the launch nor layout are even close to intense, the loss of control does add a dose of excitement to this section of the ride.

After about a minute of curves and minor dips, the coaster comes to a stop. Projected on the walls enclosing the train is a bouncing cartoonish bomb a la Tom and Jerry. Then, tick...tick...boom. In a display of vibrant colors and jovial music, the train completes the layout again, this time not only backward, but surrounded by multicolored orbs, mirrors and light displays. Now getting a glimpse at the track they just traversed, riders eventually find their way to the station and exit the ride, now being let in on the secret of Panic Coaster.

If there were a roller coaster equivalent to a party bus, Panic Coaster at Tokyo Dome City would be it. It's no understatement to say that this is not an intense ride, but that's not a knock on the coaster, because it's not really going for intensity. Instead, Panic Coaster aims to capture a childlike sense of wonder and awe in its 800 feet of track and roughly 3 minutes of ride experience. It's as tough to critique this coaster as it is to compare it to any other coaster in the world, simply because it is tapping into something wholly unique from the rest of the coaster industry, especially as of late.

In a theme park landscape hell-bent on bigger and better, Panic Coaster - Back Daaan aims to give, children and adults alike, a break from the world, a break from reality, and a moment of beautiful panic.