3. Picked your feet up during 3D movies 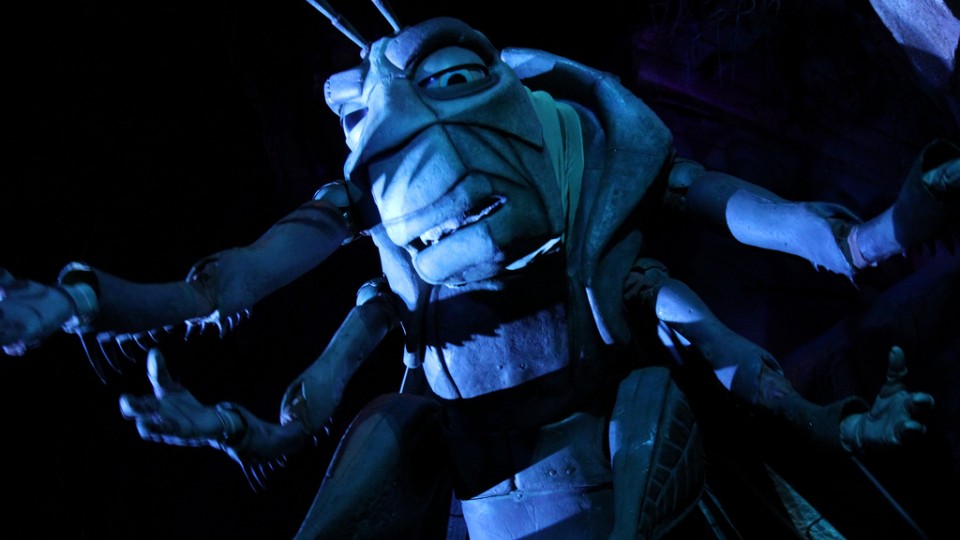 Time for a confession… I still do this as an adult.

Disney’s 3D movies were intense enough when all we had was Captain EO. That alien spider woman totally gave me the heebie-jeebies. Muppet Vision 3D was bonkers, but it wasn’t too bad on the scare scale (even when the Swedish Chef decides he has zero krumkake left to give and decides to bork-der-persky-pengwerns-WERT-DER-BOORM-BOORM!"

Everything changed when Disney introduced Honey, I Shrunk the Audience…

To this day, there are few experiences at Disney parks I hate more than the “leg tickling” effect employed on Honey, I Shrunk the Audience and It’s Tough to Be a Bug (perhaps with the exception of the even more disturbing “bee sting” effect on the latter). Sure, it was funny seeing grown-ups freak out throughout the audience, but I personally wanted no part in Disney’s creepy-crawly shenanigans.

I’ll admit that I became convinced Disney was out to get me with this effect on every other ride I tried. I learned how to watch for the cues leading up to the leg-tickling scenes, and I lifted my legs well before then, maybe even putting a sweater over them as extra protection. I found myself lifting my legs on everything from The Great Movie Ride to The Indiana Jones Adventure—anywhere that a creepy-crawly might skitter across my legs.

I remember when I reached the age that I flatly told my family, “Nope,” when they wanted to ride It’s Tough to Be a Bug. They had fun—I enjoyed the sunshine, creepy-crawly free. I’ve no regrets to this day.

4. Covered your eyes and ears during the scary parts

Disney has plenty of rides that are totally kid friendly. It’s a Small World may test the sanity of adults, but it’s not particularly scary to most kids… unless you had an intense fear of glassy-eyed, moving dolls… Okay, bad example.

Either way, there comes an age when kids start wanting to try out rides with scary parts. I remember when I gained the courage to try out attractions like Mr. Toad’s Wild Ride, The Matterhorn, Big Thunder Mountain Railroad, and The Great Movie Ride. It felt like a huge step forward to step onto these “big kid” rides, full of unexpected thrills.

That didn’t stop me from covering my eyes and ears on the parts that were just too scary.

Some moments were just too terrifying to look at directly—things like the rat eyes on Big Thunder, the Yeti on The Matterhorn, the Alien segment on The Great Movie Ride, and the hell scene on Mr. Toad’s Wild Ride (that ride was well and truly insane, by the way). The truly funny part was the way I would insist on riding these scary attractions over and over again—covering my eyes and ears was a perfectly reasonable compromise as a kid to enjoy the thrills without totally chickening out!

I was a unique girl in that I really enjoyed fight scenes and ninja stories at an early age—this was during the time when girls were expected to play with Barbies and dolls, not Teenage Mutant Ninja Turtles. I liked both—as a matter of fact, my Barbies were quite capable adventurers, even if their outfits were fabulous.

With this background in mind, it makes me wonder how many other Disney kids spent much of their trips imagining epic ninja battles everywhere they went in Disney parks.

Walt Disney World, in particular, seemed like the perfect place for a spy movie. Every bush could conceal a waiting foe, and the dark corners of rides seemed like amazing places for an epic chase. I grew particularly fond of the stretch of pathway leading from Epcot to Disney’s Beach Club as a potential location for a night-time ninja fight. Perhaps this was due to the influence of popular kids movies at the time, where malevolent evil adults could show up trying to stop do-gooder children at any point.

With the arrival of ultra-immersive lands like Star Wars: Galaxy’s Edge and The World of Pandora, I’ve no doubt this tradition has continued with kids of this generation, only with Jedi battles. I’ve seen more than one kid on Batuu engaging in make-believer lightsaber fights.

6. Tried to loosen your baby teeth in a candy apple

This one isn’t necessarily exclusive to Disney parks, but how many of us lost baby teeth to caramel or candy apples?

I sometimes wonder if modern kids understand this phenomenon. Every time I see a caramel apple these days, they keep getting more and more elaborate with layer upon layer of chocolate and other confectionaries. I remember as a kid visiting Disney parks, caramel and candy apples being pretty straightforward—an apple on a stick covered by a sticky, sweet layer of gooey goodness.

I remember hearing story upon story of other kids losing teeth to caramel apples. Needless to say, when I finally found myself at Walt Disney World with loose teeth and a caramel apple in my hand, I realized my opportunity had finally come.

I chomped mercilessly into that apple—but still that pesky loose tooth wouldn’t dislodge. To this day, I am still not sure whether I actually ever lost a baby tooth to one of these sticky sugar bombs. As a matter of fact, I have a vague memory that I may have finally just twisted one of those teeth loose and stuck it in the caramel apple, showing it to my parents to look cool. I sort of hope this was a childhood pizza dream, but if not, I guess it just falls in the category of kids do crazy things?

7. Talking to characters—the animatronic ones

Talking to characters at Disney parks isn’t particularly unusual—even adults do that. Kids, however, don’t limit conversations to costumed characters, the ones you meet for pictures and autographs. For kids, it’s perfectly acceptable to carry on conversations with animatronic characters on rides.

I have seen kids do this many times, and it’s always adorable. I’m certain I did it myself as well. My favorite story of this happening wasn’t necessarily one from my own childhood however…

My niece was about four the first time she went to Walt Disney World. We were so excited to share this early memory with her, and I remember she injected a unique flavor of magic into the trip. She reveled in her first ride on Dumbo, It’s a Small World, and Peter Pan’s Flight. Pirates of the Caribbean mostly confused her, but she still seemed to enjoy herself.

During this first visit to the Magic Kingdom, I was surprised when she insisted on wanting to try the Haunted Mansion. I thought it might be too scary for a small kid (I’m an adult and it still kind of gives me the jibbly-jeebies), but her mom was fine with it, so we had a talk with my niece about the monsters and ghosts being make-believe. I even assured her that if she got scared, she should remember that the monsters are probably more scared of her than vice versa.

We were barely a minute into the ride when I started hearing a strange sound I’d never heard on the Haunted Mansion before… a low hissing snarl, like Gollum from The Lord of the Rings.

I blinked, trying to identify the source of the noise. What in the world?

The snarl became a repeated raspy growl, and it followed us wherever we went, gurgling and growing in ferocity.

It was at that moment that I realized my niece was leaning towards an animatronic crow, baring her teeth and growling with Smeagol-like delight. She persisted in doing this to every scary animatronic she encountered through the entire ride, even lifting up her hands like little claws in warning.

At the end of the ride, she proudly declared to me that she had scared the bad birdie and all the other ghosts who tried to get too close to us. She scared them good! I don’t think she realizes how much she scared me good. Don’t mess with fierce little girls!

wait im not supposed to be doing these now?