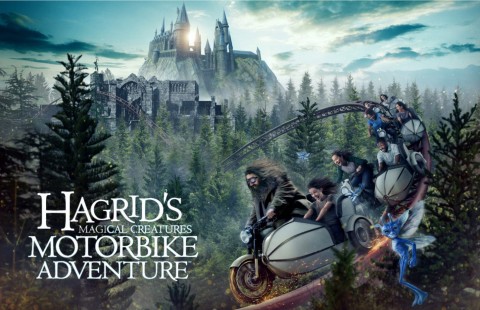 Any discussion of the greatest theme park attractions is a moving target. What’s great today may seem dated in just a few years. Then again, some attractions like Millennium Force at Cedar Point seem ageless. Only history may decide which rides have permanence and which ones are flashes in the pan. Still, it’s a fun conversation to have. Here are the best rides in the world today.

Since I can’t possibly ride everything in the world each year, I’m relying on the experts for this list. The category winners are the current champions at the Golden Ticket Awards, the industry’s acknowledged major awards. Think of the Golden Tickets as The Oscars for theme parks.

The Golden Tickets select more than 20 parks and rides that are the best in the world at a given time. The voters in these categories simultaneously keep an eye on rising contenders through some of the awards.

For example, Busch Gardens Williamsburg is the place to go to expert the Best New Water Park Ride. The Cutback Water Coaster employs revolutionary RocketBLAST® technology to deliver a smooth, powerful coaster feel through a series of water tubes. Watch the attached video to hear the uncontrollable laughter of riders. This water coaster will satisfy any theme park tourist thrill-seekers looking for a good time.

The title of Best Steel Coaster is the Holy Grail in the theme park industry. Only the greatest coasters ever designed have a shot at this award. For four years running, one of them has locked down the title as the best of the best. And that roller coaster is at Carowinds.

Fury 325’s advertising boldly but accurately describes it as the “World’s Tallest and Fastest Giga Coaster.” It soars 325 feet in the sky, which seems fantastic until you look down and realize that you’re about to drop 320 feet at 81 degrees.

While your stomach is in your throat, the coaster utilizes the gravity kick to rev up to its top speed of 95 miles per hour. And it somehow accomplishes all of this through engineering rather than technology. Fury 325 is old school, employing a chain lift hill rather than one of the modern cable lift hills and magnetic propulsion systems.

For four years straight, Fury 325 has maintained its status as the alpha of the theme park industry. It should be destination travel for any self-respecting theme park tourist.

During the summer of 2019, the company introduced Hagrid’s Magical Creatures Motorbike Adventure at Islands of Adventure. While the attraction wasn't without its technical struggles in the early days, it's received jaw-dropping acclaim. Many headlines have suggested that it's in the conversation for the greatest theme park ride ever.

The Golden Tickets voters weren't prepared to go quite that far. Instead, they named the motorbike ride as Best New Attraction Installation of 2019. And I totally understand why. The ride set is richly detailed and genuinely worthy of the Harry Potter brand.

While Hagrid narrates a disastrous motorbike ride, all of his mystical creatures are on display. Some of them are adorable, while others are…well, you'll be glad that your bike doesn't get stuck beside them. This attraction stands out as Universal's most significant achievement in theming and is well-deserving of its lofty critical acclaim.

But I’m amused that Golden Tickets categories allowed voters to hedge their bets a bit. When faced with a seemingly impossible choice between new Harry Potter and Star Wars attractions, they…voted for both.

Millennium Falcon: Smugglers Run, the pride of Star Wars: Galaxy’s Edge, wins the title of Best New Family Attraction for its novel design. On this ride, up to six guests enter the cockpit of the Millennium Falcon. Then, they embark on a heist mission for Hondo Ohnaka, an alien with questionable morals.

The best description of Smugglers Run is that it takes the concepts of Soarin', Avatar Flight of Passage, and Star Tours. Then, it mixes them all in a blender and spits out a motion simulation attraction ride of the highest quality. To an extent, it's really just a six-player, gamified version of Star Tours, yet it feels revolutionary in execution.

Knoebels Amusement Resort is legitimately the coolest place that many theme park tourists have never visited. It’s a throwback park that’s operated since 1926, and its underlying premise celebrates classic theme park rides. A trip here is so memorable that Travel Channel has recently named it as America’s Number One Amusement Park.

While many Knoebels rides are fantastic, Phoenix towers above everything else at the park. The name signifies its historic status as the first large-scale roller coaster ever moved to a different park. The Knoebels team lovingly restored this classic while simultaneously introducing modern touches.

Wow, I enjoyed reading about these top pics in various ride categories. One thing that would have made the article better would be to list the location of each park for those of us not familiar with them, just to save me a little Googling. But a very fun article nonetheless!