Ever since Universal Parks announced its forthcoming Orlando-based theme park, Epic Universe, rumors have run rampant on the kind of attractions, entertainment, and dining experiences guests will find there. To date, the company has yet to disclose any concrete plans, but with the opening likely still a few years away, they would appear to have plenty of time to get the crowds hyped in advance.

Still, it’s fun to consider the franchises and films that might be best-served with their own platform in the spacious, 750-acre property. Early speculation has pointed to an expansion of the Wizarding World of Harry Potter (this one themed to the Fantastic Beasts prequels), as well as areas featuring characters from How to Train Your Dragon, Nintendo, and several of Universal’s more well-known monster flicks. When it comes to the characters and stories that have historically had a more seasonal or temporary place at the existing Universal parks, however, there’s still plenty of room to improve. Let’s break down a few ideas. 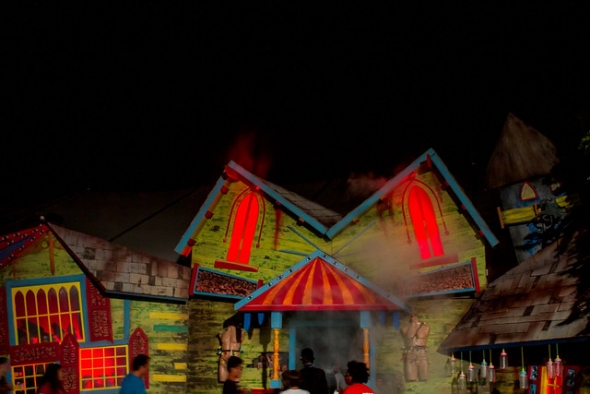 Since its inception in 1991, Universal’s annual Halloween Horror Nights has consistently raised the bar for haunted houses and horror-theme events in theme parks around the world. Using immersive detail, special effects, and hordes of ‘scareactors,’ their scare zones and mazes—based on everything from Psycho to The Purge to Stranger Things—have frightened the daylights out of casual partygoers, devoted Halloween aficionados, and well-known celebrities alike.

While HHN attractions are re-themed almost every October, their immense and unwavering popularity suggests that they could work well as permanent fixtures in Universal’s new park. It wouldn’t be the first time that Universal took this route; in July 2016, they opened The Walking Dead Attraction in Universal Studios Hollywood. The walk-through maze amplified the scariest moments in AMC’s hit show and allowed guests to get up close and personal with animatronic and scareactor ‘walkers’ as they moved through an infested hospital, prison, and warehouse.

The creativity that goes into each of Universal’s HHN mazes should not be discounted, but as with The Walking Dead Attraction, any permanent maze they construct in Epic Universe would not be restricted by the limited space and special effects of a seasonal event. And, with one of the rumored lands said to revolve around the company’s “Classic Monsters,” they might already have a perfectly-themed spot in which to situate another walkthrough.