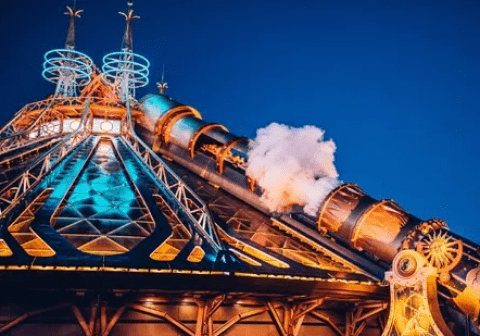 Believe it or not, half a billion people – that's 7% of the planet! – visited a major theme park in 2018. How do we know which ones they chose? That's the work of the Themed Entertainment Association (TEA) and AECOM, publishers of the 2018 Theme Index. Each year, industry enthusiasts rush to this annual report not just to see how their favorite parks stack up, but how estimates in attendance show major growth – and sometimes, major setbacks – in individual parks' performance.

Here at Theme Park Tourist, we last used the Theme Index to sort out the top 50 amusement parks on Earth back in 2014. And boy have things changed... So today, we'll revisit our list by including not only 2018's estimated attendance for each of the top 50 parks, but what that attendance was estimated at back in 2014 and the percentage change since then... A telling number for many reasons.

That said, note that the attendance estimates made by the TEA/AECOM report are just that – educated guesses – since most operators don't release per-park figures. In fact, some operators have gone so far as to outright denounce TEA's estimates as "wrong across the board." One other thing: a growing collection of otherwise-nondescript Chinese parks hovering around 3,000,000 visitors per year would've monopolized many of the first 15 slots on this list! As a result, we've combined like parks and omitted others that – frankly – don't have history or notable rides quite yet. We'll explore why that is later on... 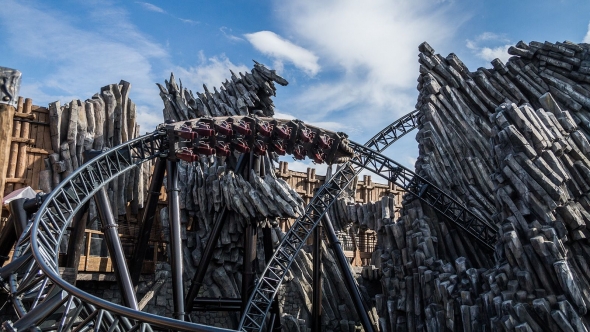 Phantasialand is a captivating German theme park that masterfully blends thrilling rides into spectacularly themed lands themed to Mexico, China, Africa, Germany, and more. For many industry fans, it's instantly recognizable as the park housing Black Mamba (a B&M inverted coaster diving through subterranean tunnels in an ancient Timbuktu), Chiapas (an elaborate, Mexican-set flume), and the flaming Talocan top-spin that spirals riders over fire and water effects.

Don't miss: Newest is the Old Norse-themed Klugheim land housing Taron, a multi-launch thrill ride that coaster fans are drooling over. The coaster soars through craggy, crystalized rock formations, intertwining with the junior boomerang coaster, Raik, to create a kinetic and convoluted land of mystery.

Opened in 2002 and originally managed by Six Flags, the then-called Warner Bros. Movie World looked like many Six Flags parks in the era: lightly dressed with DC super heroes and Loony Toons, but otherwise known for its thrill rides like the Superman: La Atracción de Acero flying coaster or Batman: La Fuga inverted coaster. Though Six Flags sold its European park to Time Warner in 2004, the park has continued on as a thrilling and lightly-themed park located in Madrid. 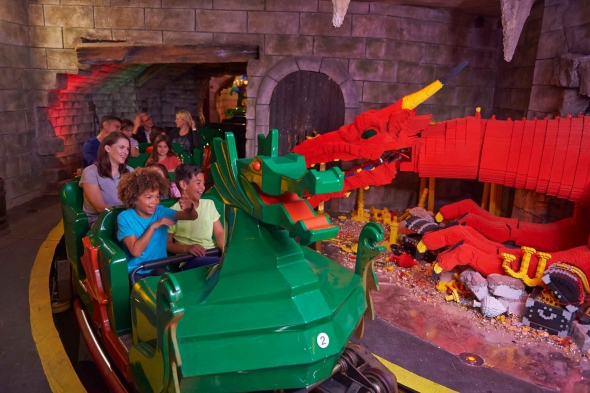 Opened in 1996 from the leftover remains of the Windsor Safari Park (which was closed in 1992), LEGOLAND Windsor is the second LEGOLAND branded park (after the original in Denmark dating to 1968!). Interestingly, LEGOLAND parks aren't owned by The Lego Group, but rather by Merlin Entertainments, the U.K. entertainment company who also owns Madame Toussaud's Wax Museums, SeaLife Aquariums, the "Eye" Ferris wheels, and prominent U.K. parks. That said, in 2019 it was announced that a consortium led by the family who does own Lego had set out to purchase Merlin Entertainments in its entirety, which just may change the theme park landscape for good!

It should be noted that both Denmark and Germany's LEGOLAND parks come in with 2,225,000 visitors each in 2018, so we'll squeeze them in here, too! 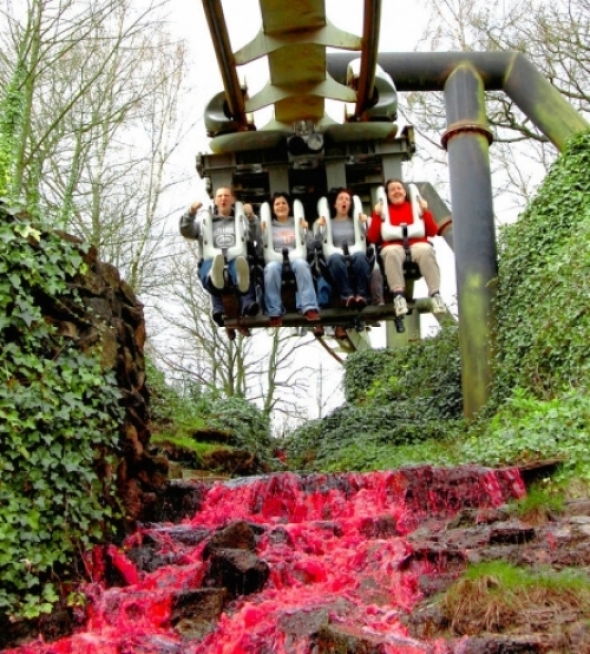 Alton Towers is a uniquely-British theme park centered around the actual remains of a historic estate and manor. Though the park's modern story as a theme park begins just over 30 years ago, it's developed an international appeal for its cutting edge thrill rides and cleverly innovative prototype coasters mixed among darkly-themed lands. The park's recent setback in attendance is no doubt due to an unfortunate accident aboard the 14-inversion Smiler coaster that cost the park quite a bit of good will among visitors. It'll be interesting to see what the future holds if indeed the Lego Group aquires Merlin Entertainments, and Alton Towers with it.

Don't miss: The park's most iconic attraction has to be 1994's Nemesis, a B&M inverted coaster that stays low to the ground, tearing over rivers of blood and coiling around the giant, petrified exoskeleton of an insectoid alien half-buried in the post-apolocyptic Forbidden Valley land. 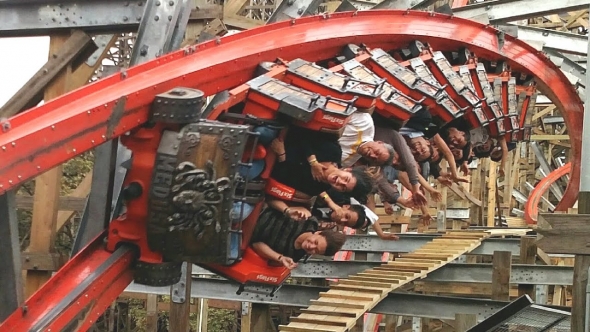 Even in Mexico, Six Flags has cornered the thrill ride market. The country's leading park located in Mexico City has the standards you'd expect, like the indoor Dark Knight Coaster, a Bugs Bunny themed kids' area, the much-celebrated Justice League: Battle for Metropolis shooting dark ride, and the other coasters and thrills that feel essential at any Six Flags – an inverted Vekoma SLC, a suspended Batman ride, etc.

Don't miss: Medusa – a wooden roller coaster added in 2000 to celebrate the parks adoption into the Six Flags brand – wasn't looking so hot by 2013. Luckily, Six Flags brought in now-celebrated partners Rocky Mountain Construction (RMC) to rebuilt Medusa in their steel I-box track, creating one of the most extreme and wild roller coasters on the continent. 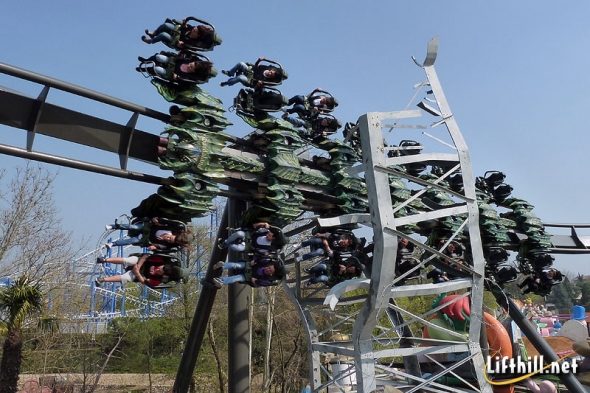 Another Merlin park, Gardaland is the preeminent thrill ride park in Italy, featuring some classic coasters, some modern coasters, and the supremely unusual interactive dark ride Ramses: il Risveglio, which appears to insinuate that ancient Egyptian statues have cyborgs within.

Don't miss: The park's signature ride has to be Raptor, the first of B&M's now-well-known wing coasters (positioning riders out from either side of the coaster body with nothing above or below), and precedent-setting example of how those ultra-wide, nimble wing coasters should soar through near-misses that leave riders – and onlookers! – gasping. Raptor effortlessly twists through shredded metal observation towers, narrowly misses steaming pipes, and even coasts sideways through a tree ripped in half. 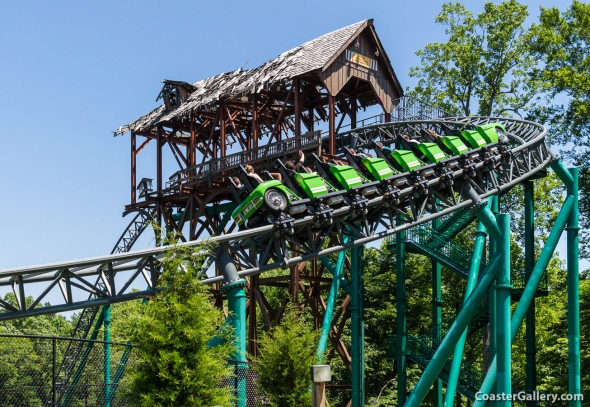 Voted the "World's Most Beautiful Theme Park" for going on three continuous decades, Busch Gardens Williamsburg gets an leg up on its peers thanks to its location along the beautiful, densely-forested hills of Virginia. There, it manages a careful balance between thrills and theme, with beautifully-crafted lands themed to European villages where dining and entertainment are as big a draw as any ride. Those rides are largely centered on the myths and legends of "the Old Country," including a "quality over quantity" collection of coasters where touches of story and a lovely setting make each among the best of its type. What we love is how the park's coaster-naming conventions make the rides feel like a set, each perfectly named for the "country" it resides in: Tempesto, Verbolten, Pantheon, Invadr, Griffon, Alpengeist...

Don't miss: Despite technically qualifying as a family coaster, the sensational Verbolten is a multi-launch "story coaster" that sends guests spiraling through the Black Forest, diving through branches, twisting in the dark, and ultimately facing one of three randomized show sequences: an encounter with the spirit of the forest, a thunder storm, or being surrounded by a pack of wolves. All three lead to the ride's signature feat: a freefall drop track plummeting the whole train 16 feet to the forest floor below before a final launch blasts riders out of the forest and to the decaying old covered bridge high above the park's Rhine River... 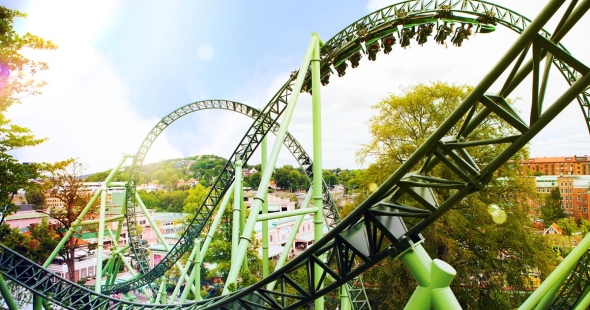 Sweden's Liseberg is a historic 1923 amusement park catapulted onto today's scene thanks to a number of superb and extreme coasters. The first must be 2003's Balder, a wooden roller coaster produced by Intamin using its unique and revered prefabricated plug-and-play track. Rather than being cut and assembled on-site, the ride's wooden pieces are laser-cut and fit together like LEGO bricks, creating an ultra-smooth ride capable of things you wouldn't expect on a wooden ride. 2018's Valkyria is one of B&M's 90-degree dive coasters, which should help stabilize the park's attendance.

Don't miss: Helix, built in 2014, is the park's signature coaster: a terrain-hugging coaster that launches and leaps along a hillside, twisting and weaving in a seemingly endless, nearly-mile-long course including seven inversions. It's an iconic and world-class thrill you might not expect in Sweden! 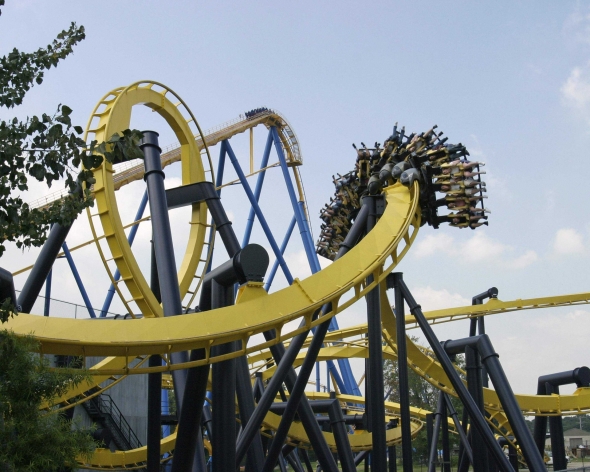 Six Flags' park outside of Chicago is relatively new to the top 50. The park is known as one of the better properties in Six Flags' thrill-packed portfolio, and its impressive 15-coaster lineup sort of offers a little bit of everything! There's the soaring B&M hypercoaster Raging Bull with its floating airtime hills, the double-spiked Vertical Velocity impulse coaster, the X-Flight acrobatic wing coaster (like Raptor, spiraling through obstacles with ease), the 4D free-fly Joker, the indoor Dark Knight Coaster, and even the ultra-classic Whizzer!

Don't miss: It has to be Batman: The Ride. The first of the now-famous B&M inverted coasters, Batman has been often duplicated at Six Flags parks and beyond, with 12 identical clones across the world. Batman is still revered, however, for its awesome forcefulness – a feature B&M downplayed on later installations – whipping through loops and racing through five inversions with incredible intensity. 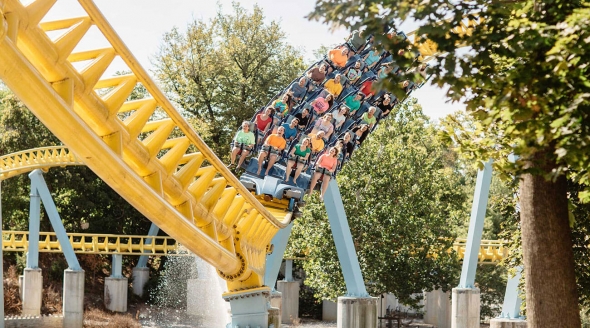 The "sweetest" theme park on Earth is Hersheypark, located in Milton Hershey's old company town of Hershey, Pennsylvania. The theme park itself is surprisingly chocolate-free, with 13 (going on 14) coasters and relatively few references to Kisses, Reese's Cups, or Twizzlers... Instead, the park reads like a good, classic amusement park with a substantial thrill collection, including three classic wooden coasters (the oldest from 1946) and some modern surprises, like Intamin's vertical lift Fahrenheit and launched Storm Runner, the madhouse wild mouse Laff Trakk, or the river-riding B&M invert Great Bear.

Don't miss: While the park's 2019 addition, the B&M hypercoaster Candymonium, will likely be a favorite, right now the winner has to be Intamin's Skyrush, a maybe-accidentally-too-intense 200-foot tall, mega-lite-esque heartpounding ride that fans adore.