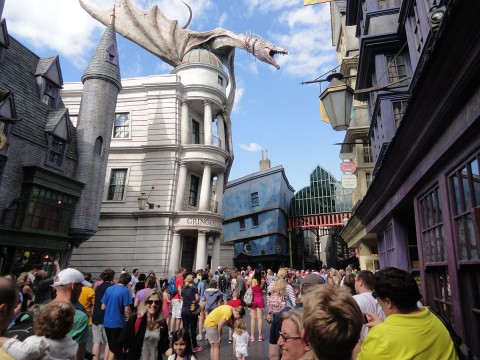 I don’t want to give away any massive spoilers or anything, but Harry Potter fans will love these results. I tallied five different reviews of the best attractions at both Universal parks in Orlando. I even included the Theme Park Tourist Top 100 as one of the metrics. One aspect became quite clear. The rides at the Wizarding World of Harry Potter are universally beloved. Harry Potter rides comprise a full third of this list including a couple of spots in the top five.

For my money, Hogwarts Express got undersold a bit by critics. I would rank it above one of the rides with Harry Potter in the title and certainly place it ahead of several other selections on this list. Unfortunately, the train at 9 ¾ suffers a strange voting fate. It appeared as a suggestion from most critics, just not a high one.

I'm a bit mystified by this, as I feel it's legitimately the best ride at Universal in terms of pure theming. It possesses a magnificent amount of immersion, as you'll honestly believe that you've encountered Dementors and other creatures from the book/movie franchise. Hogwarts Express is like the monorail, only with an exceptional Harry Potter tie-in.

X-coasters feature one of the weirdest designs of all roller coasters. The seats rest side-by-side in a sitting position, but they’re more upright than standard coasters. They’re also capable of different harness styles due to their positioning. And that brings us to Hollywood Rip Ride Rockit, a ride that has ripped up my groin on multiple occasions. Its harness is guaranteed to crotch tall men and short women, kind of an impressive achievement when you think about it.

Critics love the power of this roller coaster, and they're huge fans of its own track style, too. When you board Hollywood Rip Ride Rockit, you'll go straight up before sloping downward, sometimes at a 90-degree angle. You'll make a full 360-degree loop during the ride, as well. It's a remarkable amount of excitement that occurs in a modest 97 seconds. The ride generously lets you pick the tunes, too. It's certainly an experience, even if it is a bit uncomfortable for some.