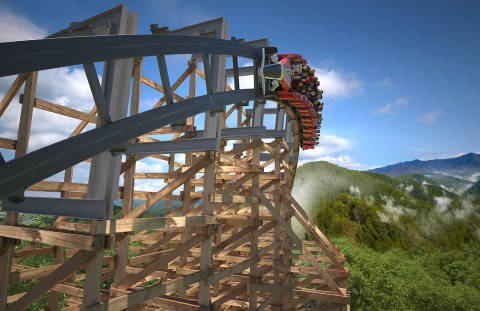 Of course, the advent of the modern steel coaster (Disneyland's Matterhorn, by the way) redefined what roller coasters could be, do, and feel like and ushered in the half-century leading unto today: an era of super-fast, super-smooth steel giants capable of unthinkable acrobatics, lightning-fast launches, and gravity-defying inversions that have changed the industry.

But don't count wooden coasters out. From the dominant thrills on the planet to rough, niche artifacts of a bygone era, wooden roller coasters are now entering a resurgence of their own.

As we enter a new era of what "woodies" can do, let's trace a century-long timeline to explore nine of the wildest wooden rollers of yesterday, today, and tomorrow. Would you tackle these wooden behemoths?

Note: We'll include an embedded on-ride, point-of-view video for each coaster. You'll notice that each is recorded via a camera mounted to the train and approved by the park. It's dangerous and often unlawful to record a roller coaster using a hand-held camera or phone. Don't do it. Basically any ride you'd ever care to record was already filmed professionally and is posted on YouTube. 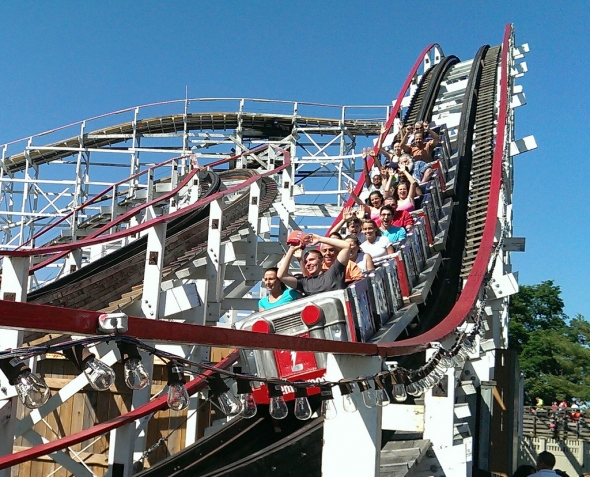 Kennywood – located just outside of Pittsburg – is a true American classic. Not only does the park feature the world's oldest operating dark ride (dating to 1901), it offers three classic coasters dating to the 1920s. Though not the oldest of the three, Thunderbolt is perhaps the wildest. Though it opened in 1927 as the Pippin, the ride was majorly expanded in 1968 and reopened as the Thunderbolt.

Kennywood itself is built on steep ravines and cliffs over the Monongahela River, as used expertly by the park's starring modern coaster, Phantom's Revenge (which features a 160 foot lift hill, but a second drop of 228 feet, diving over the cliff's edge). There along that same drop-off rests the Thunderbolt's station... evidence of its near century of service, the ride features no gates in the station, and even still uses a manual brake for the station attendant to slow and release the train.

And perhaps the most stunning moment of the ride is its intro, as the train slowly inches its way out of the station... and over the cliff. The Thunderbolt drops 50 feet into the ravine, then circles back to solid ground for the second half (placing the lift hill halfway through the ride) where it dives and helixes before going over the cliff again for its largest drop – 90 feet. Thunderbolt is truly a thundering classic and a Kennywood staple. 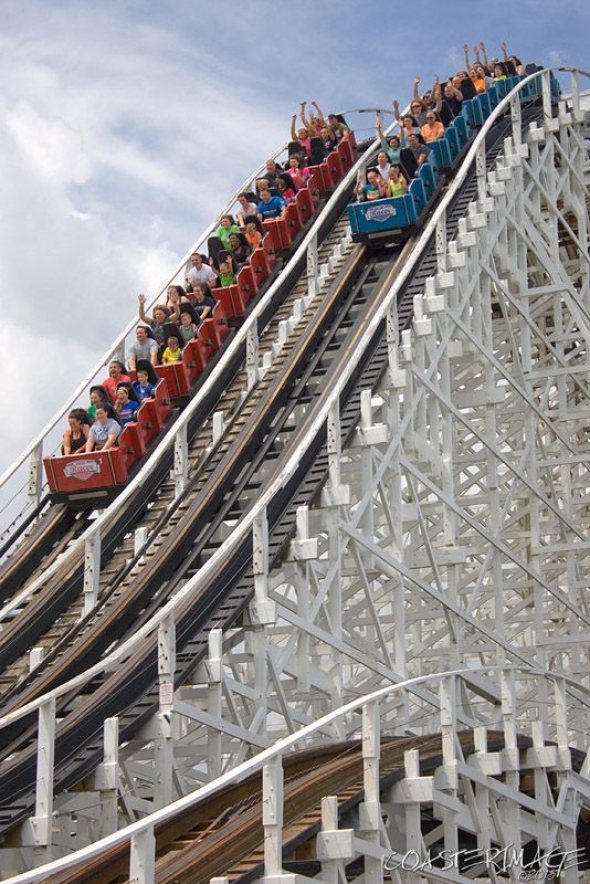 Any look at legendary wooden roller coasters has to include The Racer, opened alongside Kings Island in 1972. That's because, in the decades before Kings Island's opening, the allure of the roller coaster had more or less come to an end. The World Wars had stalled amusements in the first half of the 20th century, with a gradual renaissance through the '60s. But the Racer – the tallest and fastest roller coaster ever at the time of its opening – is credited by the American Coaster Enthusiasts as a Coaster Landmark for kicking off the Second Golden Age of the Roller Coaster.

The ultra-classic, twin-tracked out-and-back ride coasts along the park's Coney Mall (a midway dedicated to Cincinnatti's Coney Island, which the new park replaced). In 1982, the red and blue sides instead became "forwards" and "backwards" – the first racing roller coaster to ever have one of its tracks run backwards. The ride was put in forward motion again in 2007.

Even still, the Racer's biggest claim to fame may be that it was the site of an on-location episode shoot of The Brady Bunch in 1973. That episode – "The Cincinnatti Kids" – famously featured the blended family riding the Racer together. Believe it or not, though, the Bradys weren't the first famous family to ride the Racer for TV. The Bradys' competitors, The Patridge Family, filmed their own Kings Island episode – "I Left My Heart in Cincinnatti" – during the park's opening year in 1972. 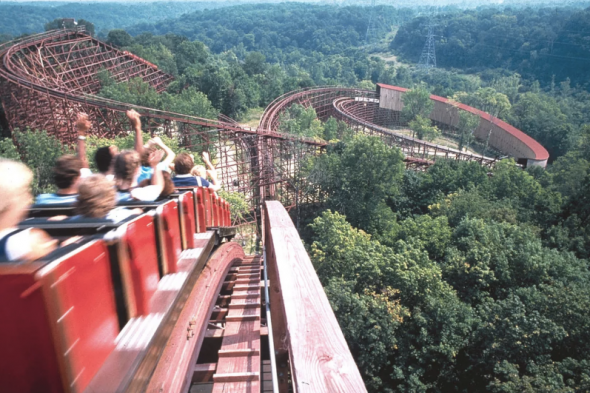 Perhaps the most legendary wooden roller coaster of all time, The Beast at Kings Island lives up to its name. Set on the outskirts of the park's Rivertown settlement, the ride's station is an old, decaying mill on the edge of the forest where bloodied signs warn of sightings of a nondescript "Beast." Fittingly, the ride is perhaps best known for how little is known about it...! Though its 110 foot tall lift hill can be seen from certain angles inside of the park, the rest of the ride's course is buried below the tree line of the dense Ohio hillsides that the ride calls home. The Beast rumbles along at ground-level, darting in and out of tunnels and banking along hillsides in a one-of-a-kind ride experience spread over 35 acres, roaring through the landscape at speeds up to 65 miles per hour.

The Beast is especially renowned for its legendary night rides, where trains are dispatched one-by-one, leaving the warm lights of Rivertown behind and entering the forest where – without a single light in sight – the ride howls through the dark woods with nothing but moonlight as a guide. The ride's equally-astounding finale is a 540° enclosed helix accessed by way of a seemingly-innocuous, gradually-tilting drop that's absolutely mind-blowing.

Celebrating its 40th birthday next year, the Beast is still the longest wooden roller coaster on Earth at 7,359 feet long – nearly a mile and a half, with a 4:30 second ride time.

And we can't forget about its sequel (opened when the park was the more cinematic Paramount's Kings Island). That Lost Legend: Son of Beast, was the world's tallest, fastest, steepest, and only looping wooden roller coaster when it opened in 2000. Of course, the ride is a Lost Legend for a reason... if only Paramount had held out another year, they would've seen the complete revolution of wooden roller coasters... And our next entry is the perfect example... Read on...