5 of the Weirdest Disney Attractions to Have Ever Existed 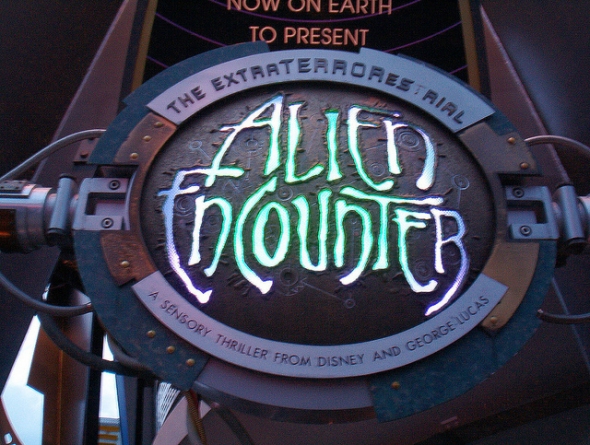 Tomorrowland’s Extra TERRORestrial Alien Encounter was an attraction like none Disney had ever attempted before—and indeed, would never replicate since. The ride’s history is a fascinating read, but here’s the short version. In an attempt to lure thrill-seekers and teens to Magic Kingdom, Disney set out to design a horror attraction called “Nostromo” based on Ridley Scott’s Alien. While the deal to use the Alien brand fell through (the R-rated film was deemed too intense for a Magic Kingdom ride), the influence of the series remained. Indeed, replace the ride’s malevolent “X-S Tech” corporation with Weyland-Yutani and turn the alien into a xenomorph, and you would have had the Nostromo attraction that never came to be.

Without the Alien brand attachment, several of the ride elements stood out as odd. Indeed, the ride summary might strain credulity for some of today’s readers.

The premise was that visitors played the part of guests given the privilege to watch an experiment in interspace teleportation put on by the ubiquitously slimy X-S Tech. The ride started off on a weird note with a pre-show that involved a Tim-Curry-bot named S.I.R vaporizing a cooing, cuddly alien named Skippy during a demonstration-gone-wrong. This was apparently done on purpose to weed out visitors with less-than-stalwart courage. It worked-- as a kid, the pre-show sent me bolting out the exit doors.

The main ride involved being strapped to a chair in a round chamber surrounding a giant teleportation tube. The seat harnesses were roller-coaster style rigs, so unless you “hacked” the ride by leaning forward a little when they lowered, you were well and truly lashed in place for the show to come. As expected, the teleportation experiment goes horribly awry, and instead of beaming in the X-S Tech Corporate Overlord himself, they instead teleport a massive alien into the room. The alien itself looked a bit like a Dungeons and Dragons monster, but this was difficult to notice in the dark with fog blasting through the room. The lackeys scramble to try to fix the issue before the alien can escape.

Then the lights go out.

Just take a moment to listen to the audience from 5:22 on…

The rest of the attraction was entirely sensory. Strapped to the chairs, audiences had nowhere to run as the alien thumped unseen through the room. This was terrifying enough, but things got truly gnarly when you felt the alien pause behind you, dribble slobber on your arms, breathe on your neck, and finally—yes, this was real—flicker its tongue across your head.

Yes, youngins, Disney once had a ride where—after watching Stitch’s predecessor get disintegrated-- we voluntarily allowed ourselves to be lashed into a chair in the dark while something breathed on our necks, slobbered on us, and licked our heads. It was a different time… 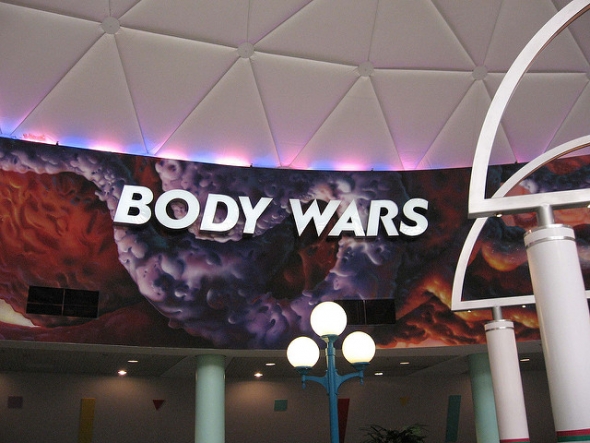 We’ve talked about Body Wars previously in our Lost Legends series. For those unfamiliar with this Epcot classic (which used to be part of the Wonders of Life pavilion), the best way to describe it is Star Tours inside the human body.

What could possibly go wrong?

I have a hard time picking on Body Wars because I actually liked this attraction as a kid. I couldn’t figure out why my family didn’t want to ride it again and again (or ever). Apparently, it was because a jostling ride through blood vessels, fat layers, capillaries, the brain, and the lungs was just a bit too much for the digestive tract of most visitors. Indeed, other than Mission: Space, there is probably no attraction that has held a more notorious record for “Code V” protein spills.

The premise of Body Wars made sense for Wonders of Life. Unfortunately, in the creators’ zeal for realism, the combination of navigating through giant landscapes of human viscera while being sloshed back and forth like a toy boat in a toddler’s bathtub proved a recipe for stomach-splitting nausea. It felt a bit like being flailed around while viewing sweeping footage of a colonoscopy (fortunately, Disney spared us a jaunt into that particular region).

The ride suffered frequent bugs which exacerbated the motion sickness issue, and they even had to cut a short segment featuring a trip through the lungs. Even had Wonders of Life not met its doom, it’s possible Body Wars still might have failed to weather the passage of time.