Could This be 2017's Most Exciting New Theme Park Ride? 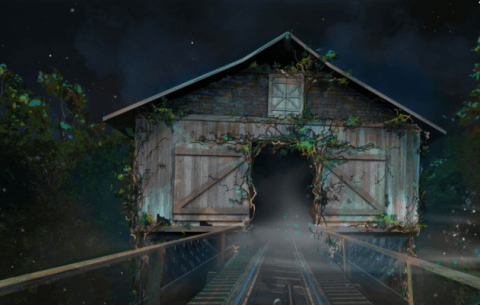 For most of its 45-year life, Kings Island has been a park in transition, passing from owner to owner along with its sister parks: Kings Dominion, Carowinds, Great America, and Canada’s Wonderland. Every owner who's touched Kings Island had left their mark – the Coney Island classics and Hanna-Barbera history left by Taft Broadcasting, the modern thrills of the Kings Entertainment Company, the cinematic stories and themes from Paramount Pictures, the cheap and cheerful movie tie-ins from CBS, and now the towering steel thrill rides so evident of Cedar Fair.

Finally, in 2017, Kings Island will become home to a stunning new roller coaster that will serve to bridge the gaps. In 2017, a new wooden coaster will take the cumulative lessons learned from Kings Island’s past to create a ride that should be perfect for thrill-seekers, storytellers, families, and everyone in between.

Mystic Timbers is poised to be Kings Island’s best new ride in years. The mysterious new wooden roller coaster will race through the dense forests prowled by the Beast with as much atmosphere and storytelling as the park's ever offered. Mystic Timbers will stand among the park's legendary line-up, and we've got the details to prove it. 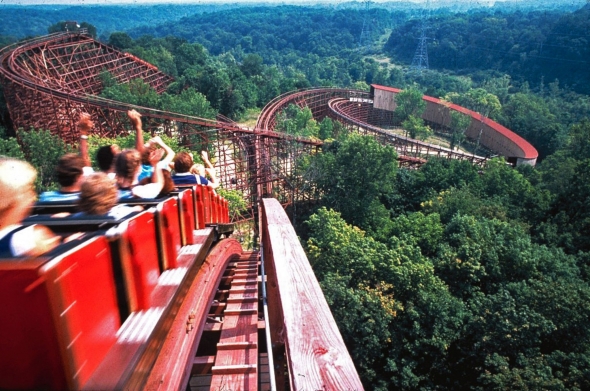 It’s worth noting that Kings Island is a park renowned the world over for its wooden coaster collection. The park’s opening day Racer is credited within the coaster community as a legend, credited with kicking off the Second Golden Age of the Roller Coaster after decades of idling interest and waning innovation. The two racing rides dart side-by-side along mirrored out-and-back layouts down the length of the park’s historic Coney Mall.

The next legendary wooden coaster at the park has to be The Beast. Opened in 1979, the Beast is a custom-terrain following roller coaster that literally roars through nearly 40-acres of untamed forest. A mile and a half long with a ride time topping four minutes, The Beast is still the longest wooden roller coaster on Earth more than 35 years later, and is known the world over for its night rides when the coaster rockets through the dense woods of Ohio without a single lightbulb in sight. 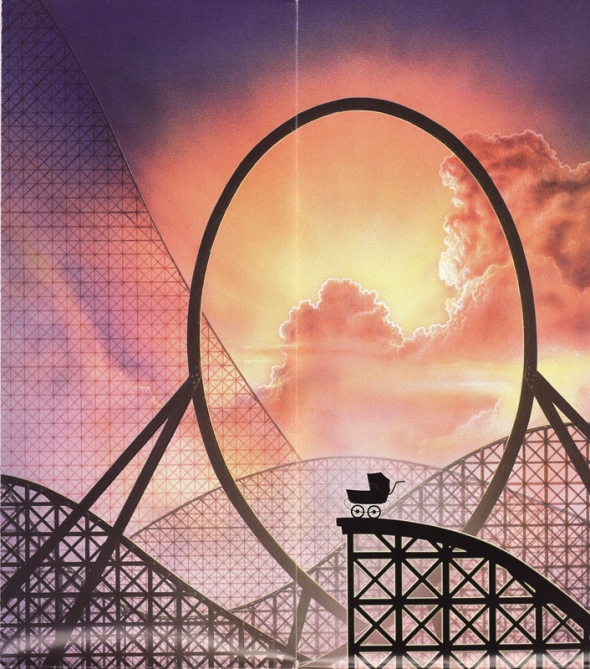 To be fair, Paramount’s ill-fated sequel – 2000’s Son of Beast – fared substantially worse. The $30+ million ride – the tallest, fastest, second-longest, and only looping wooden roller coaster in the world – crashed and burned in a tragic but blazing tale that we chronicled in its own in-depth Lost Legends: Son of Beast feature.

So when construction walls appeared on the edge of the park's forests this spring and signed warned, "CAUTION: Falling Trees," rumors of a new wooden roller coaster spread like wildfire. The return of a wooden roller coaster to Kings Island is a brave choice, with two world-famous (and one world-infamous) sisters to contend with. So how will Kings Island make Mystic Timbers stand out among a legendary lineup?

Simple: by not trying to compete.

Nature is taking over

Imagine it… as you step through the park’s Rivertown – themed to an early Ohio settlement along the forested Ohio River – you’ll see a set of barns looming ahead. This, according to a new overarching story applied to the land, is the Miami River Lumber Company, an early arrival in the still-new railroad town.

But as you grow closer and closer to this lumber operation, you’ll begin to notice something is afoot.

Deep, bramble vines are growing across the face of the Miami River Lumber Company’s barns. These sinister vines seem to be crawling across the landscape as if they’re consuming Rivertown. These serpant-like vines are slowly reclaiming the town, and it’s up to you to figure out the source of their unnatural growth.

The wooden roller coaster – manufactured by fan-favorite Great Coasters International (GCI) – will crest a 109-foot-tall lift hill and course through 3,265 feet of wooden track at a maximum speed of 53 miles per hour. Like so many of GCI’s coasters, Mystic Timbers will weave and slalom through the forest, racing along ravines, leaping over the park’s deeply-wooded White Water Canyon raft ride, and twice soar over a waterway before barreling back into the woods. Altogether, the ride will feature 16 airtime hills as it curves and jumps, never burning off its speed until the very finale. 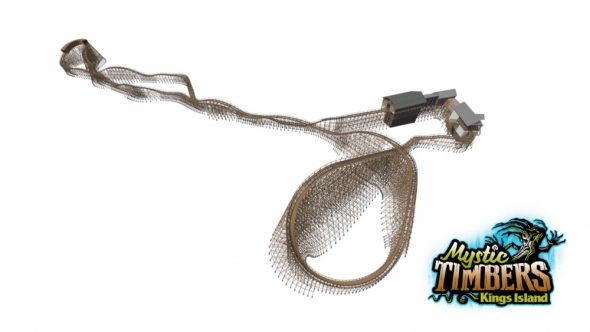 The low-to-the-ground thrill ride will be a wonder as it takes the lessons learned from both the Racer and the Beast, adds of dash of cinematic storytelling, and turns this otherwise simple roller coaster into a true adventure. It’ll borrow from the Beast in another way, too: it promises out-of-this-world night rides as it races through the uncharted forest, its track tucked down below the treeline. 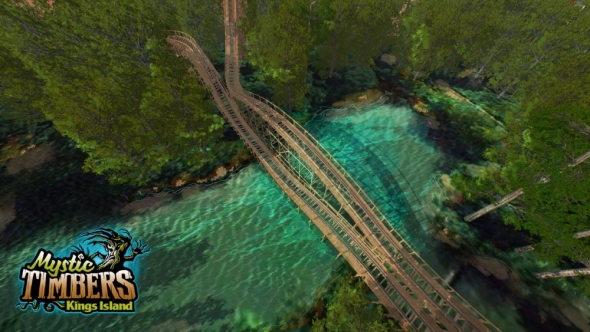 But while the Beast surges through pitch-black darkness, we’re actually hoping for something different here: we hope that Kings Island looks closely at the artwork they’ve teased (see "Nature is Taking Over," above) and mimics the “enchanted forest” feel. This supernaturally-charged ride ought to be barreling through mist with glowing, mysterious orbs of dust suspended throughout the trees. It should feel ethereal, perhaps with these "magical" elements growing increasingly stronger and more visible as you near the "source" of the vines.

Simple details like that would make for a wonderful, enchanting, seriously cool night ride that no other park on Earth has – a dizzying forest alight with supernatural glow. (They're also what was missing from 2014's inverted Banshee, which should've been diving through tunnels, racing through the forest, and tempting near-misses with gravestones through its course instead of simply flipping in an open field as it does.) 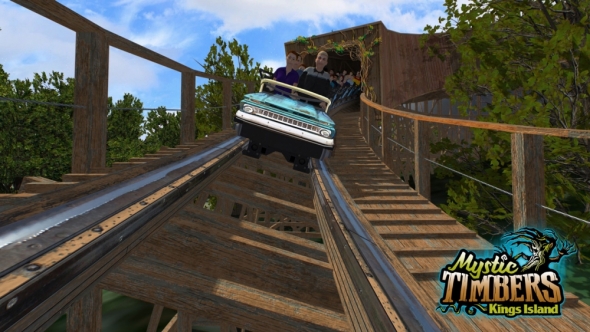 The ride is also expected to feature GCI's well-known Millennium Flyer trains, modeled here after rusted-out trucks. But what has fans bursting at the seams about this new coaster, though, is more than just its impressive stats, its enviable trains, or its return to storytelling.

The point-of-view video that Kings Island has released doesn’t tell the whole story. Instead, it stops just short of a menacing barn at the end of the ride’s course. With the sinister vines creeping out of its black entry, this shed contains something that’s got fans stirred into a frenzy. 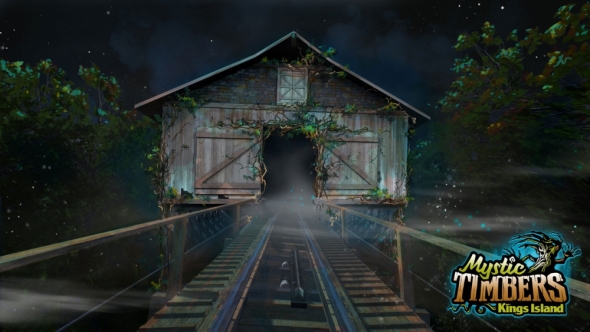 The hashtag #WhatsInTheShed is tracking speculation, but one thing’s for sure: Kings Island has made it clear that we won’t know until our first rides next spring. And just like that, a simple wooden roller coaster becomes more. With a little story and a simple cliffhanger, we’re clamoring to find out more and Mystic Timbers becomes a must-ride for 2017.

This coaster is not going to be all it could have been. They could have, and SHOULD have, had more steeply banked curves. As it is, at least as it appears in the video, the curves are nothing special. I think this will be a huge yawn compared to other GCI's that have been built.

So... Won't it have three sisters? The Adventure express has always been my favorite ride in the park! :)