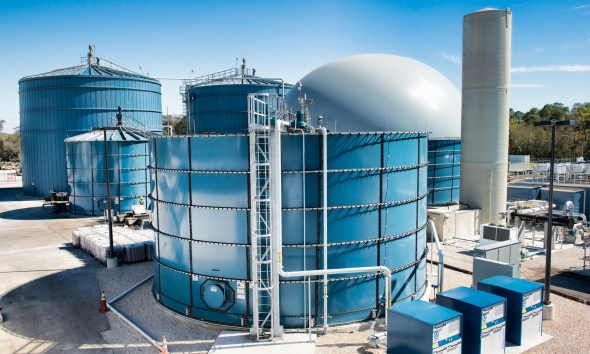 That’s the liquid waste dealt with, in a very efficient fashion. But there’s still a mountain of treated poo and other solids to deal with. It’s here that things begin to get really clever, with the 2013 addition of the Central Florida Energy Garden by startup Harvest Power close to the waste water treatment plant.

The $30 million Energy Garden welcomes 100 tons (eight to 10 truckloads’ worth) of food waste brought from the resort’s kitchens (as well as off-site businesses) every single day. This is pushed through screens with half-inch holes to filter out foreign objects (such as plastic and silverware). A minimal amount of water is then added to create a slurry, which is then pumped into a mixing tank and blended with “biosolids” (that’s the treated poo), heated and fed into an anaerobic digester. This consists of two massive domed tanks, which emulate the processes of a cow’s stomach. 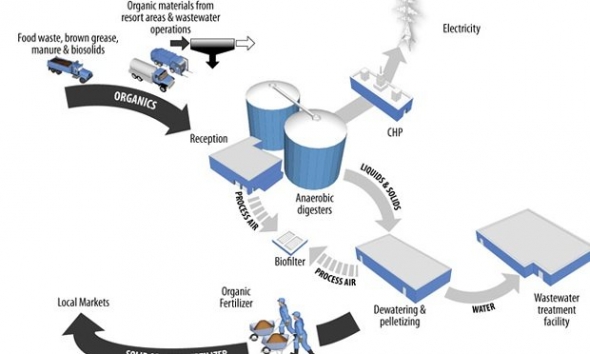 The digesters consume a blend of 20% food waste, 20% fats, oils and grease and 60% biosolids. This sits in the digester tanks for 26 to 28 days, before being stored in a post-digester tank. A biogas holder is mounted to the top of this tank to collect, store and regulate the pressure of biogas – one of the most important outputs of the process. The biogas is fed into locomotive-sized generators, where it is burnt to produce electricity. Enough power is produced to power 3,000 homes for a year. This is only a fraction of Walt Disney World’s energy needs, but it is enough to completely power the Energy Garden itself, as well as the waste water treatment plant – making the facility totally “off-grid”.

Currently, all of the biogas is fed into the generator and the electricity is all purchased by Reedy Creek for use at Walt Disney World. However, Harvest Power is also investigating the possibility of using the biogas to power the resort’s bus fleet. 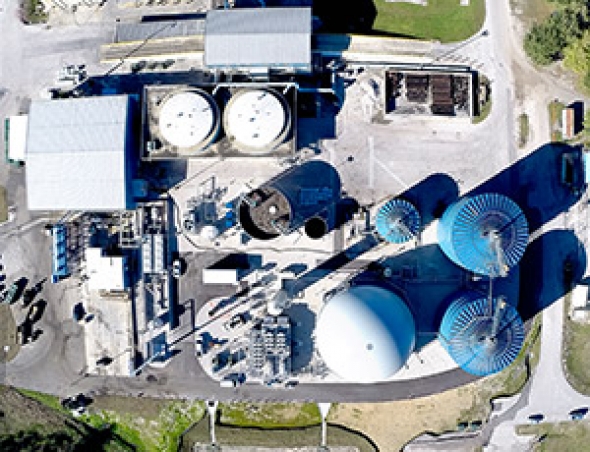 The “digestate” (the remaining effluent) from the post-digester is separated into a solid and liquid stream using a centrifuge. The “cake” of solids is dried to create around 6,600 tons a year of granular fertilizer, which is used to fertilize the resort’s landscapes. The liquid is treated to reduce nutrient concentrations, with phosphorus being recovered to create solid fertiziler pellets. The remaining water is discharged back to the waste water treatment plant.

The Central Florida Energy Garden was designed to improve upon Reedy Creek’s previous composting efforts, reducing odors and waste. It has been deemed a huge success, winning the American Biogas Council’s inaugural Biogas Project of the Year award. 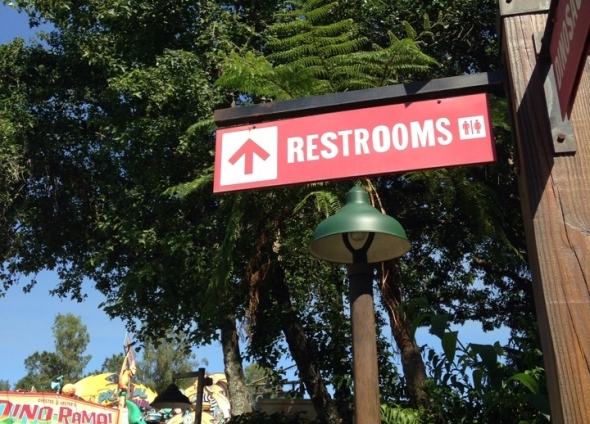 So, that’s the net result of what happens when you go to the restroom at Walt Disney World. Your waste is captured, processed and put to use in creating the spectacular landscapes that give the resort its character and themes, as well as being used to keep the resort spotless and even to help power it.

Keep that in mind next time you flush…

Clearly I need to eat more while at WDW......so I can contribute more.

That is amazing! Who thought that reading about poo would be so interesting?