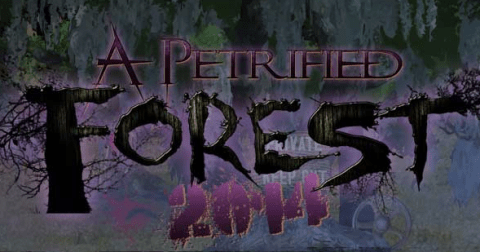 A Petrified Forest started in 2008 as a home haunt in Altamonte Springs, Florida (just outside of Orlando), but it quickly grew into one of the biggest scare mazes across the entire country.  Now occupying some 85,000 square feet, it consists of two different trails through a lot of abandoned – and sufficiently creepy – woods that are populated by 40 vignettes (or “sets”) and over 70 scareactors.

And that, it turns out, is just the tip of the iceberg.  Bands, DJs, food vendors, costume contests, bounce houses, laser tag courses, and costume contests fill out the rest of Petrified Forest’s roster, making the annual haunt into something of a small-town fair or mini-Halloween festival.  (To read all about the event in all its many flavors, be sure to check out our previous, in-depth write-up.)

To say that the group of home haunters takes a decidedly different approach to the seasonal festivities than, say, Disney with its Mickey’s Not-So-Scary Halloween Party or Universal and its (much-heralded) Halloween Horror Nights is a profound understatement; precisely because it’s smaller and more agile, it’s able to react to the evolving scare industry – and, perhaps even more importantly, its attendees’ feedback and desires – much more quickly than any of the major players.

In order to fully appreciate how A Petrified Forest is, in many ways, emerging to the very front of the haunted house pack, we recently spoke with Nichole Scott, head of marketing for the homegrown maze.  From the subject matter and design of its scares to the nature of its extra events, she lists the five ways the haunt will defy your Halloween expectations this year.

1. It takes several years to design a scare

What's the design process like for the haunt each year?  Is the same basic layout re-utilized, or do you end up building new areas/vignettes?  And who's in charge of that process?

The owners of A Petrified Forest, Trish Smith and Kimmy Clark, head up the design and build process from conception.  This is a very thought-out, planned, and executed task that takes up an infinite amount of time.  It really is a constant and year-round process, from the ideas to the actual build time.

Oftentimes, things you may see were thought of years prior.  However, that’s not to say in the middle of building or dressing a set that they don’t get an even bigger and better idea.  And, sometimes, the design has to change so that it flows better into the next set.  They do always take into consideration what guests have suggested and said they wanted to see.

What is nice about being out in the woods is having so much acreage is to work with.  Because of that, it’s a completely different show year after year, and even event night after event night.

This year, we have two scare trails, and so the whole layout is definitely completely changed.

Can you walk us through the normal preparations before the season starts?  When do you guys first sit down and start finalizing everything?

Each haunt runs into each other, really.  Even while working on the build for the 2014 haunt season, Trish and Kimmy are making plans and getting ideas for the 2015 haunt season already.

Each department head works on their own projects, and we meet consistently throughout the year, bouncing these ideas off of each other.

2. You create your own story

Is there an overarching premise behind the haunt (such as a cohesive backstory), or is it more just a collection of scares?

At APF, we do not have a backstory.  Our façade changes each year, and, typically, the first few rooms will follow the facade.  After that, you never know what you will run into.

It really is a beautiful, non-cohesive multitude of scares.

Please speak a bit about the balance between storytelling and scares in a haunt – if there even is one. Is narrative even something that should be attempted to be included?

Other than giving you a few rules at the beginning of the house, we don’t narrate any portion of your self-guided walk through our woods.  This is another reason why we don’t have a backstory.

When you come through A Petrified Forest, you are your own narrator.  You tell the story how you see, hear, touch, and feel it.  Sometimes, what goes through one’s own mind is more maddening than a story we can give you.

3. You’ll be too busy enjoying yourself to even notice the haunt 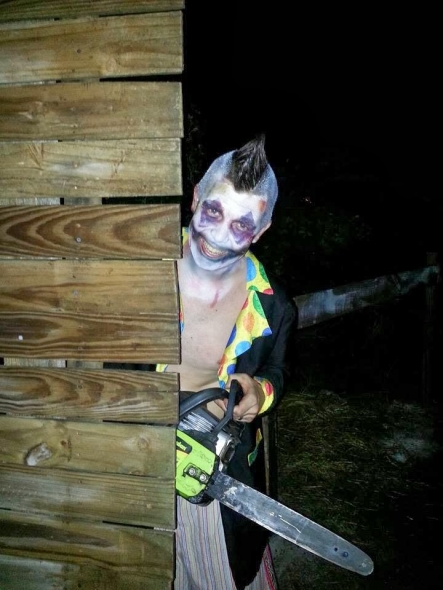 What's the thinking behind offering all of the additional experiences, such as Laser Tag and local bands?  How did that start, and who's in charge of it?

It’s always been the goal of Trish and Kimmy to offer their community more than only a haunted scare trail.  They wanted to be a one-stop attraction for the family that is affordable (and we do cater to many, many families).  Guests can come to A Petrified Forest knowing they can have an evening jam-packed with scares, laser tag, food, music, vendors, backstage tours, and fun, and it’s not going to cost them their first-born.

There are different department heads and people in charge of each sector of the forest.  Some of us have been with A Petrified Forest since it first started as a backyard haunt.

What, to your mind, is the singularly most vital detail to a successful haunt – a certain fabric or sound effect?  The overall layout and flow?  The backstory to get guests in the mood?

There is no one specific detail that is more important than another.  From the time a guest pulls into a parking spot until the moment they exit our scare trail, everything and everyone plays a vital role for the haunt to be a success. Parking, ticket booth line, vending options, the queue, the live entertainment, the scare trail, and the employees… we all play an important role to ensure the guests are satisfied with their visit with us.