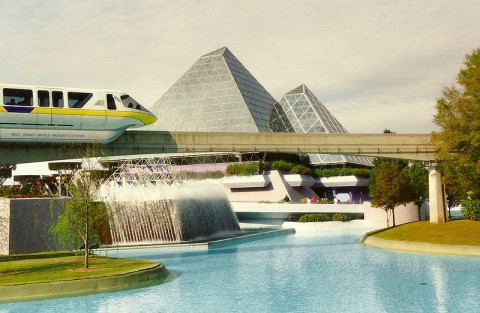 We all love Walt Disney World, but sometimes, it's fun to look back at how the Vacation Kingdom used to be. Thankfully, we have YouTube.

Walt Disney World has changed dramatically since it first opened in 1971: three new theme parks opened, dozens of hotels began operation, countless rides have come and gone, shops have been built, Fastpass was added, Fastpass was completely changed, and so on and so forth.

In fact, the only thing that's remained constant through the years has been change itself. I would argue that's a good thing (as would our own Matt O'Keefe), because it keeps the parks from becoming stale and engenders that sense of excitement and discovery that keeps us all coming back.

Nevertheless, it's hard not to feel a bit nostalgic for the attractions and experiences of a time gone by.

Even if you've only been to Walt Disney World once, or not at all, there's something sociologically fascinating about the kinds of experiences families enjoyed in the decades before. And if you're a Disney lifer, a trip down Memory Street USA can be just as much fun as a visit to the real place.

Thankfully, YouTube has us covered, offering hundreds of hours of footage from the Disney World of yore. If you like looking at how the World has changed, or if you want another glimpse at that now-demolished attraction you remember so well...what follows is for you.

One of the great small joys of a Disney vacation is the experience of arriving at your resort hotel, turning on the TV, and seeing the special Walt Disney World channel. It serves as visual confirmation that, yes, you are in fact at the Vacation Kingdom and, yes, your only task in the coming days is to have as much fun as possible. If you have a job, or school work, or any other real-world obligation, that moment is the moment when all that stress melts away.

This was no less true in the Walt Disney World of the late 80s.

The above video (and its second part) shows a recording of that in-room channel, as it would have looked in 1987. There are some obvious differences from today (notably the fact that there are just two theme parks), but the channel served largely the same purpose then as it does now – to introduce guests to all the offerings of Disney World. Of course, nowadays, that's a much tougher task.

At 3:31 in the video, make note of the extended look at Epcot's The Living Seas (now The Seas with Nemo and Friends) which had just opened in 1986. Later in the video (around the 6:07 mark), you can even get a glimpse of the original Disney Village, which has since been updated as Downtown Disney (and will soon become Disney Springs).

Disney's vacation planning videos are fascinating in that they provide a snapshot of what Disney World was like at a particular time. The 1993 version is one of the longest, clocking in at almost 45 minutes. The reason for that length? Lots and lots of change.

Michael Eisner became the CEO of the Walt Disney Company in 1984. Eisner spent his first few years on the job stabilizing the company's filmmaking wing, and at the end of the 1980s, the company began churning out hits again: The Little Mermaid, Beauty and the Beast, and Aladdin are just a few examples.

As a result of that success, Eisner set out to push the company to newer heights in what would later be called the Disney Decade – a period lasting roughly from 1989 to 2001 (depending on who you ask). The Disney Decade saw Disney World expand into the enormous, jam-packed resort we know today.

Just in the years between 1987 and 1993, Disney World opened nine hotels, a water park, a theme park, and a nightlife complex. That's an awful lot of growth, and its part of the reason the 1993 Vacation Planning Video is so long – there was simply so much new stuff for prospective guests to be acquainted with.

The section about the "Disney Studios" (they always had trouble naming that place) begins at 10:30 and remains one of the best looks at what the park was like when it opened.

4. and 3. A Day at the Magic Kingdom and A Day at Epcot Center

These two videos are part of a set of souvenir tapes guests could buy in the 1990s. Both are an extended look at their namesake parks, as told through the eyes of nominally-real parkgoers.

They are, essentially, extremely well-produced home movies that can give you a guest's-eye view of what the parks were like back in the day. If you're a Disneyphile, this sort of thing is the closest you'll get to actually being there. For those of us who were there, they provide quite a few “oh, I remember that!” moments.

For example, at the 14:11 mark in the Magic Kingdom video, you'll get reacquainted with the Mike Fink Keel Boats: an attraction based on Walt Disney's Davy Crockett that circled the Rivers of America until 2001.

And in the Epcot edition, at around 6:49, you get an extended look at the Imagination! Pavilion, including the original ImageWorks and Rainbow Corridor.