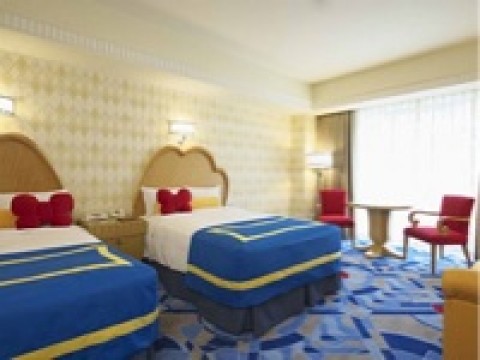 When you hear the word "Disney," you probably think about movies or theme parks: but you might want to add "great hotels" to your mental association list. Disney's hotels are more than just a place to sleep after a day in the Orlando sun — they're an expansion of the theme park experience. Staying at a Disney hotel will cost more than staying at a non-Disney hotel, but the advantage is that you never have to leave the Disney bubble for the duration of your vacation.

Like the parks themselves, Disney's hotels are all about theming and attention to detail: if you think of each hotel like its own "land," you'd be on the right track. While each hotel has a theme that goes from the hotel exterior to the tiniest details of individual rooms, some hotels go above and beyond with special rooms that have more elaborate theming than the norm — and that's what we're going to talk about today.

You'll no doubt notice that Disneyland's Dream Suite and Magic Kingdom's Cinderella Castle Suite aren't on this list — they're some of the most themed rooms on Disney property. Although these rooms are spectacularly themed, they're not rooms you can call up and book. All of the rooms below are rooms you can stay in... though, admittedly, you might want to win the lottery first. 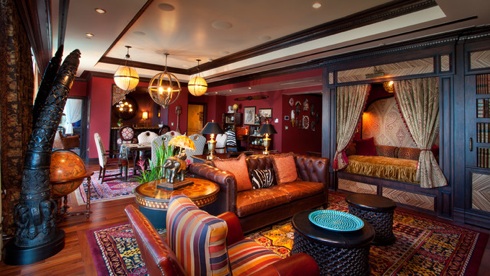 The Disneyland Hotel is the oldest of the Disney hotels, opened in October 1955 (though not originally Disney-owned), not long after Disneyland itself. However, it's been remodeled more than once over the years and doesn't show its age in the least. The most recent remodel added a selection of highly themed Signature Suites. Disney doesn't actually list pricing for these suites — you have to call to book — but since they do list pricing for the $1000 a night 3-bedroom suite, which can only leave us to assume that Signature Suites cost more. Possibly a lot more.

But you certainly get what you pay for in the Adventureland Suite, which sleeps up to 6 adults in the most luxurious safari camp you're ever likely to visit — and even has its own Adventureland-inspired soundtrack! The only downside is the view of Downtown Disney outside your window, which does rather break the illusion that you're braving the jungles. (If you want to maintain that illusion, it's Animal Kingdom Lodge you're looking for — but more on that later.) 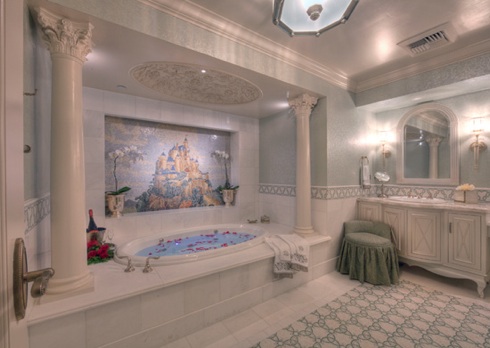 The Adventureland Suite isn't the only highly themed suite at the Disneyland Hotel — there's also the Fairy Tale Suite, lavish enough to satisfy any Disney princess (or prince). Though this is smallest of the hotel's themed suites, featuring only a single bedroom, this suite still doesn't skimp on luxury. The styling here is, of course, fairy tale: with a four poster canopy bed, a special greeting from Tinkerbell when you enter, a mosaic of Sleeping Beauty Castle over the jacuzzi tub, and a fantastic view of the Disneyland fireworks.

What more could you ask for? 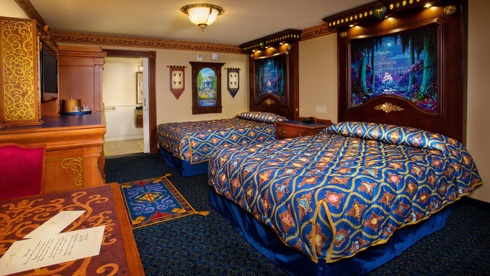 If you're looking for rooms with a more reasonable pricetag, however, you might want to check out the Royal Guest Rooms at Port Orleans at Walt Disney World. These rooms are less extravagantly themed than the Disneyland Hotel's Signature Suites, but with prices starting around $200 a night (depending on the season), they're a lot more affordable. These rooms are fairly standard hotel rooms that sleep up to 4 adults with two queen beds, but have extra theming to make your stay a bit more special.

You're greeted with a letter from The Princess and the Frog's Princess Tiana when you arrive and the room is decked out with subtle references to many of Disney's fairy tales, from Aladdin's lamp making up the sink faucet to artwork of Disney characters enjoying a trip to New Orleans adorning the walls. 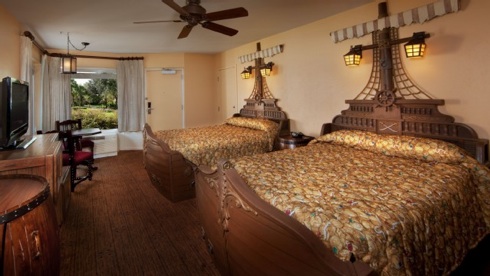 If princess theming isn't what you're looking for in accommodations, perhaps the Caribbean Beach Resort's Pirate Rooms will strike your fancy. Similar to the Royal Guest Rooms, these are fairly standard hotel rooms — just with lots of Pirates of the Caribbean touches. The bed frames in the rooms resemble pirate ships and the bedspreads display piles of gold coins and jewels. Trust us, it's less garish — and more fun — than it might sound.

Pirates don't lead the most luxurious life, however, so you'll find your bedside tables and dresser have been styled to look like barrels and crates — but just remember, it's all part of the themed experience!