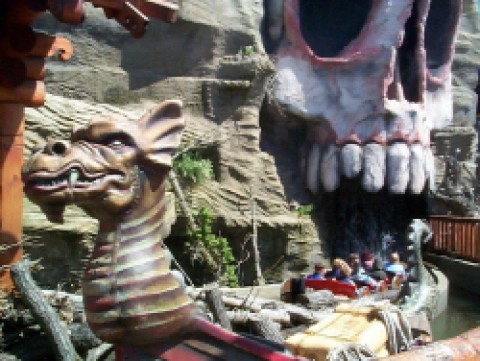 Generally speaking, UK theme parks can't really compete with those in North America, Japan and Germany in terms of quality dark ride experiences. Sure, we have some good coasters and cheap thrills - Thorpe Park delivers them all day long - but in terms of Disney-style attractions, we're a bit lacking. However, amongst the lacklustre offerings shine a few very bright gems: I give you the UK's 5 best dark rides.

5. Over the Hill – Adventure Island

Over the Hill's Undertaker is ready to scare you.

Adventure Island is one of the very smallest of the prominent UK parks, and this is one of the reasons Over the Hill is so impressive. The ride opened as Beelzee Bob’s Trail in 1999 and was a regular family ghost train; taking you through unrelated ghoulish scenes and eventually the very pits of hell, but it was aging badly and Adventure Island took the wise decision to revamp it heavily. The track itself remains the same, which is a good thing - it is remarkably long considering how small the building appears from the outside, and even provides a few speedy moments. However, the entirety of the interior has been overhauled. The attraction is now themed to a cemetery, run by a man named ‘The Undertaker.’ The ride itself is a train ride he has built to tour the cemetery, but anyone who boards it has never returned. There are no massive thrills - after all, the ride is very family-oriented - but there are some impressive visual effects and it’s one of the friendlier dark rides out there.

Almost every major park has its own version of the laser-gun dark ride; Alton Towers and Drayton Manor both have impressive models, but there is no doubt that Chessington’s incarnation is the most impressive. Themed to ancient Egypt, Tomb Blaster doesn’t have a specific storyline, but the idea is that you are in a ‘utility vehicle’ and are being sent into the tomb to rid it of an evil curse. Despite the lack of plot, the physical theming is fantastic; the entire exterior of the ride, including the queue line, is built to look like an Egyptian building complex, complete with Sphinxes and pyramids. The ride inside is just as fantastic; there are some wonderful scenes involving revolving tunnels and a massive snake, and it is also very lengthy. As with Over the Hill it is definitely aimed at all the family rather than the big thrill-seekers, but the excitement of competition means it is just as enjoyable as anything white knuckle ride.

Hex was built at Alton Towers in 2000, slap bang between Oblivion in 1998 and Air in 2002. Because of the addition of so many incredible roller coasters over the past two decades it has, very unfairly, gone generally under the radar. Hex is a true masterpiece of design and imagination, and easily competes with its rivals both on this list and in across the globe. To those unfamiliar with the park, Alton Towers is built around a stately home (almost a castle, in fact) built in the early 1800s, and Hex has been built into the Towers complex.

The ride is based on the local legend of The Chained Oak; one night the 15th Earl of Shrewsbury denied an old beggar money when returning to the Towers, and as a result she cursed him, stating that for every branch of the old oak tree that fell, a member of his family would die. True to her word, a storm brought a branch down and one of his relatives died. The ride takes you deep inside the Towers and into a "secret vault" in which the Earl performed experiments on the fallen branch in order to banish the curse. Alton Towers has taken a deal of poetic license with the original legend, but nevertheless Hex offers a creepy walkthrough a real abandoned mansion, before the stunning climax, which involves Vekoma’s brilliant Madhouse ride, simulating being spun completely upside down around the room. There are no major physical thrills on Hex, but it is truly chilling.

OK, The London Dungeon is not a dark ride as such, but rather a horror attraction which encompasses a number of dark rides. Although none of the individual rides in the Dungeons would be worthy of a place on this list, all of the them form part of a single walkthrough experience. This means that guests queue for one and all at the same time, and thus I think it’s fair to group them together for the purposes of this list. As with all the Dungeons attractions, The London Dungeon takes you on a historical tour of the city’s gruesome past. Some of the scenes are based on historical events, such as Jack the Ripper and the Great Fire of London, whereas some are purely fictional such as Sweeney Todd. All deliver thrills and laughs.

The actors are often brilliant, providing typical scream-worthy moments as they jump out, but also keeping the atmosphere lighthearted, especially in the hilarious Courtroom. In between the walkthrough scenes are three rides. The first is the small flume ride Traitor: Boat Ride to Hell, which is a brief journey through London’s sewers, plunging you into darkness. The second is the brand new Vengeance, billed as a 5-D shooting ride based around 50 Berkeley Square; an infamous haunted house in the city. The final ride is the now common Extremis drop ride, simulating a hanging as you are plunged down a miniature tower. Due to the low ceiling height, all the rides are small, but actually provide a decent thrill, especially Extremis, and together make The London Dungeon one of the city’s top attractions.

Valhalla's external theming is a stunning as its interior.

Truth be told, Valhalla is, first and foremost, a water ride. However, it is completely in the dark and therefore definitely earns its place on this list. Through the years, Blackpool Pleasure Beach has been heavily criticized for its lack of theming. Many feel this is unjustified - it is much more of a traditional seaside amusement park than it is a theme park, but nevertheless the park took heed and went all out in constructing one of the finest dark rides on the planet. In Norse mythology, Valhalla is the afterlife for Viking warriors, and the ride takes the Norse theme incredibly seriously.

Although the actual ride system was built by Intamin, all of the theming and special effects were designed by a company called Sarner. Once inside your Viking Longboat you are subjected to numerous incrredible scenes involving strong winds, fireballs, snow and a tunnel made of water. The ride delivers just as well in thrills, with two drops, the largest of which is 80 feet, making it one of the largest in the world on a water ride. Although the effects have been reduced in recent years, the ride is currently being refurbished so we should see it back to its best. Valhalla is comfortably the Pleasure Beach’s best ride, and a true tour de force in the theme park world.