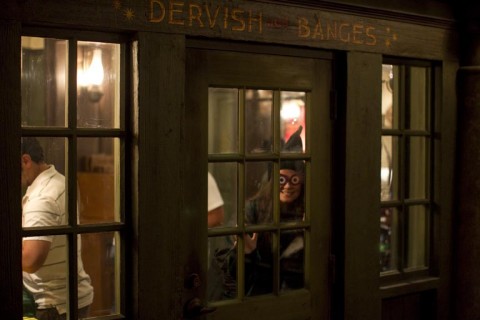 In our first article analyzing the results of Theme Park Tourist's Wizarding World of Harry Potter survey, we looked at general reactions from those who have already visited the new land, and the plans and expectations of those who haven't. In this second part, we'll see what readers make of the Potter-themed shops and restaurants in Universal Orlando’s recreation of Hogsmeade Village, and whether they prefer standard Butterbeer or the frozen variety.

Universal is aiming to recoup much of its $200 million-plus investment in building the Wizarding World through sales of merchandise to excited Harry Potter fans. The shops and restaurants in the Wizarding World are themed to a far greater extent than most theme park retails outlets, and given their prominence in the Potter books and movies are almost attractions in themselves. But has Universal succeeded in creating a convincing feeling of shopping in Hogsmeade, and is dining near Hogwarts everything a Potter fan could dream of?

Opinions of the Wizarding World’s shops

With only one all-new attraction (Harry Potter and the Forbidden Journey) forming part of the Wizarding World, visiting the various shops that are present in the area is likely to consume a major part of the time guests spend there. All are faithful recreations of stores featured in J.K. Rowling’s stories, and each offers a large number of Wizarding World-exclusive items.

One store has generated far more coverage than any of the others in early Wizarding World reviews. Ollivander's Wand Shop features a pre-show in which a child is plucked from the crowd and has a wand "choose" them as its new owner (parents should be warned that they must still pay in order to keep the wand). Guests are then herded through into the shop itself (and the adjoining Owl Post), where they can choose from a range of wands, each with different "magical powers".

Perhaps due to the amount of attention Ollivander's has received in the media, over a third of Potter fans (35%) who have yet to visit the Wizarding World rank it as the shop they are most looking forward to seeing: 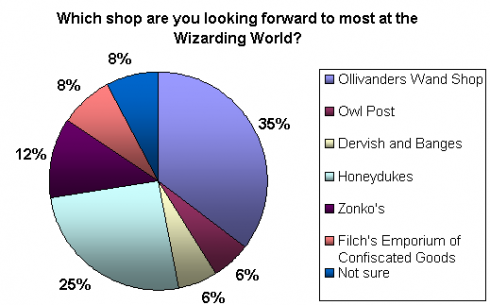 A visit to Honeydukes is also highly-anticipated by many prospective visitors, with a quarter citing the "magical" sweet shop as the most exciting store. The store received strong praise in online reviews for its selection of unusual treats, which include "Bertie Bott's Every Flavour Beans", "Cauldron Cake" and "Peppermint Toads". 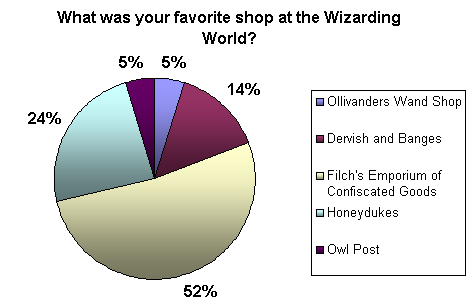 Perhaps surprisingly, though, a store which barely figures in the thoughts of those who have yet to visit the Wizarding World proves to be the most popular among those who have. While Ollivander's is all but ignored, Filch's Emporium of Confiscated Goods is cited as the best shop in town by over half of visitors. It has proven to be a popular location for kids, selling a huge variety of branded merchandise and including an "evil corner" selling Lord Voldemort dolls and Death Eater t-shirts.

Why the discrepancy between the two groups, when Ollivander's received almost universal praise from reviewers in the media? Possibly, it can be explained by the lengthy queues to get in to the pre-show, which at times have extended for two hours or more since the Wizarding World's grand opening. The same complaint is also heard of other shops in the land, though, with one reader stating that the stores are “outrageously crowded unless you go first thing early admission” and another commenting "I would like to see more shops in the Wizarding World. The size of the existing shops made shopping very challenging."

Despite this, the stores seem to have been a hit overall with most visitors – particularly younger guests. One out-of-pocket reader reveals: "I am almost out of peppermint toads and am suffering withdrawal. My kids bought so much I felt like Mrs. Weasley at the cash register!"

Those planning on dining in the Wizarding World of Harry Potter are not currently spoilt for choice, with one sit-down restaurant (The Three Broomsticks) and one quick-dining location (The Hog's Head Pub) being the only eating establishments in the opening-day line-up. Fortunately, almost all of the respondents in our survey who ate at one of the two locations came away with a positive impression. 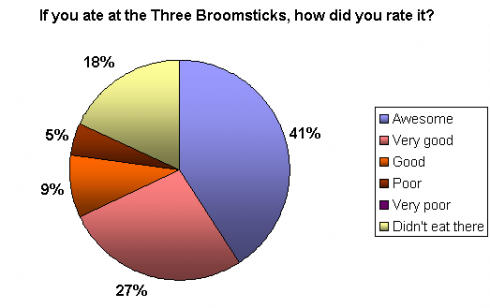 Over 82% of guests tried out The Three Broomsticks, with half of them rating the experience as "awesome". Most of the rest ranked it as "very good" or "good", with only a handful describing it as "poor". As well as the impressive theming of the restaurant (which is faithful to the Harry Potter books and movies), cost appears to have been a factor. Several options are available for under $10, while options including shepherd's pie branch away from standard theme park fare. 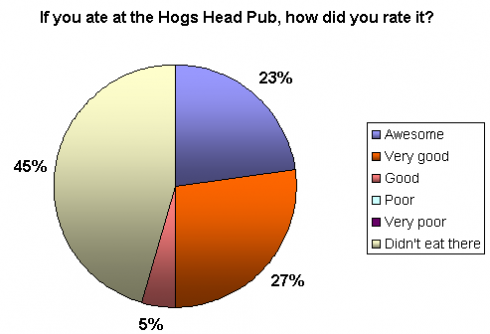 Although many readers skipped the Hog's Head pub, it receives a similarly warm response. The vast majority of those who dined there rank it as "awesome" or "very good", with the theming (including an animatronic hog's head) receiving positive feedback.

It's rare for a drink sold at a theme park to receive much attention, but Harry Potter fans have been itching to see what Universal’s take on Butterbeer would taste like ever since the park announced it would be available. Two varieties of Butterbeer (which is a fictional drink featured in the books and movies) are available – a standard, liquid version and a frozen version.

The results of our survey show that Wizarding World visitors love both varieties of Butterbeer, and this is backed up by the long queues at Islands of Adventure to get hold of the beverage. However, in common with the online reviews covered in our recent round-up, the frozen version receives the strongest vote of approval. 93% of guests that tried it rate it as "very tasty", compared with 50% of those who tasted standard Butterbeer. Of course, the scorching Florida summer weather may have played a part in this.

The results of Theme Park Tourist's survey suggest that Universal Orlando is likely to make a killing on sales of merchandise and Harry Potter-themed foodstuffs at the Wizarding World. This is despite grumbles about the small size of the shops in the area being the most common complaint about the Islands of Adventure’s new land as a whole.

In the final article in this series, we'll look in-depth at reactions to the Wizarding World's rides, including Harry Potter and the Forbidden Journey. Click here to continue to part 3...