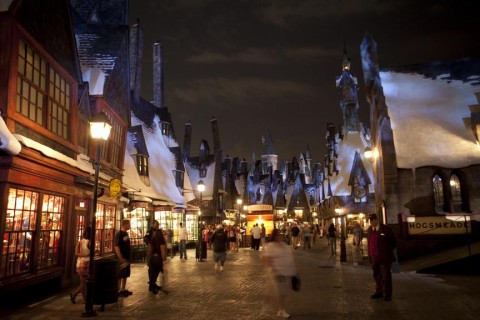 In the previous article in this series, we looked at how online reviewers rate Universal's Wizarding World of Harry Potter overall. In this follow-up, we'll look in more detail at opinions on the area’s shops and restaurants – with a particular focus on Ollivander's Wand Shop and The Three Broomsticks restaurant. We'll also look at how reviewers rated Butterbeer, the Wizarding World's signature drink, and whether they preferred the standard or frozen variety.

When you've read through the online opinions, we'd love to hear your views on the Wizarding World, whether you've already visited it or are dreaming of a future trip. If you complete our Wizarding World of Harry Potter survey by July 20, 2010, you'll be entered into a draw to win a full box set of Harry Potter books along with other great prizes.

Of all of the Wizarding World's shops (which recreate fictional locations from the Harry Potter books and movies), Ollivander's Wand Shop receives by far the most attention and column-inches from reviewers. There seem to be two main reasons for this – firstly, that it is almost a full-blown attraction rather than a simple shop, and secondly that it demonstrates perfectly all of the plus points and minus points shared by the other retail outlets in Islands of Adventure's new land. 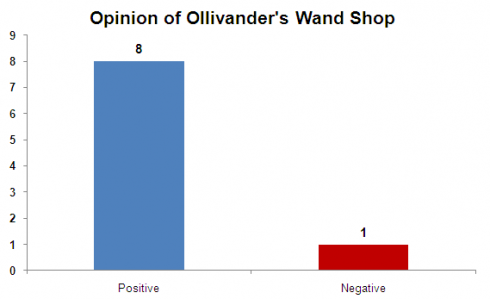 As can be seen in the chart above, the vast majority of Wizarding World reviewers who discuss Ollivander’s were impressed by it overall. Behind the Thrill's Erik praises the store's faithfulness to sets of the Harry Potter movies: "The shop is amazing, stacked full of wands, and looking like it's ripped completely from the movie."

The pre-show in Ollivander's – in which a child is plucked from the crowd and has a wand "choose" them - has also impressed visitors. It's a break from traditional theme park stores, in which guests are herded rapidly out of attractions and into outlets filled with generic merchandise. As die-hard Potter fan Ericka Peterson puts it: "Be sure to visit Ollivander's wand shop. It's not just a store; it's an experience." 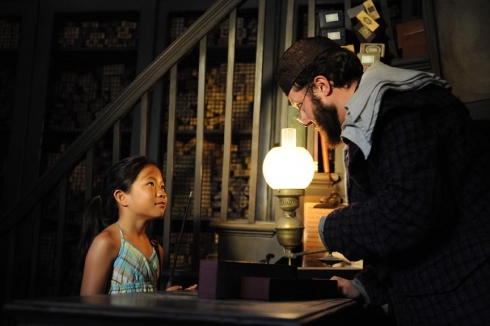 Ollivander's is a full-blown show as well as a shop.Image © Universal Orlando

As with the Wizarding World overall, the biggest complaint against Ollivander's is that it is too small. This has resulted in both long queues outside, and in overcrowding inside. Following the pre-show, the majority of the crowd are ushered into the neighboring Owl Post to choose their own wands, but this is also "very small, and hard to move around in" according to Behind the Thrills.

The selection of wands on offer has not received universal praise either. David Hernandez laments the lack of variety in the wands, saying: "While a few did look special, there was a few that had simply had their handle or tip swapped out. It was a poor example of a mix-and-match approach to create a new wand." The store has also struggled to keep up with demand in the busy weeks following the Wizarding World's opening, with some wands going out of stock.

Although Ollivander's is clearly the highest-profile shop in the Wizarding World of Harry Potter, some reviewers do take the time to discuss the area's other retail outlets. While none receive the same share of positive opinion as Ollivander's, most are well-received and seen as in-keeping with the theming of the area as a whole.

Honeydukes, which sells "magical" sweets, receives praise for its selection of treats (which include "Bertie Bott's Every Flavour Beans", "Cauldron Cake" and "Peppermint Toads"). Despite the unattractive-sounding names, one reviewer assures readers that "Honeydukes is mouth watering from the first glimpse you take". 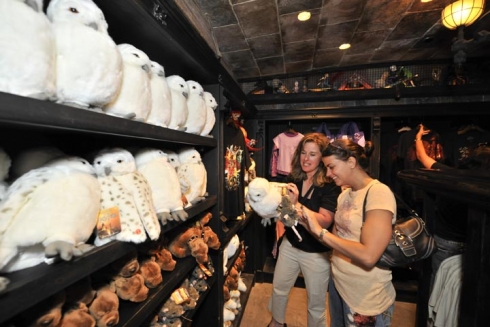 Filch's Emporium of Confiscated Goods is a gold mine for Potter fans.Image © Universal Orlando

A visit to Filch's Emporium of Confiscated Goods could prove to be the most expensive part of a trip to the Wizarding World for many Potter fans. The shop sells a huge variety of branded merchandise, included an "evil corner" selling Lord Voldemort dolls and Death Eater t-shirts. The Tampa Tribune's Kevin Walker offers some sound advice to younger visitors in their review: "Kids, this is the gold mine, so don't hit Mom and Dad up too hard for the goods until you get to this place."

The small size of the Wizarding World's shops is mentioned repeatedly by reviewers, with The Owl Post and Dervish & Banges seen as two of the worst examples. WIzardingWorldPark.com's review says of the pair: "The Owl Post and Dervish & Banges are both extremely small, making it very hard to find anything you're looking to buy (especially wands) and I expect it to be VERY, VERY crowded and frustrating come opening time." These concerns have been borne out following the grand opening, with Twitter user guide2disney reporting from the park "Owl Post and Dervish is so packed you can hardly move. They did not make these stores big enough!"

The Three Broomsticks and the Hog's Head Pub

The Wizarding World's main eating establishment, The Three Broomsticks, receives a number of rave reviews - with praise once again centering on the restaurant's faithfulness to the Harry Potter books and movies. Reviewer "J.L.C."'s view is typical: "I walked into the real feel of a Wizard destination for food, drink and good conversation. Everything felt warm and homey."

Perhaps surprisingly, given views on the cost of merchandise sold in the Wizarding World, value for money is raised by several reviewers as a plus point of the Three Broomsticks. Zoey Bull points out that there are several options available for less than $10, describing the cost as "not bad at all".

The only real criticism encountered of The Three Broomsticks relates to its failure to block out the rest of Islands of Adventure's attractions, something which is achieved very effectively in the rest of the Wizarding World. In particular, Kevin Walker sarcastically describes the "magical" view of the Incredible Hulk rollercoaster from the Three Broomsticks' patio. 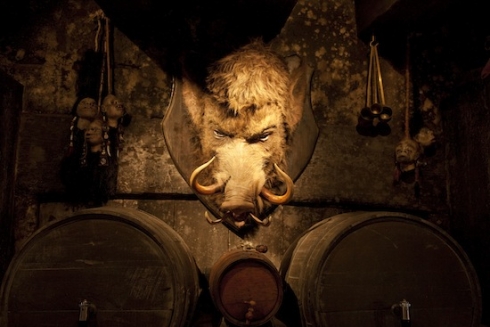 An animated Hog's Head watches over the pub of the same name.Image © Universal Orlando

The Hog's Head Pub, a quick dining location and beverage-seller attached to The Three Broomsticks, receives less coverage in reviews of the Wizarding World than the larger restaurant. Again, reviewers focus on its "authenticity" and the level of detail in its theming, with J.L.C. claiming "the Hog's Head gave you the feeling you might want to dust off your seat before sitting down, but of course in a good way."

Rarely has the launch of a new theme park or attraction generated so much coverage of a mere type of refreshment that is sold there. But then, Butterbeer is no ordinary drink. It was brave of a Universal to attempt to create a version of the fictional beverage – which no-one had ever tasted – that would sate the thirst (literally and metaphorically) of legions of Harry Potter fans. If reviews so far are to be believed, though, Universal has managed to pull it off. 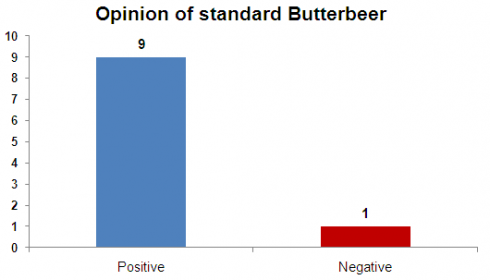 9 out of 10 reviews that discuss the taste of Butterbeer come to a positive verdict, although reviewers disagree on how to describe the drink’s taste. Orlando Attractions Magazine describes it as a "mix between vanilla creme and butterscotch". Erik at Behind the Thrills goes for a slightly different description, saying: "Butterbeer is like a Cream Soda milkshake without it being ice cream...if that makes sense." A third opinion is proffered by Zoey Bull, who claims Butterbeer "tastes like root beer with butterscotch foam on top". 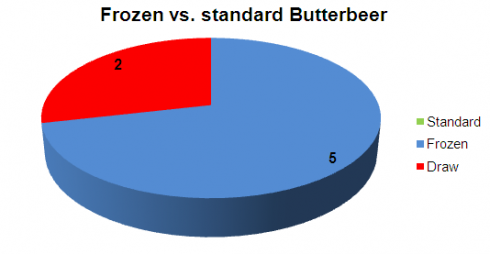 Of course, guests at the Wizarding World can choose between more than one variety of Butterbeer – with standard (i.e. liquid) and frozen variants available. Of reviewers that compare the two, the overwhelming majority prefer the frozen kind. Whether or not the scorching Florida summer played a role in these decisions is not clear.

In the next part of our Wizarding World of Harry Potter review round-up, we'll look at reactions to the land's rides – including Harry Potter and the Forbidden Journey. Continue to part 3...