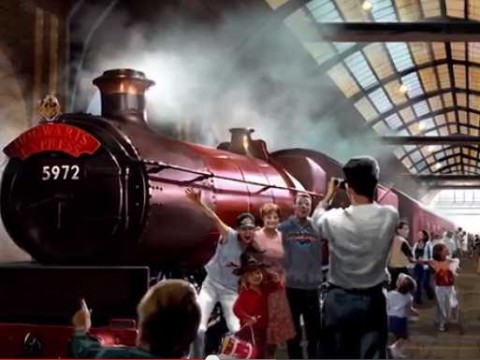 The opening of the Wizarding World of Harry Potter at Universal's Islands of Adventure in June attracted huge media attention and legions of excited Potter fans. Universal hopes that the new land will drive up attendance at its Orlando theme parks, establish the resort as a multi-day destination and generate a fortune from merchandise sales.

We've already looked in-depth at the reception that the Wizarding World received from media outlets and bloggers in our three-part review round-up, but what do "normal" guests make of the $200 million area? We surveyed Theme Park Tourist readers to find out, and in this first article in a series of three we'll look at their overall thoughts and their hopes for the Wizarding World’s future.

We offered two versions of the survey – one for readers who have already visited the Wizarding World, and one for those who haven't. We'll cover responses from both in this article. The survey generated over 70 responses, so the results should be taken as an indicator of opinion rather than being statistically significant. It is also important to note that entry into a prize draw to win a box set of Harry Potter books was offered as an incentive to take part – so it's likely that many of the respondents are existing fans of the books and movies.

Reasons for visiting the Wizarding World 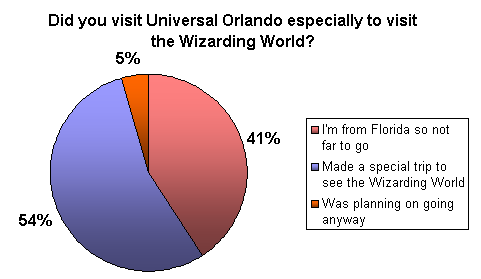 Universal will be pleased with the response to our first question, which asked why visitors to the Wizarding World made the trip. Although around two-fifths cited the proximity of their homes to the Orlando park, over half made a special trip to see the Wizarding World.

The expensive deal to license the Harry Potter brand looks set to pay off with significant attendance increases at Universal Orlando. Of the survey respondents who have yet to see the Wizarding World, over 84% said that they were planning a visit to the resort within the next three years. Of those, 65% cited visiting the Wizarding World as the main reason for making the trip, with 25% planning a visit anyway.

Comments from excited Potter fans included "it's the most amazing thing I have ever heard of and I can't wait to go and see it all" and "I always wanted to go to Hogwarts and now that dream is real".

A major part of Universal's motivation for building the Wizarding World of Harry Potter was to encourage guests to stay longer at Universal Orlando. However, with only one all-new attraction (Harry Potter and the Forbidden Journey) in the new land's line-up, is there really enough to do to keep them away from Florida's other attractions for extended periods? 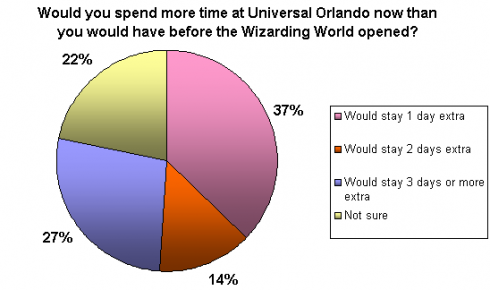 The results from those who have yet to visit the Wizarding World are promising, with nearly four-fifths saying that they would be likely to spend an extra day or more at the resort now that the Potter-themed land is open. Incredibly, over a quarter expect to stay for an extra 3 days or more. However, that pattern is not reflected in the results from those who have already visited the Wizarding World. 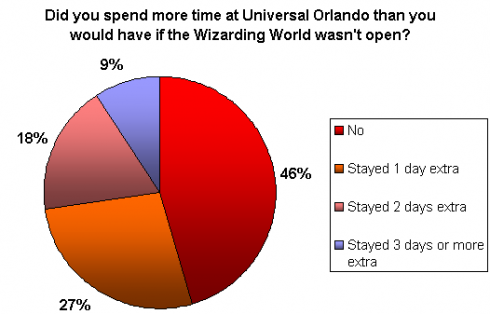 Almost half of the visitors to the new land claim that they spent no extra time at all at the park, while relatively few (9%) stayed for an extra 3 days or more. Of course, these results could be skewed by the fact that 40% of respondents were from Florida, and therefore can plan on frequent return visits to the Wizarding World.

Opinion is divided on how long is needed to thoroughly explore Hogsmeade and Hogwarts Castle. While one respondent describes the area as "much smaller than it looks", another claims that there is "so much to see, you can’t possibly see it all in one day".

Views on theming and atmosphere

Universal has invested heavily in recreating Harry Potter's world as faithfully to J.K. Rowling’s books and the movies based on them as possible. The lavish attention to detail appears to have paid off, with visitors praising the overall theming and atmosphere in the Wizarding World. 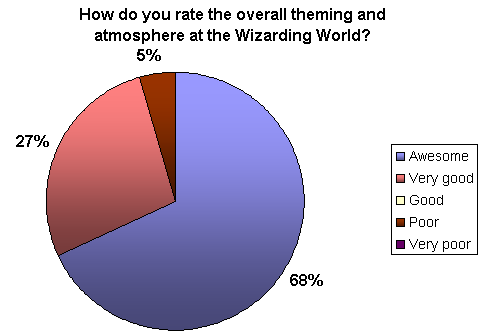 A minority of visitors criticized the small size of the Wizarding World and blamed it for causing overcrowding, but the overwhelming majority speak very highly of the area. One respondent sums up the prevailing view, saying: "Universal did a fantastic job theming this space and for a long time fan it feels like home. I have lived (in my mind) in these spaces for many years and to get the chance to go into Ollivander's and drink a Butterbeer is just phenomenal."

For a long time, Universal Orlando has lacked a visual landmark to compete with the iconic Cinderella's Castle at Walt Disney World's Magic Kingdom. In Hogwarts Castle, it may just have found one.

Asked to compare the two, 73% said they prefer Universal's recreation of Hogwarts, with only 5% favoring Disney’s Cinderella Castle. Of course, the potential bias towards Potter fans in our survey may partially explain this – along with the fact that Hogwarts is almost four decades younger than the Magic Kingdom's centerpiece (which was constructed in 1971).

Hopes for the Wizarding World's future

With Universal's licensing deal believed to stipulate that it must add new elements to the Wizarding World to coincide with the release of the final two Harry Potter movies, it's no surprise that the rumor mill is already churning around a potential expansion. The remaining area of the Lost Continent at Islands of Adventure (the rest of which was absorbed into the new land) is the most obvious location for any new additions, but what would Wizarding World guests most like to see added? 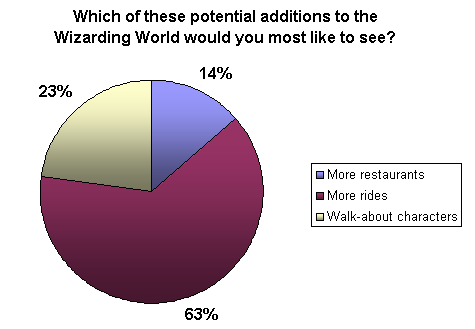 Perhaps unsurprisingly, the majority of visitors (63%) say they would like to see more rides added to the Wizarding World. Suggestions include converting the stationary Hogwarts Express train into an actual ride, a 4-D show based on a magic lesson at Hogwarts, and a trip to the lowest vault in Gringotts Bank.

One of the more practical suggestions is a plan to alleviate the queues that have built up at the Wizarding World, both to get in to the land and to enter its retail outlets: "Since they can't expand the stores, I wish they'd have more kiosks outside for merchandise. I wish they'd also sell Butterbeer and Pumpkin Juice right outside Hogsmeade so those that don't really want to go in but want to try some can without adding hours to the lines to get into Hogsmeade. They should also have one or two carts outside selling some snacks."

Staying in the magic

Universal Orlando's limited range of (relatively expensive) on-site hotels have often been cited as a reason for guests spending less time at the resort than they do at rival Walt Disney World. Although a Harry Potter-themed hotel does not form part of the current Wizarding World, we asked whether guests would consider staying at one if it was added in future. The response was emphatic: 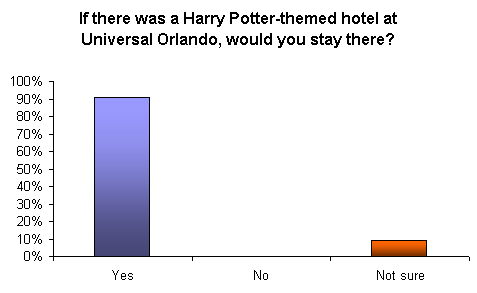 82% of survey respondents claimed they would stay in a Potter-themed hotel, with only 6% saying that they definitely would not. Some offered suggestions for a theme, with comments including "The Leaky Cauldron would make a great hotel!" and "I would have liked a hotel in the castle."

As with our round-up of online reviews, the Wizarding World’s small size and the queues that this causes were among the most frequent complaints from our survey respondents. One describes the new area as simply being "too small a space for that many people", although the huge crowds attracted during the first few months after opening are sure to die down eventually.

Queues for the Wizarding World's shops, rather than its rides, cause the most concern. One visitor complains: "Didn't get in the shops because the queues were longer than those for the rides. Had to queue to get into the section. Not my idea of a good day. I'll go back because I'm a huge Harry Potter fan but honestly, the whole thing looks great in the advertising but falls apart badly when you add people."

Negative comments are in a minority, though, and most Potter fans simply can't use enough exclamation marks to emphasize how much they enjoyed their visits to the Wizarding World. Typical opinions include "The most amazing place I have ever been to!!!!!" and "It is the most immersive experience I've ever had at a theme park. It feels totally separate from the rest of Universal."

Universal will be pleased to note the commitment shown by some Potter fans to visit the land of their dreams. One describes his journey: "My trip there was fantastic! I was dying to visit the WWoHP. I traveled from Toronto, Canada to Orlando BY CAR to see it (along with a few other places, but mainly tWWoHP) & it was definitely worth it. One of the best memories/experiences in my life!"

The results of Theme Park Tourist's survey suggest that Universal has a goldmine on its hands with the Wizarding World of Harry Potter. Most Potter fans can't wait to visit, and those that already have are gushing in their praise. There are a few areas of concern, though, particularly the limited size of the area, and plenty of scope for further expansion and improvement.

We'll look in-depth at reactions to the Wizarding World's shops and restaurants in the next article in this series, before concluding with a round-up of views on Harry Potter and the Forbidden Journey and the land's other rides. Click here to continue to part 2...