Bored While Waiting In Line? These 7 Rides Have The Best Queues in Universal Orlando Resort 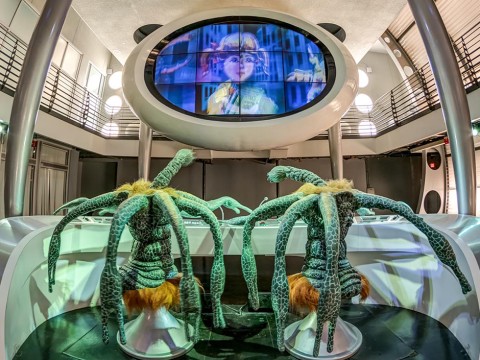 When visiting Universal Orlando, or any theme park for that matter, the excitement and thrills that you experience within your day come with one unfortunate caveat: they will likely be preceded by some form of wait time.

However, this time spent anticipating these world-class attractions doesn’t need to be any less fun, and at Universal Orlando there are a number of rides where the queue lines have been specifically designed to keep you entertained as you edge your way closer and closer to the excitement that lies ahead. So without further ado, here are 7 rides at Universal Orlando that feature the most exciting queues!

Let’s start with perhaps the two most obvious ones...

1. Harry Potter and the Escape from Gringotts (Universal Studios)

As you enter the doors of this Wizarding World attraction, you’re immediately transported into Diagon Alley’s Gringotts Bank, the safest place on earth! While there are no interactive elements within the line, the queue of this attraction allows you to walk through the main hall of Gringotts bank, as you’re carefully and curiously observed by a number of Goblins who are hard at work at their desks. Further on in the queue, you then enter a ‘lift’ and so begins the deep descent into the Gringotts vault.

2. Harry Potter and the Forbidden Journey (Islands of Adventure)

A short journey over on the Hogwarts Express will transport you to the Wizarding World’s pièce de résistance, Hogwarts castle, which houses the Forbidden Journey attraction. From the outside, Hogwarts castle is certainly something to behold, however, once you step inside, you’re given the opportunity to wander the halls of Hogwarts just like a real student would. Various Hogwarts alumni feature throughout this attraction’s stunning queue line, though you may need multiple visits in order to truly take in all of the incredible details that Universal Creative have put into crafting this immersive walk-through experience.

After watching arguably one of the most iconic theme park pre-show videos of all time, you are immediately transported into Elliott’s world as you enter the forest from the final moments of Steven Spielberg’s E.T: Extra-Terrestrial. Aside from its numerous call-backs to this beloved 80s movie, the E.T. ride queue is famous for one thing - its smell (though it's currently up-for-debate as to whether this scent has recently been swapped out!) While perhaps not as mind-blowing as the previous two on this list, E.T’s queue is the perfect lead up to the attraction and is certainly one of Universal Orlando’s more beautiful queues.

Although the jury may be out on whether Race Through New York is worthy of its place among Universal’s beloved ride line-up, the queue for this attraction is among one of the most interesting in-line experiences. As you enter Universal's own replica of New York’s well-known 30 Rockefeller Plaza, you can take a wander around a small museum-type space that pays homage to the previous hosts of The Tonight Show.

Once upstairs, Race Through New York’s queue boasts a revolving door of unique features, including a meet-and-greet with Hashtag the Panda, as well as performances from The Ragtime Gals, Jimmy Fallon’s barbershop quartet. The seating areas also feature interactive screens where guests can play games and write their own Thank You notes (inspired by a fan-favorite segment of The Tonight Show).