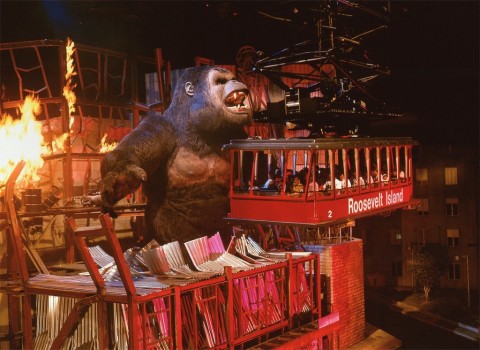 In recent years, Universal Orlando has truly been bringing their A-game when it comes to introducing brand new attractions into their theme parks. While some attractions simply fill a vacant space within the park, oftentimes a new attraction will take over the show building or footprint of another. These ‘replacements’ are typically met with considerable apprehension throughout construction before their grand opening allows riders to experience an attraction that far exceeds its predecessor.

However, not every change is for the better, and every once in a while an attraction comes along that leaves park-goers with that lingering “eh..” feeling.

One of Universal Orlando’s most iconic opening day attractions, Jaws, proudly held its place within the parks until its unfortunate closing in 2012. The ride was (and still is) generally considered to be an all-around fan-favorite attraction, as guests embarked on a boat tour through Amity Island, accompanied by a skipper.

However, such is the sad truth when it comes to theme park attractions, nothing lasts forever and it’s fair to say that when tearing down such a beloved ride, your best bet can only be to replace it with another property that is even more beloved by the masses. Enter the Wizarding World’s Diagon Alley, part of one of Universal Orlando’s most successful and profitable expansions. While Diagon Alley itself is a spectacle, this themed land also plays host to the Escape From Gringotts attraction, an indoor roller coaster that utilizes screens to take audiences on a heart-pounding race through Gringotts Bank.

Having stood strong over in Islands of Adventure since 1999, Dragon Challenge (formerly known as Dueling Dragons) saw two intertwined coasters ‘duel’ as the two would operate simultaneously as though going head to head. After a couple of incidents which saw the ride begin to launch separately, Dragon Challenge, unfortunately, lost its gimmicky appeal, before 2017 saw the attraction reach the end of its service life.

2019 then welcomed the incredibly popular Hagrid’s Magic Creature Motorbike Adventure, which uses innovative technology to create a truly magical coaster worthy of its place within the Wizarding World. Dueling Dragons’ long history in the parks certainly made it a shame to see it go, however, its unique replacement is now one of Universal’s most sought-after attractions.

3. Kongfrontation (now Revenge of The Mummy)

As another of Universal Studio’s opening day attractions, Kongfrontation most certainly holds a special place in the hearts of many. Guests would board a tram to be ‘evacuated’ from Manhattan Island, before coming face to face with King Kong in all of his practical, animatronic glory. Unfortunately, these animatronics proved to be both a gift and a curse as the ride was plagued with technical issues on an almost daily basis.

Its 2002 closure thus opened the door to one of Universal’s best beloved thrill rides, Revenge of the Mummy, Kongfrontation’s more-than-worthy successor. Complete with its iconic pre-show video, 2004 saw the grand opening of Revenge of the Mummy, with the indoor coaster still standing today as a must-do for many guests which, in an ever-evolving landscape of groundbreaking attractions, truly speaks volumes.