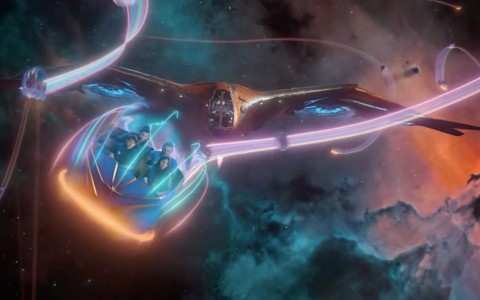 Anticipation for this latest Walt Disney World attraction is at an all-time high, with park-goers desperate to discover what sort of adventures await them. Since there are still a few weeks to go until the ride officially opens to the public, here are a number of other space-themed attractions throughout the Walt Disney World parks that are sure to give you that galactic fix in the meantime.

The old faithful, Magic Kingdom’s Space Mountain is your quintessential cosmic attraction within Walt Disney World. From the twinkly nostalgic music of the star tunnel, to the break neck twists and turns that are sure to have you screaming, giggling, and then screaming again. Space Mountain is a classic for a reason and the perfect space-themed attraction to get you ready to experience the new technology of Cosmic Rewind, in all of its one-of-a-kind glory.

Located in EPCOT, Mission: Space is a much more literal approach to a space-themed ride, when compared to what Cosmic Rewind has in store. Oftentimes a much-debated attraction, some hold Mission: Space near and dear to their hearts while others will avoid it at all costs to save themselves the nausea that follows. However, in all of its intensity, this motion simulator attraction offers a unique experience which mimics an astronaut’s mission to Mars. Now, the only question is: green side or orange side?

A hop, skip and a jump over to Hollywood Studios allows guests to enter into the magic of another one of Disney’s major franchises, Star Wars! Star Tours now stands as one of the lesser appreciated attractions within the park, thanks to the addition of Star Wars Galaxy’s Edge and the two new attractions that came with this new expansion. Join C3PO and R2-D2 as they journey through a galaxy far, far away in another of Disney’s motion simulator style attractions. Keep an eye out for some familiar locations along the way - plus, you might even get picked out as the rebel spy!

One of the most immersive intergalactic experiences on Disney property, the aforementioned Galaxy’s Edge is perhaps the obvious choice when looking to head on a galaxy hopping adventure. While Galaxy’s Edge boasts two innovative new rides, Millennium Falcon: Smugglers Run and Star Wars: Rise of the Resistance, Galaxy’s Edge itself is a stunning and intricately designed landscape that is just waiting to be explored. With surprises at almost every turn, you never know who, or what you might encounter.

A much more whimsical intergalactic adventure, Space Ranger Spin takes riders on an interactive mission through space, and offers a fantastic experience for the whole family. Grab a blaster and help Buzz defeat the Evil Emperor Zurg as you score points by hitting colorful targets throughout the ride. Will you reign supreme as Magic Kingdom’s newest Galactic Hero or will you barely earn your title as a Planetary Pilot?

One of EPCOT’s newer additions (and neighbour to Mission: Space) Space 220 is a dining location that earns its 'attraction' status by offering a truly unique, out-of-this-world experience from the very first moment you enter. Guests are invited to hop aboard a space elevator which then ‘ascends,’ transporting you 220 miles above Walt Disney World, giving you the opportunity to dine amongst the stars with unparalleled views of space. Be sure to keep an eye out as you never know what you might see floating past.

Which one of Walt Disney World’s many space-themed attractions is your favorite?