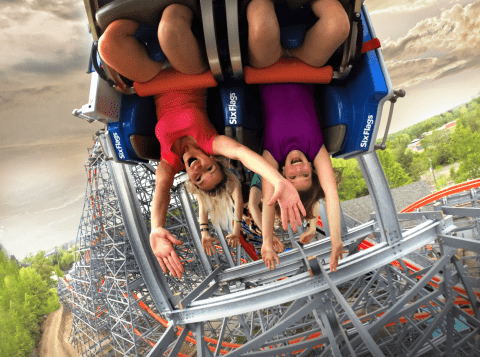 Iron Gwazi at Busch Gardens Tampa is now open! This incredible beast holds the titles for the tallest, fastest, and steepest hybrid coaster in the world.

A hybrid coaster is a coaster that is a blend of steel and wood. Usually, this means a wooden support base and steel track. Many hybrid coasters were, at one time, wooden coasters that were then converted into a hybrid coaster by replacing the track. Rocky Mountain Construction is the leader in converting older wooden coasters into unforgettable hybrid coasters. In adding the new tracks, they can also add new features like inversions and overbanked turns. They also make for faster, smoother rides. From the OG hybrid, New Texas Giant to the newest record-breaking hybrid, Iron Gwazi, these coasters have become a staple in many parks. Here are 5 of the best hybrid roller coasters.

It was a massive wooden coaster, but (from personal experience) it was a painful ride in its later years. It was not a surprise when Cedar Point decided to close Mean Streak in 2016. Thankfully it was given new life as Steel Vengeance in 2018. Steel Vengeance stands 205 ft tall with a 90-degree drop and 4 inversions. It tops out at 74 mph and is also one of the longer coasters on our list with 5,740 feet of track. It also has 30 seconds of airtime!

Goliath stands tall at Six Flags Great America, and it also once held the titles for fastest, tallest, and steepest hybrid coaster when it originally opened. Unlike some of the other hybrid coasters, Goliath was not converted from a previous wooden coaster. This coaster reaches a height of 180 feet and sends riders plummeting down at an 85-degree drop. It has 2 inversions including a 180 degree zero-G roll twist and a spiraling inverted zero-G stall. It is one of the shorter coasters on our list however, with 3,100 feet of track.

Outlaw Run is a mostly wooden coaster located at Silver Dollar City, and some may consider it a wooden coaster. Due to its mostly steel tracks, we are including it on this list. Outlaw Run was the first wooden roller coaster with multiple inversions when it opened in 2013 and held the record for steepest drop. It won best new ride in that same year, beating out another coaster on our list: Iron Rattler. Like Goliath, this hybrid coaster was not built from an existing wooden coaster.

Outlaw Run features 3 inversions including a 720-degree double barrel roll. It sends riders down a 162 ft drop at 81 degrees, and reaches speeds of 68 mph. Unfortunately, it is the shortest coaster on our list at 2,937 feet of track. However, you will enjoy incredible views of the Ozark mountains as you zip and weave through the trees.

Iron Rattler is located Six Flags Fiesta Texas. This coaster originally opened as Rattler in 1992 and stole the titles of tallest and fastest wooden roller coaster from Mean Streak. However, as it aged, many complained it was a painful ride. In 2012 Rattler closed to prepare for its transformation into Iron Rattler including gaining new snake-themed trains. Iron Rattler opened in 2013 and features a one inversion, 4 overbanked turns, a 171 ft drop at 81 degrees. This coaster slithers and slides in an out of a quarry and includes a large tunnel, mist, and lighting effects. It also features the smoothest lift hill of all the coasters on this list.

Twisted Colossus hails from Six Flags Magic Mountain. Originally called Colossus, this dual-track coaster opened in 1978 and at the time it was the tallest and fastest roller coaster with not one, but two 100+ ft tall lift hills. It was even featured in National Lampoon’s Vacation. After 36 years in operation, Colossus closed in 2015 so that it could undergo an overhaul and become Twisted Colossus.

Twisted Colossus opened in 2015 and boasts an almost 5,000 ft long track and comes in at 3:40. Its tallest drop is 128 ft tall and has an 80-degree fall. It reaches speeds of 57 mph and sends riders through 2 inversions. With dual tracks that twist and roll around one another, it is truly one of the most unique hybrid coasters.

What is your favorite hybrid coaster?

More than a Wild Mouse: Cedar Point's New Boardwalk is a Return to the Classics