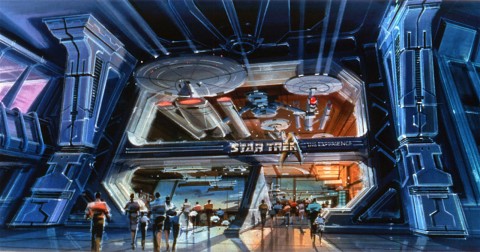 Movies have been inextricably linked to theme parks since their near-simultaneous invention. A year before George Méliès showed moviegoers the moon, inventor Frederic Thompson built it in a Buffalo fairgrounds and charged 50-cents a trip on the world’s first electrically operated dark ride. When Walt Disney wanted his fantasyland put to paper, he enlisted animators and technicians already working at the studio. Universal followed suit when expanding its backlot tour into an international chain of resort destinations - it’s no coincidence that Steven Spielberg serves as executive creative consultant for the Florida park to this day.

The stars, the suspense, the special effects - they’re all complementary from one storytelling form to the other. What’s surprising in the modern arms race for recognizable IP is just how many major film franchises are currently unrepresented around the world. The following six have been chosen for as much for their egregious absence as the likelihood of their eventual arrival.

The first entry on this list is a bit of a cheat considering there exist two Mission: Impossible attractions on distant drawing boards.

Ever since Cedar Fair bought the Paramount Parks subsidiary in 2006, Paramount Pictures has been itching to get back in the themed entertainment game. The decade following is littered with false-starts and dead-end press releases. In 2008, Paramount Movie Park Korea was announced for Incheon, South Korea, with a planned opening in 2011. As of 2021, construction hasn’t started and may be delayed even further due to the coronavirus pandemic. Another new park was announced for Alhama de Murcia, Spain, the year Movie Park Korea was originally supposed to open. As of 2016, the untouched site was rezoned for agricultural use. “London Paramount Entertainment Resort” was supposed to welcome its first guests in 2019. The renamed “London Resort” will only feature certain Paramount properties and may or may not open in 2024, depending on if the Natural England group deems the Swanscombe insect life worth protecting.

If everything goes according to the current plan, Paramount will finally be lighting Mission: Impossible’s fuse in Kent and Korea. Not much is known about these attractions beyond concept art for the UK park. As drawn, the ride, possibly titled M:I Training Center, borrows the Universal SCOOP template, with a trainee vehicle swerving into a dead-end of exploding industry and one Ethan Hunt, airborne.

But for a 25-year-old film franchise, not to mention an additional 30 years on TV prior, it’s almost underwhelming. The Paramount Parks never found a place for it, despite posters around their respective Action Zones. Pretty quickly, at least by the second film’s cliffhanger opening, Mission: Impossible became synonymous with insurance-straining stunts. The scale would have to wait for later installments, but the ingredients have always been there for a live show dedicated to defying death five times daily. Even if the theme park stunt show is a dying art, there’s no franchise better suited to it, and Universal’s Bourne Stuntacular offers tantalizingly high-tech possibilities for the future. Speaking of...

Rumors that the Bourne Stuntacular started as a proposal for another spy-fi stunt show bearing the monogram J.B. were so widespread that some outlets reported the IP as an open secret.  It made sense and makes a little more by the year - according to CNBC, James Bond is the highest-grossing franchise in film history without a major theme park presence.

Universal first made a play at the franchise in the Timothy Dalton era, commissioning the Landmark Entertainment Group of Ghostbusters Spooktacular fame to work on a pitch ahead of Universal Studios Florida. The resulting 007 James Bond Action Spectacular would’ve required a theater no shorter than a volcano lair and no narrower than a submarine parked sideways. The concept art and treatment was all for naught.

Landmark won the long game, though, with the 1998 simulator film, James Bond 007: License to Thrill. It played at seven motion theaters around the world, five at Paramount Parks. By 2002, it was gone. That year provides a hint as to the complicated nature of the license.

License to Thrill proudly featured appearances from Dame Judi Dench and Desmond Llewelyn as M and Q, respectively, putting it line with the contemporary films. Llewelyn, as close as the franchise ever had to continuity, passed away in 1999. In 2002, with the release of Die Another Day, Pierce Brosnan was out as James Bond. With a 00-sized reset on the horizon, where would that leave an ancillary theme park attraction?

Landmark’s website still refers to James Bond as “one of the hardest intellectual property licenses to get in the world.” The company in charge of the superspy, Eon Productions, has been family-run since Dr. No. The 24 sequels and counting only prove the method in the madness - despite all the infamous product placement, Bond is a very hard man to buy. A theme park attraction would have to thread a very fine needle to get the greenlight. Who’s playing Bond in it? If there’s answer, there’s also an expiration date. Foregoing a famous face - License to Thrill sidestepped one by putting riders inside 007’s head - still leaves the intangibles of MI6. Which M? Which Q? Which supervillain? And how does it all translate into a 4-minute experience?

James Bond will return, it’s just a matter of how.

The Lord of the Rings

J.R.R. Tolkien’s Lord of the Rings fantasia occupies a similar IP purgatory, sitting just a few rungs lower on the same CNBC list as Bond. It’s one of the last white whales in the increasingly sparse licensing sea. Unlike MI6 or a Mission: Impossible, though, it offers breathtaking scale. Not just an attraction, not necessarily even a land. It’s the rare franchise that could, should anyone be so ambitious, support its own park.

Middle-earth has been whispered around Universal Orlando Resort long before Fellowship of the Ring won its four Oscars. The first genuine smoke to that particular fire came in 2010, when it started showing up in guest surveys. The rumors didn’t much matter - Tolkien protected his work fervently and his estate honored that. Anything before the surveys was a pipe dream, anything after, wishful thinking. The loophole came with a 2012 lawsuit, in which the Tolkien estate claimed New Line Cinema, a subsidiary of Warner Bros., was licensing out rights it didn’t have in the first place. That includes slot machines, video games, and, at least hypothetically, theme park attractions.

The suit was voluntarily dismissed in 2017 by all parties involved and the theme park rumor mill churned into overdrive. With Warner Bros. already on speed-dial for Harry Potter expansions, could Universal finally land the greatest fantasy franchise of them all?

It’s all still guesswork and alleged insiders for now, with some targeting Toon Lagoon as the eventual home of ents, wargs, and the resort’s second gold-hoarding dragon. Wherever Middle-earth does land, if it ever does, the possibilities are almost too vast to imagine. A recreated Hobbiton like the original set, still open four tours in New Zealand? A bow-and-arrow shooter through the Battle of Helm’s Deep? An orc restaurant where meat is always on the menu?  There are six films, an upcoming TV show, and, depending on what the rights entail, libraries of Tolkien writings left untapped. Once The Lord of the Rings finally becomes real, there won’t be much left under the sun to adapt.