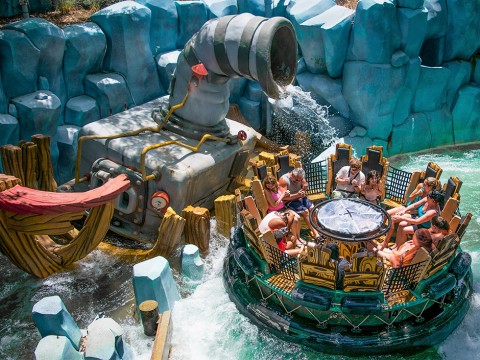 Summer is fast approaching in Central Florida and that means one thing - ice cream melting at speeds previously thought impossible. With most of the covid restrictions pulled or in-process, the parks will soon look like mouse-eared moshpits once again. There’s always Dole Whip, Freestyle machines, and air-conditioning, but even those have been earning their own considerable queues lately. Should you or anyone you love find themselves in desperate need of cooling off, these underrated means of external hydration might come in handy.

Even the wait boards seem to forget about ol’ Fievel. You’ll only notice him at the very end of the list, right before the attractions repeat.

Since its grand opening on July 5th, 1992, Fievel’s Playland provided an overdue and now long-winded response to criticism that Universal Studios Florida didn’t have enough entertainment for kids. It has survived flashier offerings like A Day in the Park With Barney, gone toe-to-toe with upgraded contemporaries like Curious George Goes To Town, and outpaced the cultural footprint of its own source material.

And it’s still a good time.

KidZone may strike theme park scholars as a sore thumb starting to bruise, but its accidental dead-end serves a purpose. No matter where little ones want to play, parents can keep them reasonably cornered and their freedom reasonably free. By design, Fievel’s Playland appears small to passersby. Modern grown-ups with guests in the target demographic might not even realize there’s more to it than the oversized spigot and expected teeter-totters. Modern guests of any age might not even realize it’s home to the Studios’s first, last, and only water ride, discounting Jaws.

As a flume, Islands of Adventure has it beat. As a slide, Volcano Bay leaves it in the dust. But as an oasis in a concrete desert, it does the trick. It’s daring enough for kids seeking a challenge - three stories tall and 200 feet long - and wet enough for parents seeking relief.

The bad news is most of the water goes straight to the hindquarters. The good news is there’s never much of a wait.

With the opening of the shiny, new Velocicoaster, Jurassic Park has never been busier. The first floor of the Discovery Center, once a quiet place to take a break and learn about genome sequencing, is now an epicenter of frantic activity. But it’s the island’s other playground that remains underappreciated and, more tragically, underexplored.

Camp Jurassic is tricky. It’s the evolutionary descendant of Fievel’s Playland. The choke point for parents to catch their kids is even tighter. The grounds, even more hidden. Any given rider on Pteranodon Flyers might not even realize there’s more to it than the queue. But that’s the game - as soon as you start wandering, it never seems to end.

Caves lit only by the glow of unmined amber. Familiar footprints that inspire unnerving noises from the underbrush. Slides, nets, and look-out towers. Oh my.

But there are also two water features, obvious and otherwise, that make due on those August afternoons.

On one side of the mountain range, a showdown awaits. Dilophosauruses lie in wait on the jungle floor. Tranquilizer turrets stare them down from a guard tower. It doesn’t matter who shoots first - there will be no (dry) survivors.

The real treat, however, is on the other side of the mountain range, in more ways than one. Inside Camp Jurassic’s tallest peak there’s a cavern. Keep following the tunnels and you can’t miss it. What’s still very possible to miss is the geyser. Past spelunkers might’ve walked right over and never even noticed.

When you come to the net bridge that disappears into volcanic steam, ignore your instincts and take a load off halfway across. Sometimes the effect isn’t working. Sometimes it takes a second longer than you’d expect. But before too long, those bubbling vats below will blast you right in the undercarriage.

How wet is it? Enough to provoke subhuman sounds of disgust from those caught unaware. Loiter accordingly. The scenery alone is worth it.

Rare is the ride that keeps a short line purely out of cowardice. There are but two kinds of Islands visitors, those who have braved Bilge-Rat Barges and those who get in that short line.

Unlike the catty-cornered Ripsaw Falls, there’s not much to see from the sidewalk. The starboard view from Me Ship, The Olive provides a peek and a warning - feel free to soak passing riders but note their preexisting saturation before the water cannons.

Without having any metrics on hand, it’s still a verifiable fact that this is, gallon for gallon, the wettest attraction in Central Florida. Factoring out splashdowns, it even beats some dedicated water slides.

In true Universal fashion, Popeye & Bluto’s Bilge-Rat Barges was, is, and remains the biggest, baddest, and best raft ride around. Expect anything less than an above-ground drowning at your own peril. But the sacrifice is worth it, provided the forecast is hot enough.

The queue casts you as collateral damage in the latest tiff between life-long rivals Popeye and Bluto. It starts out as switchbacks for “Popeye’s Paradise Cruises,” only for a few well-placed obstacles to divert visitors into “Bluto’s Bilge-Rat Barges.” If you know the relationship of these galoots, then you already know the plot forwards and back, but the details here are among the most overlooked in the park. There’s charm before the carnage and, if you spin the right way, during.

Bilge-Rat Barges is too often written-off as the Islands fire hose when it’s really a high-water mark of its kind, pun appropriately intended.