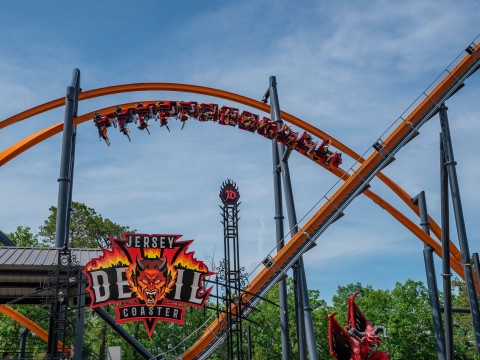 This week, Six Flags Great Adventure began previews on their latest attraction, Jersey Devil Coaster, a thrilling, airtime-packed addition from top-tier manufacturer Rocky Mountain Construction. Jersey Devil is named after the legend of the same moniker, and soars over the trees and waters of New Jersey, pulling riders directly into the tale. This coaster, debuting as the tallest, fastest, and longest single-rail coaster in the world, packs an 87-degree drop, three inversions, and high speeds of up to 58 mph in its 3,000 feet of RMC’s groundbreaking I-beam track. The stats are impressive on paper, but cannot begin to capture the thrill of this unique and groundbreaking coaster.

RMC’s single-rail model, commonly referred to as the “Raptor,” falls under the umbrella of a steel coaster, though the narrow track and one-per-row trains allow for tighter turns and more drastic maneuvers than your typical four-across Bolliger and Mabillard looper. Jersey Devil is the fourth iteration of a Raptor, though the other three models (RailBlazer at California’s Great America, Wonder Woman Golden Lasso Coaster at Six Flags Fiesta Texas, and another new-for-2021 coaster, Stunt Pilot at Silverwood Theme Park) are near-clones of one another, making Jersey Devil the first original layout for a Raptor coaster.

This demon of a coaster is a stellar addition to Six Flags Great Adventure’s lineup. WARNING: SPOILER ALERT

Riders will approach the entrance area near Nitro, as mentioned, right on the water on the outskirts of the park. The ride entrance is decked out in red, orange, and black to match the coaster itself. The theming is gothic-inspired, with black wrought iron spires and a massive sculpture of the Jersey Devil guarding the line entry. The line itself has a decent amount of theming for a Six Flags park, a chain known to be more focused on thrills than aesthetics, with signs found at various corners of the queue outlining the legend of the Jersey Devil.

Riders will ascend a small staircase to the station, pass behind the dispatch booth, then board one of the twelve in-line seats, which—ideally—are always moving through the station during boarding, making for a strong throughput, perfect for Great Adventure, one of the more popular Six Flags parks. These trains may add to the sense of eeriness and excited fear for some riders—not only are they affixed with the Jersey Devil himself on the front car, but riders have no one to their left or right, only sky and bright orange track.

Seats are equipped with same over-the-shoulder restraints found on other Raptor models. The soft restraints are quite comfortable on the ears and neck, but be warned: the restraint will push down further throughout the ride if you’re not careful. I learned my lesson after my first ride, my lap bar crushing my legs, but if you hold the restraint up for moments of positive G-force (namely the bottom of the first drop), the restraint will stay put.

While RMC’s past iterations of the Raptor took advantage of the single-rail through compact, right-maneuvering turns, and sharp drops, Jersey Devil goes for a different approach. Jersey Devil follows a more standard “out and back” layout, hauling—as the layout's name would imply—out and back from the station in three head-spinning laps. The coaster has a longer, narrower footprint than its predecessors and takes advantage of more sweeping movements.

Don’t get it twisted, though: this coaster isn't for the faint of heart. Jersey Devil is not without its whipping turns and ejector airtime moments. The ride starts with a quick (and noisy) trip to the top of the 130-foot lift hill, and in the back rows riders are absolutely yanked down the first drop, rising out of seats to catch some great airtime going into the first inversion, a raven turn. Next is a sprawling camelback hill. This is one hill that feels a bit tamer for the model. The smooth yet effective airtime hill is similar to one you’d find on a Bolliger and Mabillard Hyper Coaster like Mako at Sea World Orlando or Nitro, which happens to be right next door to Jersey Devil. Next the coaster goes through an RMC staple, a zero-G stall.

Next riders will pop up into a raised helix turnaround. This helix is fun and a decent turnaround, but isn’t the most forceful, and probably won’t make you gray or black out. The drop off the turn overshadows it, providing a nice pop of ejector airtime. Riders will fly past the station and into the final inversion of the ride, a zero-G roll. This inversion is as smooth as you’d expect from RMC’s past rides.

The ride hits a mid-course brake run, and gives another nice airtime moment as you drop off it. Then, a banked 180 turn starts the final and—in my most humble opinion—best lap.

Don’t get me wrong: RMC’s tall, grand elements are stellar. But their low to the ground bunny hops and banks can be even more thrilling, as you really feel the speed you’ve picked up throughout the ride. The final lap consists of three bunny hops—one banked to the left, one banked to the right, then one straight-on. Banked airtime hills are another RMC classic, now being adopted by manufacturers like Bolliger and Mabillard and Intamin. The trick of these elements is that they give riders sideways airtime, which is something you’ve got to experience for yourself to fully grasp.

The ride has a long brake run, but not without good reason: Between the mid-course and final brake run, Jersey Devil can run four trains at once on high-capacity days. Between that constantly-moving station and four twelve-seater trains, this coaster can move far more guests than you’d think, considering it’s limited to one rider per row.

I scored a couple rides on the Jersey Devil—one in the front, one in the last row, and a bunch in the middle. My personal recommendation? Back row all the way. The front row offers an interesting experience, being that there’s nothing in front of you nor to your left or right, but simply cannot compare to the rate at which you’ll be pulled through the layout in the back row.

It’s worth noting that the ride did have a bit of a rattle when traveling over the areas where pieces of track were bolted together. That’s not to say it’s a rough ride—not even close—but for a brand new RMC, it wasn’t as buttery-smooth as I’ve come to expect.