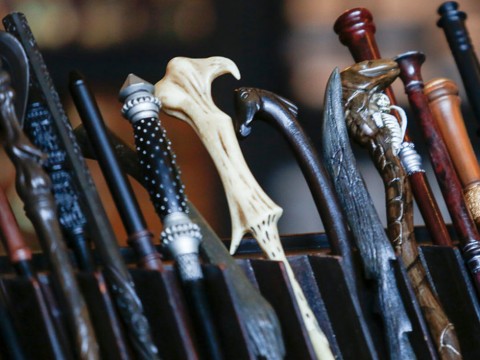 For fans of themed entertainment design, time might as well be measured in years A.P. – After Potter. After all, the 2010 opening of the Wizarding World’s first half (Hogsmeade at Islands of Adventure) reset the rules of theme park expansions, officially replacing the era of the E-Ticket with the age of the “Living Land.” Thanks to the Wizarding World, guests didn’t just want to “ride the movies;” they wanted to shop where their favorite characters shop; to eat where they eat; to step where they step!

So when the Wizarding World’s second half (Diagon Alley at Universal Studios Florida) debuted in 2014, it brought with it the next leap for designers seeking “in-universe” souvenirs: the interactive Wand. Guests (literally) lined up to fork over Muggle dollars for wands capable of bringing Diagon Alley’s windows to life, quickly leading to the ret-conning of simpler effects back in the original Hogsmeade. Today, more than two dozen spells dot the two lands of the Wizarding World, but we’ve collected eight of our favorites… and two totally-unmarked secret spells you may not even have known exist…

It’s not every day you find an animatronic outside of a ride, yet the window of Diagon Alley’s Magical Menagerie goes one further. Not only are there a number of fantastic beasts in the wizarding pet shop’s window; you can affect them. For example, with a cast of “Silencio,” the tweeting phoenix-feathered bird in the shop window finds itself frustratingly voiceless. The same can’t be said for the croaking toad nearby.

Though Zonko’s Joke Shop is filled with spectacular “in universe” novelties (like Sneakoscopes, Extendable Ears, Screaming Yo-yos, and U-No-Poo capsules), one of its more clever sights is in the window outside. There, the Incendio incantation seemingly arms fireworks and sparklers which rise up in the window. Spinning pinwheels, twisting visuals, and flashing lights give the impression that the whole thing’s about to blow, but burnt out fuses save the display.

Aguamenti – the spell that generates water – is used to wonderful effect in Diagon Alley’s Carkitt Market. There, a proper casting of the spell will cause a bronze frog to spit a pleasant stream of cool water directly into a stone basin… an actual, magic-activated drinking fountain! However, cast the spell incorrectly and the mermaid statue within the fountain will instead send a stream of water sailing over the caster’s head, splattering against an unsuspecting onlooker.

A visit to the dark and sinister Knockturn Alley is really a walkthrough attraction in its own right, especially for wand-holders. There, unfurling the Wizarding World’s spell map will reveal hidden markers (visible only under blacklight) leading to a window with a dozen strung-up shrunken heads. The sinister display turns out to be in good fun – the macabre choir sings a number of songs (including a rare Easter Egg hinting at the land’s former life…) and can be momentarily silenced with the spell Mimblewimble.

4. The Bellows & the Blacksmith

One of the many glance-in scenes set up in Diagon Alley, the Blacksmith Shop is a two-fer. Casting Locomotor will power the rise and fall of a very large accordion bellow, stocking really-for-real fire in the blacksmith’s forge. Reparo, meanwhile, will cause a suit of armor topped in disarray to rotate and reassemble before the caster’s eyes… before falling apart once the spell’s effect wears off.

Especially effective at night is the spectacular Incendio’s effect on Flimflam’s Lanterns – a second-storey shop in Diagon Alley. The crooked shop is filled with all manner of candelabra and chandelier, suspended in beautiful multi-level windows looming over the land. With a flick of the wand, a wave of warm, gorgeous light overcomes the entire shop, its windows filled with a magical, glittering appearance.

If you wander down Horizont Alley (and toward the land’s “public conveniences”), you’ll spot an ornate metal carving of an arm holding an umbrella aloft from the building’s cornice. Apparently shielding wizards from the infamous rainfall of Orlando (er… uh, London) the architectural feature’s usefulness backfires with the casting of Meteojinx. With a flash of lightning and rumble of thunder, the umbrella itself begins to spout water all around – a nasty surprise for anyone leaving the restroom at the wrong time.

One of the more fun (but lesser known) spells in the Wizarding World resides once more in Knockturn Alley. In the shop window of the eerie Dystal Phaelanges, various unnerving medical accoutrements and odd herbs make the sinister shop seem downright scary. But with the casting of an unnamed spell, the disturbing medical sketches cycling through an old-school slide projector turn to that of a skeleton… which then mirrors the caster’s moves! Dance, shrug, jump… the skeleton on the screen will do as you do!

Believe it or not, there are (at least) two totally secret spells in the Wizarding World, neither marked on the map or by a spell-casting medallion. Technically, your best bet for getting them right is to ask a resident of Diagon Alley for help. But here’s a hint…

Once you’ve bought your quills, ink, stationary, and wax seals at Scribbulus, head outside to view the blank parchment in the shop’s window. Aim at the parchment, trace an upside-down “V” in the air, then re-trace it backwards. That should cause black ink to spill across the paper, revealing an ad for invisible ink! Repeat the spell for further “hidden messages.”

Probably the coolest secret spell in the Wizarding World, though, resides at Slug & Jiggers Apothecary, right along the main drag in Diagon Alley. Its window is filled with jars of herbs; unusual dried plants, and some… uncommon remedies, like a barrel of dragon dung. Cast correctly over the barrel (we recommend a capital “A”) and the dung will bubble and grow in size, nearly overflowing as it hisses and steams. The unorthodox ingredient then releases a sulphur smell, which seeps out into the street. How... magical?