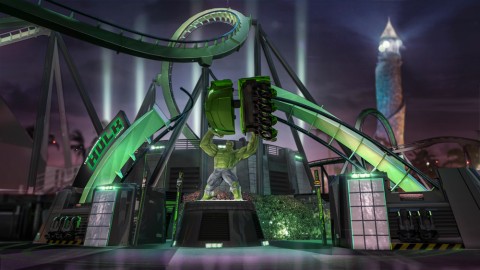 The Incredible Hulk Coaster opened alongside Universal’s Islands of Adventure in 1999. This may look at first like your standard Bolliger and Mabillard sit-down coaster, but inside the coaster’s enclosed lift hill, this ride hides a secret. Not only does this ride feature an inclined launch, but a tire-drive launch. This mechanism is more common for gradual accelerations and decelerations you may find on a dark ride or family coaster, but Incredible Hulk takes advantage of it to propel riders to 40 mph in two seconds. Those stats may not stun compared to S&S or Intamin launches we see today, but there’s something about the launch’s incline matched with the story, music, and lights that gets your chest absolutely pumping.

The ride, like so many Bolliger and Mabillards before it and many after it, however, became a rough ride after years of operation. This is one of the headlining rides at a major world theme park; its operations allow for almost 2,000 riders per hour, and it’s not uncommon to find this ride with a 2-3 hour wait in the park’s busier seasons. From 1999 and through the oughts, this ride moved masses—and I mean masses—of guests. And roller coasters, being little more than massive chunks of metal and/or wood, wear over time. They only have a certain amount of rides in them; they have an expiration date, every one of them, right from the start. Bolliger and Mabillards can and have stood the test of time (just look at Kumba an hour down I-4), but with Incredible Hulk moving thousands of guests a year, its aging was sped up.

As mentioned above, roller coasters are glorified chunks of metal. Modern technology allows for track profiling that can provide a smooth ride, but over time, under heat and force of trains traversing the layout, the metal wears and warps. Because of this, trains will not hug the track the way they’re designed to. It’s not dangerous, just not comfortable. Bolliger and Mabillard’s models specifically face this issue, many of their coasters falling victim to the slightly-charming “B&M Rattle,” as it’s called. The Incredible Hulk Coaster was a major offender of the B&M Rattle, and the riders its victims.

So what do you do when a ride is reaching its expiration date? You can scrap it, like Universal did with the dueling B&M invert a short walk away, or you can bring it back to life.

In September of 2015, Incredible Hulk Coaster closed to the public. Universal was tight-lipped about it as Universal so often is, but the reason was clear to anyone paying attention: Incredible Hulk was getting a complete re-track.

Re-tracks are common enough. Plenty of rides will replace small sections of their track in the off-season. But what Universal did here was different. What Universal did here was, essentially, replacing the original Incredible Hulk Coaster with another Incredible Hulk Coaster—almost completely identical, but brand new nevertheless, with revamped trains and onboard audio.

A piece of Incredible Hulk’s original track stands on display today at the ride’s entrance, greeting riders into the history and iconoclast nature of the coaster they’re about to experience.

When Hurricane Katrina devastated New Orleans, it took with it the area’s largest theme park, Six Flags New Orleans. Opening as Jazzland in 2000, Six Flags acquired and renamed the park in 2003, bringing with it an array of new attraction and upgrades, including their obligatory Batman clone.

You can’t throw a rock at a Six Flags without hitting a Batman: The Ride clone. Batman clones are Bolliger and Mabillard inverts that feature a curved drop straight into a vertical loop, followed by a series of four more inversions over the rides’ roughly 2,700 feet of track. Monotonous as they are, Batman clones are not bad rides, per se; they’re still B&M inverts, and I’d be hard-pressed to admit there’s a B&M invert I don’t like, even the ones that make my ears sore from head-banging.

Six Flags New Orleans’s Batman: The Ride clone was, as the moniker clone would suggest, no different than the rest, from its blue and yellow paint job to its hard over-the-shouler restraints. The ride actually started its life in 1995 in Japan, but was moved over to the states in 2003 along with Jazzland’s acquisition. But when Hurricane Katrina swept through and brought with it a massive storm surge in the area where Six Flags New Orleans sits, the ride stood firm. Firm enough that, though its park would not reopen, the coaster would run again one day.

After 2005, the ride remained standing but not operating until 2008, when it was relocated a couple hundred miles west, to Six Flags Fiesta Texas. You can still take a ride on this coaster today, now operating under the alias Goliath (any Six Flags fan knows that, like Batman clones, a coaster named Goliath can be found at almost every park), at the beloved San Antonio park. And though yes, it’s just a Batman clone, it holds within its supports a story of perseverance and resilience.

I wish you included international coasters cause Psyke Underground is incredible

I would like to encourage to rewrite the Phoenix section after doing a little research. While you mention ACE seven times, you completely ignore the one person most responsible for making the project happen - industry legend Dick Knoebel. Dick was the person who decided that relocating a wooden roller coaster was the best way to add one to his family's amusement park. He was the one who spent years searching the country for the right candidate to relocate and was the one who selected the Phoenix, which was owned by a long time family friend. Dick was the one who made the project happen despite the entire industry saying it was not feasible. His park paid for the project which spawned an new generation of wooden roller coaster designer and builders such as Charlie Dinn, Clair Hain, Mike Boodley, John Fetterman and Leonard Adams. ACE was a much newer and smaller organization than it is today and had pretty much nothing to do with the project and they certainly did not provide any financial assistance. To be blunt, this article is an insult to Dick Knoebel and his family's remarkable amusement park.

Thank you for your comment. The article has been updated to reflect the amendments and additions noted.

Thanks, Dick Knoebel is really a remarkable person who, along with his family have created an amazing amusement park and has repeatedly defied the skeptics by doing things that no one said could be done. His seven year effort to recreate an old style flying turns was another example.