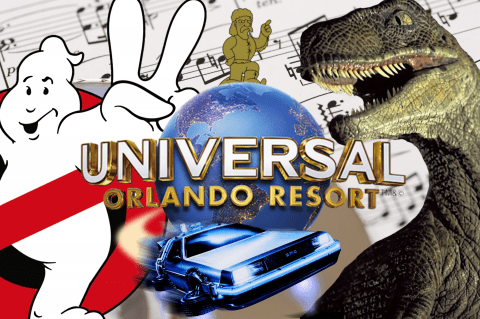 There’s a strange alchemy to theme park music. It’s most often compared to film scores, as befits the cinematic origins of Disney Imagineering and Universal Creative, but that doesn’t quite do the difference justice. Several cues from movies, famous and otherwise, are included below, each originally tuned and timed for the greatest emotional impact of a infinitesimally specific moment. A goodbye kiss. A forlorn look unanswered. A historic bolt of lightning. Take away that meaning and the music sounds different. A theme park soundtrack is as much about placemaking as it is scoring thousands of infinitesimally specific moments every day. Sitting on the curb for an afternoon parade. Holding a date’s hand for the first time in a jungle gym of switchbacks. Taking in one last look before the long walk back to the parking garage. Unlike a movie with a carefully composed score, there’s truly no telling which memories will last and to what accompaniment. Fortunately, Universal Orlando has no shortage of hits.

Back to the Future - Universal Studios Florida Front Gate

This may be a ringer, but for good reason. Without Back to the Future, Universal Studios Florida wouldn’t exist.

Hollywood’s 30-foot-tall King Kong animatronic might’ve convinced Steven Spielberg that Universal could build an attraction to rival the competition, but Back to the Future convinced him the studio could build an entire park to match.

Though Back to the Future: The Ride missed Universal Studios Florida’s opening day by almost a year, the reckless soul of its source material was already poured into the park’s foundation; Christopher Lloyd reprised his most famous role for a promotional video so early it had to be faked at Universal Studios Hollywood.

As soon as ride footage existed, Back to the Future: The Ride took point on all the commercials and Alan Silvestri’s iconic score was adopted as the de facto theme of Universal Studios Florida. It became the very sound of “Riding the Movies.” For a while, at least.

In 1996, T2-3D took some of its thunder as the new standard in theme park entertainment and semi-sequels. With the infamously misguided advent of “Universal Studios Escape,” the park became a resort and “Riding the Movies” was no longer the only amenity. Doc and the Delorean still appeared occasionally in commercials, but the theme never left the ‘90s. As HD TVs and internet advertising exploded, Back to the Future: The Ride quickly ran out of road. All of its press kit materials were mastered in the finest standard definition of 1991. Short of clips from the actual films, there wasn’t much to show. By the 2007 release of Universal’s first planning DVD, it was already gone.

But the music lives on. The orchestra still echoes between the studio arches. It means what it always did - Ride the Movies - but now matters more as a history lesson than mission statement. Universal doesn’t often indulge nostalgia, but that driving Back to the Future theme strikes a warm, fuzzy chord with any long-time visitor.

As much as the park has changed, the spirit endures. At precisely 88 miles-per-hour.

Universal Studios Florida has the Back to the Future theme. Islands of Adventure has “Ocean Trader Market.” Both are bone-deep sonic reminders that you’re not in Kansas or Kentucky or wherever you flew in from anymore. To paraphrase a resident alien of the resort, you’ve arrived.

Technically speaking, Islands of Adventure has a dedicated entrance theme - “The Call to Adventure” - but it plays about as frequently as “Ocean Trader Market” but never as long. Besides, only one of the two tracks follows you in.

When Universal Creative hired soundtrack producer John Rust to give the Islands auditory life, he didn’t have much to go on besides concept art. What would a land of cartoons sound like? What kind of instruments do Seuss characters play? Does Spider-Man dig techno? The park was his oyster. For the more traditionally orchestrated themes, he enlisted William Kidd, protégé of the great John Williams and accomplished composer in his own right.

Anyone disappointed that the bombastic “Call to Adventure” or its end-of-day inversion, “The Adventure Lives On,” didn’t make this list should take solace in the credit - William Kidd did it all. The composer wrote all of the music for The Lost Continent and Port of Entry, as well as one song for Seuss Landing.

None of them, however, set the scene as well as “Ocean Trader Market.”

It starts quiet, simple, faraway. A lonely xylophone. The twinkle of enchanted windchimes. Intermittent bird calls. Rhythmic claps. It’s as much music as it is noise, the easy heartbeat of a city too weird, too wonderful to ever exist. But it does, and just when you start to believe it, the wistful strings swoop in and carry you away.

Islands of Adventure was the first theme park with a completely custom soundtrack upon opening - even EPCOT Center borrowed some Alan Parsons Project. The 1999 and 2000 CD releases flirt with triple-digit prices on Ebay, if they show up at all anymore. Scarcity notwithstanding, there’s a good reason for the price.

It’s some of the most transportive music ever written for a theme park, and “Ocean Trader Market” is as transportive as it gets.

Universal Creative gets due credit for raising the bar in themed environments with Hogsmeade and Diagon Alley, but those achievements tend to overshadow a much earlier, but no less impressive feat of entertainment design - New York.

The area’s origin doesn’t do it any favors in the mythmaking department. Universal’s New York was built to be a good-enough fake. It was so good, in fact, that it lured at least one Disney production - the Sylvester Stallone vehicle Oscar - away from their own New York sets. Building the facades to withstand up-close theme park crowds was a secondary objective. Any intermittent chintz could be written off as movie magic.

But look past the painted flats of the New York Public Library and you’ll find a living, breathing borough, or at least a still-life approximation. Nazarman’s Pawnshop shows off its latest wares behind glass. Exhausted passersby have their pick of stoops. Alleys honeycomb the block, all the way from Hackenburg Appliances to the waterfront. The closer you look, the more detail you’ll notice. It’s a testament to the original design and construction that, even as the rest of the park has transitioned away from the backlot blueprints, New York has remained largely the same.

What it’s missing, at least on a slow day, is a little vitality. The Blues Brothers make their daily appearances, sometimes with another singing show to carry the load, but there’s very little activity past Delancey Street. Though the antique cars date it with a shiny, chrome bow, New York used to be a lot livelier.

The Ghostbusters alone had two different street shows on stages that haven’t been used since. That’s not to mention how often they’d cruise around town in the Ecto-1 or, on special occasions, join the late-night Finnegan’s crowd for a singalong. Though there were other residents of NYC over the years - a revolving door of licensed cartoon characters, The Shadow, etc. - none of them gave it quite the same pulse as the Ghostbusters.

Besides the newspaper clipping in a Race Through New York façade and the Firehouse that’s long had its serial numbers filed off, the only other trace of the franchise is hidden in plain sight, invisible to anybody not intimately familiar with the soundtrack of Ghostbusters II.

Howard Huntsberry’s cover of Jackie Wilson’s “Higher and Higher” still bounces around the backstreets. It’s not hard to notice - the rest of the music loop is all showtunes and Sinatra. Once upon a time, that loop also included cues from Elmer Bernstein’s metro-magical score for the first film. Now all that’s left is an infectious outlier, a pop celebration of New York City from a pop celebration of New York City.

To quote the movie it came from: “New York - what a town!”

John Williams had to show up somewhere. His work on the E.T. Adventure and Wizarding World would crowd, if not clinch the honorable mentions. But the most interesting Williams cue on property is the one he only wrote.

Arranged by Lou Forestieri as part of John Rust’s Islands of Adventure soundtrack, “Jurassic Park Calypso” is exactly what it says on the tin. The immediately iconic theme trades its grandeur for effervescence. The flute and steel drum are so light they might blow away with the afternoon storm. It’s a marked and breezy departure from the other Williams scores at Universal, which are all more or less pulled clean from their cinematic sources.

“Jurassic Park Calypso” tells a story. It may sound like a temp track from a Sandals commercial, but that’s the point. It is the theme song to a Jurassic Park that never existed, not even within the fictional universe of the films. It’s how an actual resort, free from corporate espionage and (most) technical difficulties, would sound. The borrowed notes aren’t meant to inspire the franchise-standard awe, but a cozy familiarity. It’s still a jungle paradise with genetically resurrected dinosaurs, but here you can stop the admire the electric fences. The danger in this Jurassic Park is only on demand.

Besides its easy-listening charms, “Calypso” also begs a fun meta-fictional question: Does the Jurassic Park theme exist within the world of Jurassic Park? The closest analogue is Octopussy, the thirteenth James Bond adventure, in which a foreign contact gets 007’s attention by playing a few notes of his iconic theme song. Is it a code for something? Is the John Williams score a dramatic take on a hypothetical ad jingle?

“Jurassic Park Calypso” offers no such answer, but it does have a lot of steel drum. And that’s even better.