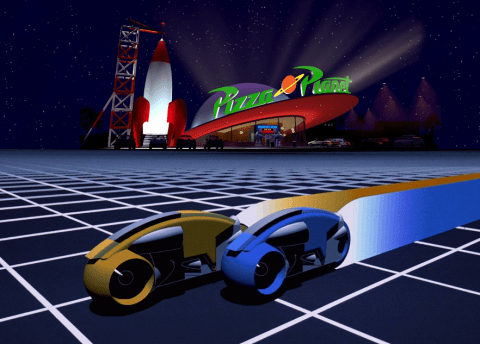 The golden age of Walt Disney World arcades came to a legislative end in 2013 when a vaguely phrased Florida state law aimed at online gambling in internet cafes incriminated just about every form of ticket redemption game. Most Central Florida theme parks dialed back their prize counters in the years since, but none more ferociously than Disney. Some arcades were hollowed out for their square footage, others were walled off entirely like they never existed at all. Legally bound or otherwise, these are just the latest footnotes in an illustrious history of lost Walt Disney World arcades.

It remains a black mark on Disney’s record that, to date, the company has never built a movie-accurate representation of Pizza Planet. Disneyland’s curiously named “Alien Pizza Planet” took over the former Redd Rockett’s Pizza Port and at least looks like it if you squint, thanks to the Tomorrowland surroundings,  but the interior is a standard theme park cafeteria without so much as a single arcade game. Disneyland Paris’s Pizza Planet at least had a non-functioning replica of Toy Story’s iconic claw machine, but the restaurant was hastily thrown together in a glorified tent and finally put out of its misery last year when park brass deemed it “Disney unworthy.”

That leaves the former Disney-MGM Studios Pizza Planet as the closest thing to the real deal, at least philosophically speaking. Visually speaking, it was always dead last. The building that housed it, covered by crumbing New York City facades for the Metropolitan Department of Water and Power and Philo’s Fish Co., was built to match the Muppet*Vision 3D complex across the courtyard. When plans for an elaborately themed Swedish Chef restaurant fell through with the passing of Jim Henson, the space became a makeshift showroom for movie props, most prominently from Disney’s 1991 blockbuster hopeful The Rocketeer. When the Studio Showcase officially moved across the park to the end of the Backstage Studio Tour a few years later, the space became the Studio Arcade.

In December of 1995, less than a month after the release of Toy Story, Pizza Planet took over. Imposing statues of Buzz, Woody, and Mr. Potato Head hung out on the roof. A painted flat of a rocket ready to launch marked the building’s highest point. Inside, the red brick remains of the Swedish Chef plan were partially covered by murals of the Planet and claw machines as far as the eye could see. The centerpiece, a one-of-a-kind facsimile of the oversized machine from the movie, offered plush aliens to anyone brave enough to sacrifice their quarters.

The pizza, by most accounts, was only marginally better than microwavable. But when any self-respecting kid is surrounded by that much electric joy, there’s no accounting for taste.

Pizza Planet, though, never stayed the same for long. Three-eyed alien refugees from the 1996 Toy Story parade were suspended from the ceiling. Mr. Potato Head disappeared out front. Buzz, Woody, and the Toy Story billboard followed suit a while later. Even the little figures over the register disappeared, leaving Buzz off-center and alone. The big red claw machine was one of the first games to go. Its lesser colleagues were slowly replaced with more seating and games that offered no threat of victory.

By 2015, Pizza Planet offered more air-conditioning than arcade fun, with only some of the lower level devoted to the kind of flashy credit-munching games found at any given Dave & Busters. On January 19th, the restaurant was closed for a refurbishment. Ten months later, it reopened as PizzeRizzo, completing the circle as a Muppet-themed eatery in a building designed for one 25 years earlier.

It has no games, though the pizza has allegedly improved.

When Space Mountain first opened in 1975, guests didn’t exit through anything at all, save some glorified ads for RCA. The drastic New Tomorrowland makeover of 1994 fixed that oversight. Under FedEx’s sponsorship, the moving walkways that used to spill guests straight back out to the park diverted them to the Tomorrowland Light & Power Co. instead.

The new structure, built on a plot originally reserved for a Walt Disney World Railroad station and themed as the land’s power plant, fit the cog-and-chrome aesthetic nicely. It only announced its intentions to non-riders with the words “Video Arcade” over the traditional entrance.

At its height, the Light & Power Co. arcade offered a full 8-car fleet of competitively connected Daytona USA cabinets. That’s not to mention the more ordinary offerings of free-throw basketball shootouts and air hockey tables. Like Pizza Planet, the variety declined over the years, winnowing down to the same few outsized adaptations of mobile games and Disney-branded pinball machines. Like Pizza Planet, the Light & Power Co. arcade closed without fanfare, in early 2015.

The non-retail half of the building was cleared out and walled off. Small alcoves with massage chairs and photo booths were eventually cut into the former arcade space. Even though the moving walkways were scrapped and the route reworked, Space Mountain still exits into the Tomorrowland Light & Power Co. The “Video Arcade” signage out front is gone. To date, nothing has replaced it.

It’s impossible to talk about lost arcades at Walt Disney World without at least mentioning the biggest arcade it ever lost.

The pitch was attractive - the arcade of tomorrow, with virtual reality attractions only Disney could design - but the execution was a tough sell - the arcade of tomorrow, at prices only Disney could charge. The first DisneyQuest opened with Downtown Disney West Side on June 19th, 1998. The second location opened in Chicago the following summer. Ground was broken for DisneyQuest Philadelphia and announcements were made for DisneyQuest Toronto.

It survived until 2017 as Walt Disney World’s vestigial park, too cheap to compare, but expensive enough to fool unwary travelers. As soon as Regional Entertainment gave up the reins, DisneyQuest languished. Most of the opening-day virtual reality lasted to the bitter end, the cutting edge looking duller by the decade. Attractions were carpeted over, blotted out of directional signage with duct tape, or abandoned entirely in plain sight. What was brought in to even up the odds? More and more arcade games.

DisneyQuest featured several dedicated arcades from the very beginning. There was the Game Pit, a series of themed rooms showcasing the latest and greatest games lorded over by a gritty dropout from Disney’s Gargoyles. The Race Zone was like it said on the tin, all pedals and steering wheels. The Replay Zone, as the name implied, dealt in more traditional arcade games. They had the usual retro suspects - Pac-Man, Donkey Kong, etc. - but also a few oddballs like Marble Madness. In its later life, DisneyQuest probably boasted the world’s largest collection of Wreck-It Ralph arcade cabinets. It was also one of the few places on property to play a pinball machine that didn’t have Iron Man, Jack Sparrow, or any given Guardian of the Galaxy on it. The Explore Zone was built with a maze in the floor that guests could navigate with remote-control cars. Once that proved finicky, similar-enough driving games like Jambo! Safari and Let’s Go Jungle! were brought in to compensate.

By the end, DisneyQuest was a ghost of itself. In its closing months, Florida residents could pick up tickets for 25% off, annual passholders for almost half-price. Everybody else still paid $45 to experience the future of 1998 and an impressive collection of games most resort arcades already had.

You can still lose what you almost had, and a Coming Soon sign in Future World is almost enough.

Long before Test Track became Tron-in-all-but-name, the genuine article was supposed to anchor Communicore West. What better way to represent Disney’s idyllic future than the summer smash that revolutionized special effects in film?

Like the rest of early Epcot, the Tron Arcade would’ve asked a question - “What’s in a Game?” The closest thing we ever got to an answer was on the sign: “Lasers...Simulators...Robotics. Enter an Extraordinary New World of Electronic Micro-Magic!”

It’s tough to translate hypotheticals, but given the one piece of concept art that escaped Imagineering and what’s known about Disneyland’s planned sister arcade, there’s room for educated guesses. The art deems at least part of the space “Game Grid,” like the wireframe battlefield where all of Tron’s famous challenges took place. Guests surround what appears to be a high-tech cross between Pac-Man and air hockey. Geometric stalks of red and blue code hold up the ceiling like digitized Greek columns.

Disneyland’s version would’ve reportedly pulled from the original ImageWorks bag of tricks. For instance, instead of using blue-screen technology to composite guests into a movie, the Tron Arcade would’ve composited them into an interactive video game. Epcot’s version might’ve steered closer to traditional arcade fun, however high-tech, since it already the park already showcased the same exhibits not a five-minute walk away.

Too bad Tron itself was more than a little hypothetical. When the film opened, just three months before EPCOT Center, it did enough business to become Disney’s highest-grossing live-action film in years. Unfortunately, that said more about the dire state of the company’s live-action slate than it did Tron. Even its ground-breaking special effects didn't break as much ground as hoped - the Academy of Motion Pictures Arts and Sciences refused to nominate it for Best Visual Effects on the grounds that using computers was cheating. Disney wrote off the film’s budget, around $17 million, and forgot about the franchise non-starter until growing cult fandom inspired the sequel, Tron: Legacy, a franchise non-starter for a whole new generation.

That corner of Communicore West played host to temporary exhibits until Expo Robotics took over in 1988, fulfilling at least one of the words promised by the Coming Soon sign. The real estate once set aside for the Tron Arcade is most commonly known today as Club Cool, the home of Coca-Cola’s refreshingly free soda-based Russian Roulette.

The entire south end of Innoventions West closed in late 2019. It was leveled not long after in preparation for Epcot’s Festival Center. As of July 2020, little further progress has been made on the site. Due to the economic strain imposed by the necessary months-long coronavirus closure, Disney officials announced they will be “taking a different approach” to the space than previously planned. Though it’s unlikely the Tron Arcade is included in that different approach, fans can get their fix at the Magic Kingdom when Tron Lightcycle Run opens in 2021, just behind the Tomorrowland Light & Power Co.

After working a bit, for Walt or Mr Walt as Dad called him, Dad n Mom went on to structurally develop the USA version of Industrial Manufacturing Corporation’s Version of Trade Show exhibiting.